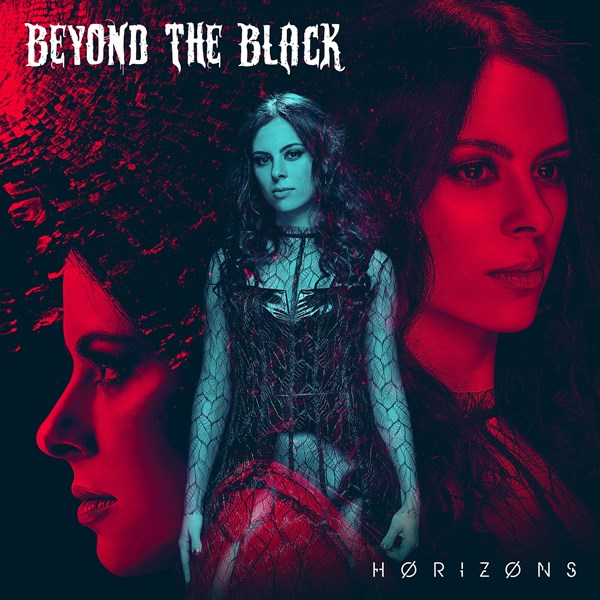 `Hørizøns’ is album number 4 since the band’s formation in 2014. A productive streak delivering some of the stronger tracks in the symphonic metal genre. Their albums are a fluctuating collection of songs fusing the best ingredients of rock and metal with keen symphonic elements, pompous power and ear mingling pop melodies. But Beyond The Black is foremost the band led by Jennifer Haben with her wide range and commanding vocals. `Hørizøns’ front cover artwork prominently features the band’s leading lady. It’s nothing like a siege for that matter but rather knowledge of who’s the centre point of attention and action in the band. That being said I cannot do anything other than conclude this choice to be spot on. On the new album the band deepens their sound and pushes the envelope with Haben leading gloriously.

From the title track onwards the album enrols like a rollercoaster ride that unites symphonic bombast and densely orchestrated section with finger licking fine melodies and an (almost) arena rock panache from the eighties. They don’t sound dated, don’t get me wrong. It’s just that the songs intensely bounce upon the larger than life attitude of those heydays of hairspray and instantly catch on with ya. Each and every song is top shelf and none miss the mark. ,,Misery” for instance could have been featured on a dance program without straying from the rock blueprint. Its opening is slick and the melody is infectious suddenly diving deep with loud riffs and dense keys. It takes a little time to get into the track, but once you’re there, you understand BTB reached higher ground. It gels tremendously well and it is probably Jennifer’s finest vocal delivery to date. The way she switches from her pop register into her rousing rock attitude is impressive. She matches that vocal grandeur constantly with a fistful of tracks evolving with every spin.

,,Some Kind Of Monster” is another poppy outing no band can deliver with such ambient and honest performance. Sublime (tiny) vocal interaction adds just the right amount of attractiveness over the riff and keyboard driven track. The guitar tandem Tobi Lodes/Chris Hermsdörfer lays down intense hooks and forceful riffs propelling the track. Supportive, yet dense keys add extra vigour. All perfectly arranged and constructed, genre specific. ,,You’re Not Alone” is another example of the quality of both players seamlessly interacting with the electronics and symphonics. Blistering riff and fierce solo accolading their stride and the song’s valour. More etheric are genre specific songs like ,,Wounded Healer” (featuring Elize Ryde) that unites two of the finest in the genre unloading in new Amaranthe-BTB territory. The mandatory ballad can be found in ,,I Won’t Surrender” with nice piano-cello arrangements and Jenn delving deep in her emotions to bring across the message. It differs from ,,Out Of The Ashes” where Haben belts another exquisite performance. Its piano-vocal eluding from its strain when the song starts welling with power and Jennifer and Chris interact on a high level. Absolute hammer track is the intensely slick and epic ,,Human” with electronic ingredients and powerful orchestration during the epic chorus. It’s that keenly embedded synth pop and Rammstein reminiscent electronic beats that enhance the band’s sound on `Hørizøns’. Tension spawning and intensely elevating their music with industrial modern groove it feeds the heavy riffs and symphonic dominance more than ever. They repeat the trick with the insanely driven and gripping ,,Welcome To My Wasteland”, predominantly driven by its heavy riff and hooks.
,,Paralyzed” is the perfect symbiosis of elements where high paced powerful riffs and electronic elements pull forward underneath a pop injected chorus that will be the danceable crowd pleasure at their shows. It bares those grandiose arena rock marks without any of the hair metal ingredients present. Beyond The Black’s unique appeal and trademarks shooting root. ,,Golden Pariahs” pushes boundaries even further with its intensity symbiotic fuse of elements and Haben’s scattering and demanding vocals radiating. Kai Tschierschky’s dynamic drumrolls give the songs the needed powerful appeal with Stefan Herkenhoff’s low-end bass sealing up the overall sound. The band grown and operates as a unit on `Hørizøns’, striking a homerun with another live cracker on the glorious ,,Marching On”. Pulsating drum and bass underneath the rousing electronic beats inter-laced with the pushing subdued guitars are blended with insane sticky melodies and chorus. In between all the vocal excellence of Jennifer Haben the band falls back on Hermsdörfer’s echoing vocals adding the right amount of variety and stride for the album.

Beyond The Black certainly widens their horizons on the new album, reaching higher ground. Their sound has matured and the new ingredients dominate the sound that unloads with magnified attitude and is marked by top shelf performances on all 13 tracks. I’m flabbergasted by the infectiousness of the pop structures and sticky melodies that blend perfectly with the electronics and powerful riffs. Variety is key and with ‘Hørizøns’ Beyond The Black puts an exclamation mark behind their name!
—