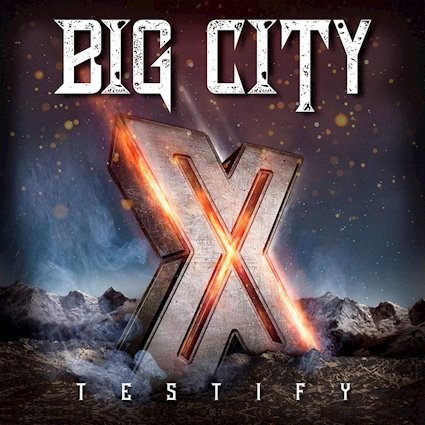 Big City is a melodic metal band from Norway and has signed a multi-album deal with Frontiers Music. Founded by guitarist and songwriter Daniel Olaisen the new album `Testify X’ is their third studio effort. This is the first one for singer Jørgen Bergersen and I must say that he has a pleasant voice. He probably has even more to offer but I am sure that will definitely come out later.

Regarding the songs I can only say that this is a record that flirts with some of the leading acts in the music business. You certainly hear influences from bands like Queensrÿche, Firewind and in terms of sound, sometimes even Dream Theater. Purely as a sound reference, since the band is much less progressive and leans much more towards the melodic side. Just listen to the guitar sound on ,,Running Away’’.

,,Conception’’ starts with a amazing heavy guitar riff, that could have easily been on a classic Savatage record, but then it slows down for the verse and slowly picks up pace for the melodic chorus. A turn that I find quite a shame, since the opening of this song really is a blast. The whole album is of a pretty decent nature and well produced. What I do miss are the sharp edges. Everything is too much within the lines to make it really exciting.

I have the feeling it is in there, but it’s not quite coming out yet and that’s actually a shame. Musically these guys can definitely break some ground, but this doesn’t quite translate into the songwriting yet.

Having said that, I’m glad to hear a band that has the balls to operate in this musical part of the genre. Certainly not a bad album, with some very strong moments.