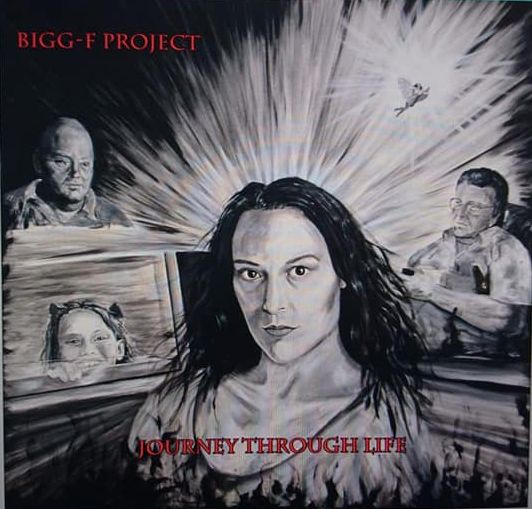 This is a project/concept CD manufactured, written and composed by Djuri Boot (guitar/keyboards) and the singers Frank van Zon and Edwin Balogh. They got some assistance from a bunch of male and female singers like John Jaycee Cuijpers who is currently fronting Praying Mantis and Cindy Oudshoorn. The storyline is in short about a young woman’s journey through life, the many ups and down she encounters and finally sinking away in the darker side of society. The music can be described as a combination between heavy rock, progressive and symphonic rock and it must be said that on a musical level Bigg F Project sounds at moments impressive. You can hear that on the production level not everything is superb (the drums sound a bit on the thin side) and there is also this typical Dutch problem with singing. Van Zon is the main vocalist on this record and he does have an accent and a not so big reach. Not saying that he does an awful job but it might have helped the project if guys like Balogh and Cuijpers would have had a bigger role. The way a song like ,,Run’’ has been worked out with several singers is more like it should be. ,,Run’’ is definitely one of the better tracks on ‘Journey Through Life’ with excellent arrangements and a length of more than 10 minutes that are to say intriguing at the least. All in all not a bad effort from Dutch soil but we have to be honest as well. This is more a record for the local market, not so much a product that you can take abroad because of the above mentioned reasons.