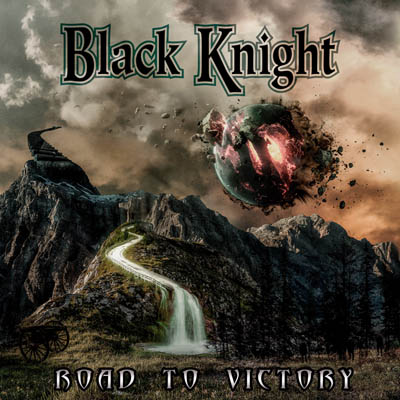 Hailing from the capital city of The Netherlands Amsterdam the power metal formation Black Knight makes a comeback or is it a re-appearance? The band around drummer Rudo Plooy (the only remaining member since their start in 1981!) has been on and off duty, releasing some demo tapes and two records (‘Tales From The Darkside’ in 1999 and ‘The Beast Inside’ in 2007) and recruited some new faces through the years for a new start in 2020. That the band has stayed true to their eighties/nineties roots becomes very clear and obvious when you hear the eight power/heavy metal monster songs the band has recorded with guitarist Gertjan Vis producing and mixing and the famous Danish producer/engineer Jacob Hansen doing the mastering of ‘Road To Victory’. Black Knight has certainly not chosen for a modern sound. The songs are dominated by furious riffs, crushing solos, lots of twin guitar attacks, they have all got a fast pace and rhythm in which vocalist David Marcelis can unleash his high pitched singing with conviction and power. What I like the most about ‘Road To Victory’ are the superb duels between Vis and the other guitarist Ruben Raadschneiders. Together they form a deadly duo by firing their riffs and solos the way they see fit throughout your speakers. At moments you can hear a slight Iron Maiden connection in the material. But mainly these boys follow their own lead on songs like ,,Pendragon’’, the powerful title track and the two best songs of the album ,,My Beautiful Daughters’’ and ,,Crossing The Rubicon’’. These two songs are a bit longer than the rest and especially here the tandem Vis/Raadschneiders reach an excellent level, as does the rest of the band as the songs are full of mood swings. It might not sound super original at times (critics might find it even too old fashioned) but there is plenty of melody and variety on the album to give fans of old fashioned power/heavy metal value for money. I dig this hope you will as well!