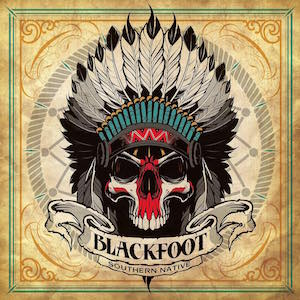 Together with Lynyrd Skynyrd and Molly Hatchet Blackfoot has kept the southern rock movement alive in recent decades. Albums like ‘Tomcattin’, ‘Strikes’, ‘Medicine Man’, ‘Marauder’, ‘Siogo’ and ‘Highway Song Live’ are vital CD’s that should be present in any decent rock music collection. A couple of years ago founding member Rick Medlocke reformed a younger version of the band consisting of four unknown musicians. Rick saw it as his task to help the new outfit by being their mentor, help them with song writing and give them a sort of direction without being in the band himself, as he is working with Lynyrd Skynyrd. Now it is time to present this line-up to the world with the album ‘Southern Native’ produced by Medlocke who also contributes some slide guitar parts. According to the veteran musician the new Blackfoot is a combination between old school and new school. I have been listening to ‘Southern Native’ almost on a daily bases and I still have mixed feelings. The band sounds with singer/guitarist Tim Rossi a lot different if you compare this stuff with the original band. That different that you might have to wonder if it would have been better to have chosen a different band name. Because people will have certain expectations based on the past of the band and this new line up sounds different. But then using the name and banner might get you noticed a bit quicker as people might want to hear what you are about. Sure there are some southern rock influences there, but not as many as I had expected (or hoped for). Blackfoot 2016 is more comparable with a group like Black Stone Cherry. And maybe that is a good thing. Anyway, there are some good songs to be found on this record like the title track for instance. The riff of that song has been sticking on my mind for days now, while ,,Everyman’’ is a very sensitive song with thoughtful lyrics and some excellent guitar work from Rossi and second guitarist Rick Krasowski. Opener ,,Need My Ride’’ is a straight forward hard rocking track and ,,Whiskey Train’’ brings back some memories of the old sound. But what I do miss is a classic song, something in the style of ,,Highway Song’’ or ,,Guitar Slingers Song And Dance’’ with two or three guitars fighting out a heroic duel. Now we have to settle for ,,Diablo Loves Guitar’’, a latin flavoured instrumental tune that you might expect more from a guy like Carlos Santana. Different, I admit, but a bit misplaced perhaps. Hopefully my remarks have not put you off and I hope you are willing to have a go at ‘Southern Native’ and listen to it with an open mind. Because, at the end of the day, it is a decent record.