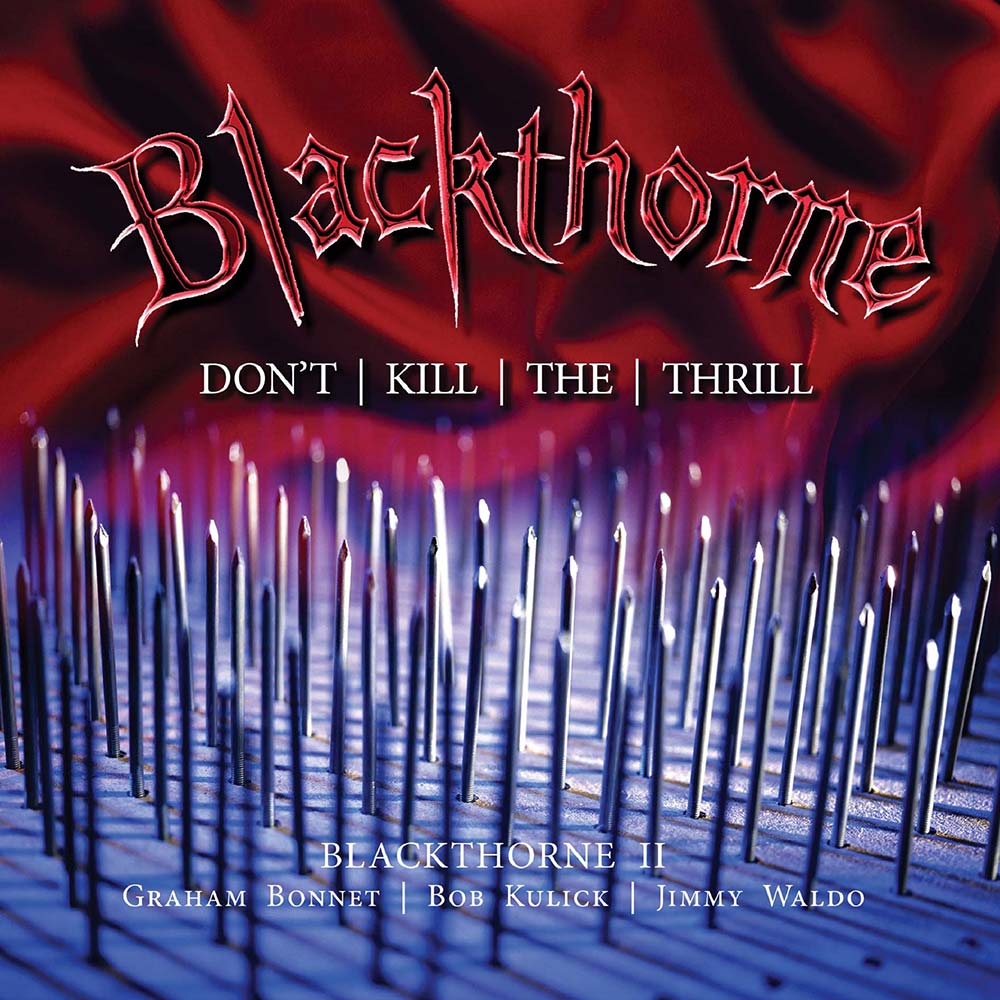 A little while ago singer Graham Bonnet released his brand new 2-CD ‘The Book’. On the second CD Graham recorded some classic rockers that he recorded earlier with Alcatraz, MSG, Rainbow and Impelletteri. From his time in the band Blackthorne with guitarist Bob Kulick, bass player Chuck Wright, keyboardist Jimmy Waldo and drummer Frankie Banali he re-recorded nothing. In 1993 the group released an excellent CD called ‘Afterlife’. I remember that I was scheduled to interview Graham and Bob in Amsterdam, after speaking to Bob earlier face to face when he released the Skull album ‘No Bones About It’. But the interview with those guys had to be done by phone. I remember Kulick explaining why they did not make it to Amsterdam. A little story that turned out to be typical for the short time that Blackthorne existed. As they entered the plane in Los Angeles they did not get the seats they were supposed to get. When they complained they both were booted of the flight, having to do all their interviews by phone. Nothing went right for the band. Soon after the release Banali bailed out. Gigs were hard to come by. Promoters wanted the band to play for peanuts so there were no tours for them to jump on without losing money. And when they had a gig on the Foundations Forum in Los Angeles (a prestigious yearly industry event were new bands were presented for media and management) the fire alarm went off during their set and the building had to be evacuated. And maybe the band also suffered from the Nirvana/Seattle grunge effect. While making demo tapes for their second album Chuck Wright left as well. When finished Bonnet realised that he had not seen his family in Australia in ten months and he pulled the plug on the project returning home. Kulick and Waldo recruited David Glen Eisley (ex-Giuffria and ex-Dirty White Boy) and went on under the banner Murderer’s Row (one album in 1996). Now that second Blackthorne album sees the light of day. On the eleven tracks you can just hear how pissed off the band must have been with their lot. Bonnet sounds heavier than ever before, he screams his head off and the songs have a heavy yet very dark character. Great to hear them after all this time and it is a pity things did not work out for them. There are also some interviews to be heard and a bunch of live recordings recorded during the few gigs the band did do. I know Bob Kulick as a true blue musician and they must have offered him a good financial deal for these live recordings, otherwise I cannot explain why this muck has been pressed on a second CD. The bulk is recorded badly, you can hardly hear what is going on. The only track that sounds decent is an acoustic version of ,,We Won’t Be Forgotten’’, recorded somewhere in Japan most likely for a radio or TV station. It would have been better if only the eleven tracks of the second album would have been released. Now these shitty live recordings ruin the pleasure of listening to this CD. Now they have killed the thrill a bit….