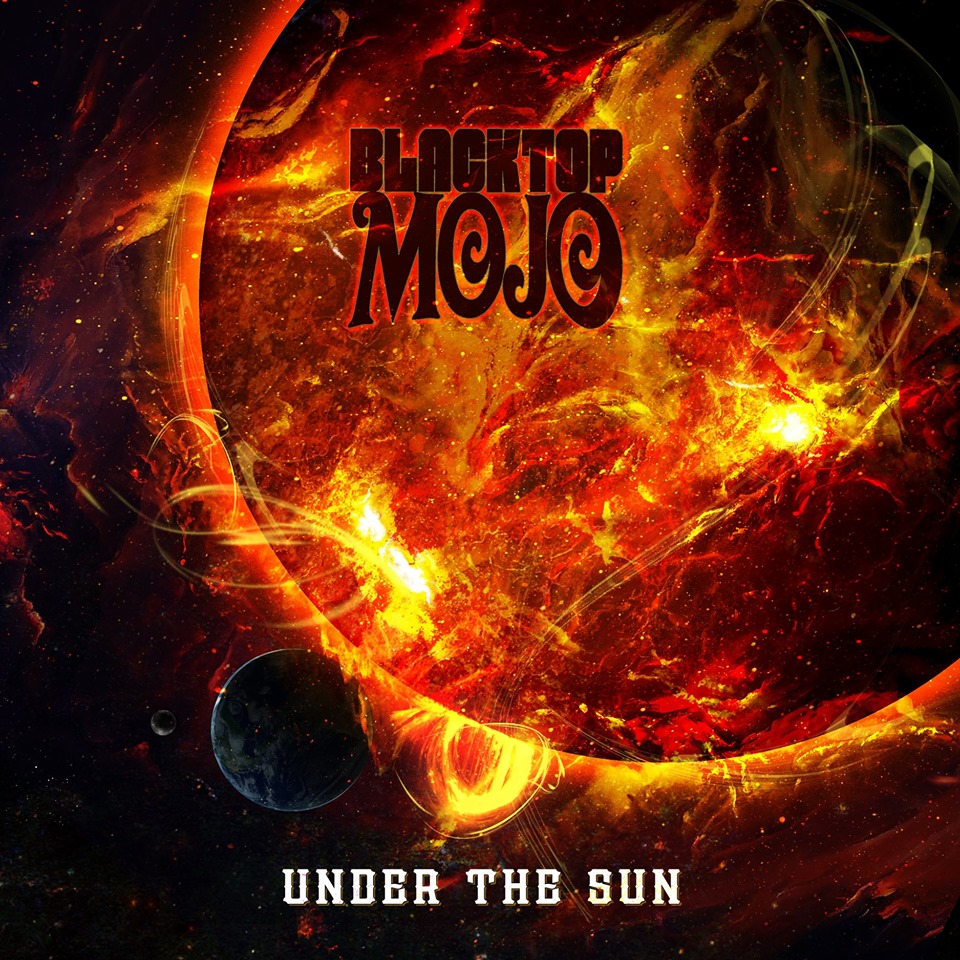 Upon the release of their 2nd album `Burn Your Ships’ I already mentioned Blacktop Mojo to be one of rock’s up and coming stars. The album packed intensity and grim passages, but also harnessed perfection with oozing melodic outburst such as the profound ,,Prodigal”, one of my favourite tracks of the last 2 decades. Blacktop Mojo’s music is a blend of southern riffage, roaring powerful vocals and towering melodies combusted by top of the bill musicians. Their debut (`I Am’) already hinted their prime status, but the follow up really pushed the envelope. With this 3rd album `Under The Sun’ dropping, I’m interested if the Blacktop brotherhood manages to grip onto stardom.

As the album reached my inbox I instantly got excited as I frequently dubbed the band one of rock’s hopefuls. Little hesitative `Under The Sun’ made its first spin in my car stereo. Commuting to work the new album slowly nested in my head. Blacktop Mojo’s specifics are very much in place, but the band has morphed slightly, making their songs gaining depth and momentum more than ever before. The brotherhood increased and the cohesion benefits with intensifying strive. Their debut single ,,Can’t Sleep” immediately makes crystal clear that their typical sub notes are intact and the memorable hooks are pristine packing tremendous power. But there’s more to it. The deeper layers are more dominantly holding back their beauty, revealing more of their glorious power with every spin. Pitched hovering solos are studded with serenity while bass and drum interaction of Nathan Gillis and Matt Curtis is insanely dominant. Fierce riffs are subdued to the all over determination of the song. The track reveals more and more of its grandiose melodic intensions with every spin and nests beyond. An impressive calling card for the new release per se. “Come stand at the edge with me…” Matt James howls ,,The Void” alive with impressive turbulence. Somewhat dejected the song propels with a sombre tendency blooming with uplifting musical interaction and jaw dropping solos. Contrasting tone of guitarists Ryan Kiefer and Chuck Wepfer is intense and adds more contrast to the dark matter propelling the track slowly evolving the duel into a twin solo with impeccable harmony pitches. Tremendous power packs in this intense guitar interaction pushing the tracks like a thrust engine redefining Newton’s third law. Combusting constant spawning waves of emotions for Matt James to flex his intense and charismatic voice around. The man is gifted a voice tone warm and affective oozing emotion. More soulful than ever before he belts an impossible job on the raw energetic title track. There’s heartfelt agony and intrinsic gut emotions scattering off the palate. He showcases his skills vaulting from full-throated hollers to mournful lows and anxious howls. The long-held existential sorrow combusts in the chorus pushing to the lyrical edge to delve deep into Iommi like riffs with a scattered echoing crash cymbal hit.

The title track packs all the typical ingredients and also embarks onto more tentative terrain with almost progressive bass and guitars. Powering up for a whammy solo the song kicks into gear with echoing guitar accolades powering up for James’ howling vocal escalation. Though deeply rooted in the Southern Rock area of metal, the band also brings new poise to the plate. Developing and widening their sonic expedition with more bluesy deep elements like on the adjective dark ,,The Lashing”. Throbbing bass pulls forward over gritty cinematic western guitar winds howling. Much like reviving the “Once upon a Time in the West” grit and gravel with Matt bringing a widely appealing comfort. Another pearl in the Blacktop Mojo crown is the ebbing emotional ,,It Won’t Last”. Deep touching blues with staggering musical interaction and a Hammond spicing up the organic feeling casted. “The best thing about these feelings…. It won’t last” croons into a slide guitar embellishing the songs sturdy slow pace, packed with delicate vocals and musical interaction it grips deeply. It’s these slow movers much needed to break from the combusting overall power of `Under The Sun’. ,,All Mine Now” spits rawness and breathes fire with a chorus reminiscent to the vocal line of ,,Jumpin’ Jack Flash” before Stones hit the ,,Gas, Gas Gas”. Tapping a different vein with their guitar interaction Kiefer and Wepfer pave way for a gospel-like choir interaction with hand claps adding to Americana high notes. Distorted guitars open the lashing ,,Keep” which packs equilibrium to the edges of sanity. The outcall of love that is packed in the bad to the bone lyrics has James touching deep and howl his anger and agony over the low-end bass that opens to the high pace mid section. He literally shoots it into the stratosphere while howling operatic and primal disgust. Swinging the axe and burning the fret board in stop-and-go-motion towards the end, empowers the striving vocals of Matt.
Classic rocking out Blacktop Mojo switches style without adjusting their benchmark ingredients on ,,Come Get Your Coat”, the BM twisted ‘lovesong’. With the songs pumping bass and fierce riffs midway, and hovering guitars over the zealous instrumental section, the song dies out with towering inferno. Tribal drum rolls and plunging bass precipitate to catapult the listener into the vigorous ,,Lay It On Me”. It is exactly why the band ignited my spark in the past and keeps on luring me in. Strings being bend to emphasize the welling undertone and morph into anger packed dominance. It’s exactly that dominance reoccurring on the impressive power sprouting from ,,Set It Free”. It is heartfelt and hot-blooded with brooding accents landing in the foreground. Matt James again interacts with the sizzling guitars of Kiefer and Wepfer inciting one another’s emotions. A broken time signature injects the complexity to boost the tracks drive. The agony is casted from James’ howls and hoarse voice.

With the musical interaction intensifying and their thrive towering to great heights, Blacktop Mojo not only are one of rock’s hopefuls, they might well be the best for rock to happen. `Under The Sun’ is an intense and insanely driven album packing power and poise and adding to the bands orbiting status. With Matt James at the helm, the brotherhood has a gifted frontman with an extraordinary voice injecting tremendous charisma differentiating them from the genre. His tone adds the specific edge and grandeur the music needs and generates the drama spiting from `Under The Sun’. He naturally manages to modulate up to higher range and double the effort needed, or gradually tones down to intensify his performance.
Blacktop Mojo genuine and honest to the freakin’ bone. Blacktop Mojo’s `Under The Sun’ sends shivers down my spine repetitively and chills me to the bone while firing up their engines constantly.