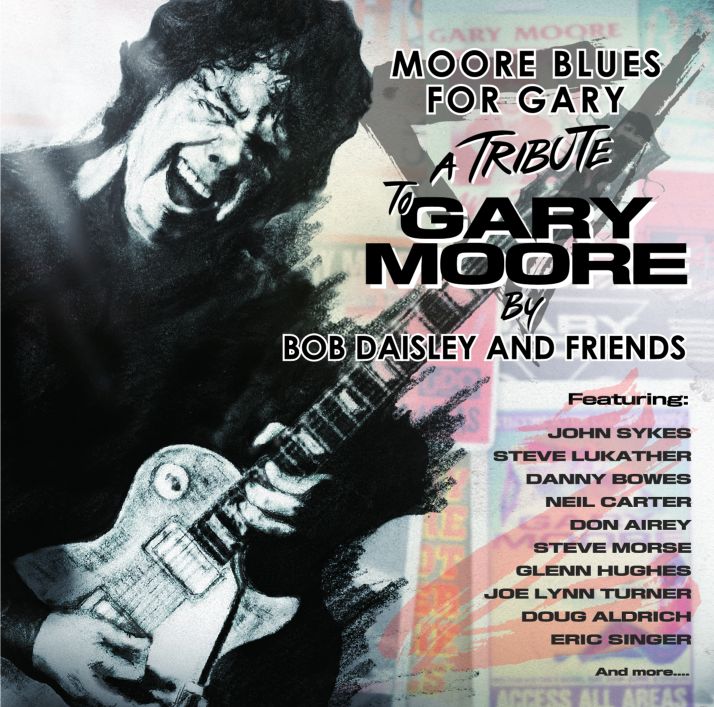 I remember it like yesterday. I was right in the heart of Perth City in the early morning of Monday February 7, 2011 on my way to do a delivery when the news on the car radio mentioned the fact that Gary Moore had suddenly died of a heart attack in the early hours of February 6 while on holiday in Spain. Dazed and confused I parked my vehicle by the side of the road and just boiled my eyes out. The same happened to me when I heard that Phil Lynott passed away. I don’t have that many musical heroes in my life but these two guys were definitely on that list. Both Gary and Phil left behind an enormous musical legacy to enjoy and remember them by. We are now confronted with an album that remembers Gary’s music. For many years Gary Moore enjoyed the reputation as a phenomenal guitar player while his singing was getting better by the album. He enjoyed success with his hard rock albums like ‘Corridors Of Power’ but things really took a turn for Gary when he recorded the blues album ‘Still Got The Blues’. The album catapulted Gary’s career to new heights. I always said that it was like he took a musical holiday and came back with more pocket money than what he left with. Gary continued with the blues until his life was cut short on that fatal day. What was so special about him? For me it was that unique tone in his guitar playing and a certain warmth in his voice. I miss that man every day. One of his old band mates, bass player Bob Daisley (Rainbow, Uriah Heep) took the initiative to put this album together and he found plenty of big names that were ready and willing to lend their talent to celebrate the music of Gary Moore. For myself I find it a miss that his hard rock period is more or less neglected on this album and that the focus is on his blues period (1990-2011). I mean a version of ,,Out In The Fields’’ should have been included in my opinion. From his rock period only the ballad ,,Empty Rooms’’ (on this CD featured in a slightly slower version in comparison with the original) has made the cut and ,,Parisienne Walkways’’ of course. Anyway, as for the rest there is nothing to complain I guess. ,,Still Got The Blues (For You)’’ (the biggest hit for Gary) has been done justice by guitarist John Sykes and the singing of Thunder’s Daniel Bowes is just exquisite. Glenn Hughes and Joe Lynn Turner both shine on tracks like ,,Nothing’s The Same’’ (Glenn) and ,,The Blues Just Got Sadder’’ (Joe), there is a brilliant Steve Morse on guitar during ,,Parisienne Walkways’’, there are contributions from Doug Aldrich, Don Airey, Damon Johnson, Jeff Watson and many more. Also Gary’s two sons Jack (guitar) and Gus (vocals) are there paying their respect with the song ,,This One’s For You’’. ‘Moore Blues For Gary’ is a fitting tribute. It does not cover the whole of Gary’s impressive career but maybe a part 2 could solve that problem. If you are asking me if any of these versions on this album comes close to the original I would have to say no (although ,,Still Got The Blues (For You)’’ is superb), but then you are talking about Gary Moore one of the most brilliant musicians that ever walked on this earth. Some songs just can’t be improved I guess but nevertheless ‘Moore Blues For Gary’ is as close as we are going to get to Gary Moore so Bob Daisley and all of his friends deserve our thanks and appreciation for letting the light shine one ‘Moore’ time on a top class musician.