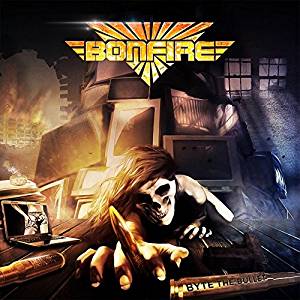 In the beginning of last year Bonfire parted company with singer David Reece who went on to form his much acclaimed group Sainted Sinners which also features current Bonfire guitarist Frank Pane. The German veterans recruited new singer Alexx Stahl who makes his debut on ‘Byte The Bullet’, produced by lead guitarist and undisputed band leader Hans Ziller. As you open the CD you’ll find an inlay dedicated to a former Bonfire musician Horst Maier-Thorn who died in February 2017. A very nice gesture of Hans Ziller and company. So how is the new singer doing? Quite well, Stahl has a good rocking voice, although his influence on the compositions on this CD is absolutely zero. Most songs have been written by Ziller, bassist Ronnie Parkes and Frank Pane. ‘Byte The Bullet’ is a solid CD with some good hooks, heavy guitars, plenty of melody and a strong sound. So far, so good, right? Eh yes and no… On the lyric department the band comes up with one cliché after the other. I know it is difficult to be original nowadays as all the topics have been covered more than once, but sometimes it just sounds so obvious and predictable. And I don’t also understand why Bonfire always seems to re-record their old songs. How many times can you make a different version of one of their better tracks ,,Sweet Obsession’’?! And what is the use of the track ,,Friedensreich’’ which is just some people goofing around with words? It is not that ‘Byte The Bullet’ is a bad album. There are several good moments there like the Jethro Tull cover ,,Locomotive Breath’’, but at the end of the day I had expected a bit more. Maybe it was not such a good idea to get rid of David Reece as he delivered the goods with his band, while Bonfire seemed to have made little progress since his departure.