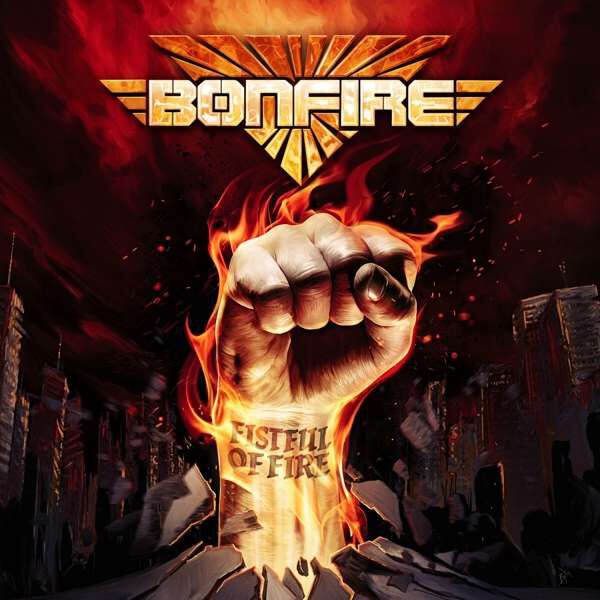 Since starting over around 2015 the German/American rockers of Bonfire have been pretty active. With their singer Alexx Stahl who joined in 2017 for the ‘Byte The Bullet’ album in quick succession ‘Temple Of Lies’ (2018) and the double album ‘Legends’ (2018, with only cover versions) followed and now there is ‘Fistful Of Fire’ where new skin beater Andre Hilgers makes his debut for the group that is being led by guitarist/composer/producer Hans Ziller. Further in the band are the flamboyant guitarist Frank Pane and American bass player Ronnie Parkes. ‘Fistful Of Fire’ is a fourteen song (including a few short instrumental intro’s and in the form of ,,Fire Etude’’ a short guitar intermezzo) logical step in the career of Bonfire. The band delivers a solid performance all around with lots of blistering guitar attacks and a healthy mix between solid melodic hard rockers and more arena rock anthems and a ballad is also on the menu, but that goes without saying (,,When An Old Man Cries’’ is one of the best songs and is also later featured in an acoustic version which is also gorgeous). I have always had a few doubts about Alexx Stahl. If someone could tell him in future to stop going over the top I am sure things will work out fine as he has settled quite nicely into the versatile Bonfire style. But there are moments in songs like ,,The Devil Made Me Do It’’ or ,,Gloryland’’ where Stahl just is too pitchy when he goes up a region or two. If you not really have the reach to go super high, just don’t do it. For the rest ‘Fistful Of Fire’ is a very good hard rock record with a strong sound, great guitar parts, plenty of cool riffs, lots of variety, some singalong moments (the title track for instance) as well as pure rockers where the band really let it rip. It is not that Bonfire is really trying something new or strange. These guys know exactly where their strength lies and what their audience wants of them and that is answered with ‘Fistful Of Fire’.