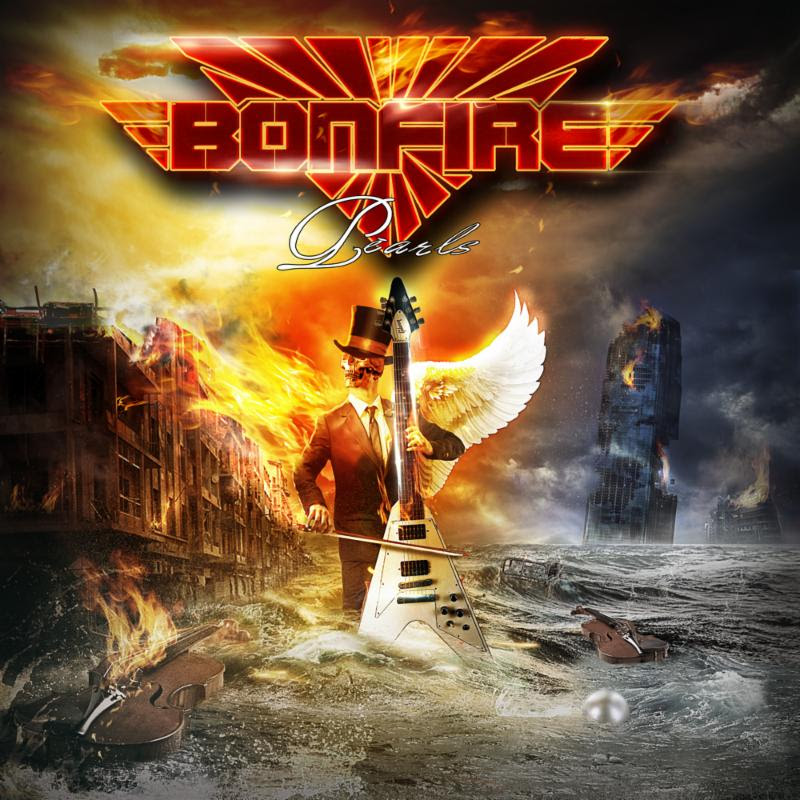 ‘Pearls’ is a Bonfire 2-CD celebration for being around for a cool thirty years! In fact it is a bit longer than that as guitarist Hans Ziller started the band Cacumen in 1982 and he might have continued with that name if their record company from that time (RCA) had not requested (demanded?) a name change to Bonfire in 1986. It has been a turbulent ride for the band. There were numerous changes in personnel and other situations like who has the rights to the name Bonfire, but since 2015 the line-up seemed to be stabilised with Ziller, guitarist Frank Pane, bass player Ronnie Parkes, drummer Tim Breideband and singer David Reece. With Reece behind the microphone the band released the more than decent album ‘Glorious’ in 2015 and now it is celebration time with the re-recording of 22 songs. Most of them are remakes, there is a cover of Lynyrd Skynyrd’s classic ,,Sweet Home Alabama’’ (this version is more upbeat and heavier than the original but in my view not great) and a song written by Ziller and Reece called ,,Let’s Fly Away’’. It is a bit strange to hear Bonfire perform without long term front man Clauss Lessmann (watch out for his new formation Phantom 5, CD coming out in a little while), but David Reece is without a doubt a more than capable replacement. For Reece it is the second time that he has made a move to a German band. You will surely remember him replacing ‘Der Udo’ in Accept in 1989 and releasing the album ‘Eat The Heat’. David did a good job then as he does now. ‘Pearls’ is split in a rock side and a classic side. The band has put a bunch of the old tracks through the blender, giving them a more modern hard rocking sound with blistering guitars including some new arrangements as well. It has done wonders for songs like ,,Sweet Obsession’’, ,,American Nights” and ,,Don’t Go Changing Me’’. Hey, they even looked back at the career of David Reece by including a great version of ,,Loaded Gun’’. David recorded this track in the nineties with the band Bangalore Choir on the album ‘On Target’. The ‘Classic Pearls’ side consist of nine melodic ballads that were such a big part of the old Bonfire days. ,,Give It A Try’’, ,,You Make Me Feel’’, ,,I Need You’’ (wow!) and ,,Who’s Foolin’ Who” have stood the test of time and sound freshly recorded quite excellent with great vocals parts indeed. I did not miss Claus Lessmann on these tracks at all. All in all this is a fitting celebration for being in the business for 30 years. Bonfire might not have another thirty years in them, but this release makes me look ahead to more new material to come. Jawohl!