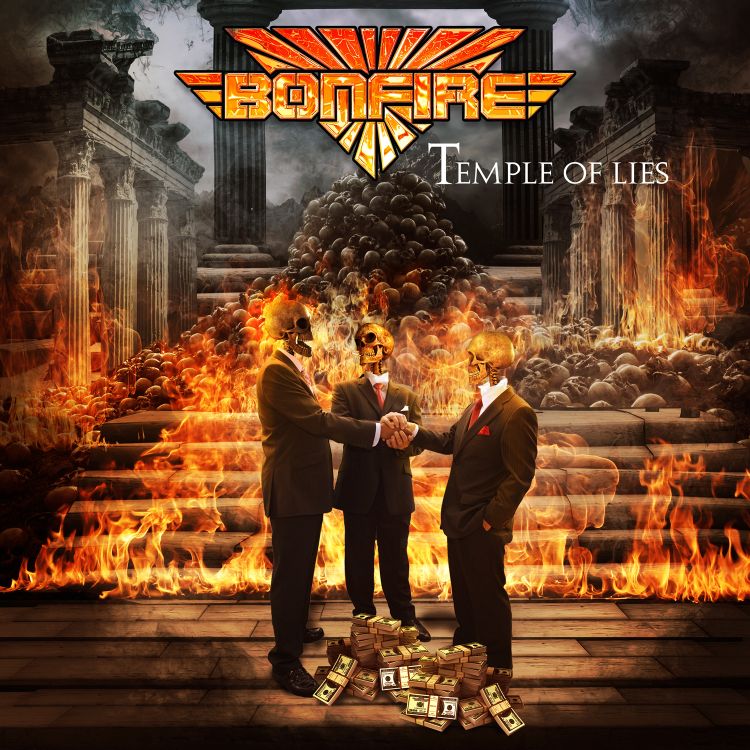 The German melodic power hard rock band Bonfire was founded by lead guitarist Hans Ziller way back in the year 1972. Since then Bonfire has released fourteen studio albums, the last one was called ‘Byte The Bullet’ (2017) and that one featured the new singer Alexx Stahl (ex-Purple Rising, ex-Roxxcalibur). The fifteenth studio album of Bonfire is called ‘Temple Of Lies’ and it is a great album reminding me of classic Bonfire albums like ‘Fireworks’ (1987) or ‘Point Blank’ (1989). The band has always been “famous” because of their very familiar musical trademarks, being: melodic hard rock tracks filled with captivating guitars, excellent rhythms, great vocal melodies and catchy choruses. All these musical characteristics can be heard on ‘Temple Of Lies’, as some of the songs on this new album are really awesome and belong to the best Bonfire tracks I have heard in a long time. Take, for example, a track like ,,On The Wings Of An Angel”, which is a classic Bonfire song, or the heavy title track, featuring excellent rough, high-pitched vocals and highly melodic guitar work. ,,Fly Away”, probably my favourite gem on the album, is extremely powerful and melodic AOR, played at the highest level and that one will surely become a classic Bonfire live staple. ‘Temple Of Lies’ is a by the book melodic hard rock album, with the exception of the too cheesy ballad ,,Comin’ Home”, which proves that Bonfire is still alive and very kicking; even after  being in the game for more than 45 years! If you buy the digipak edition of ‘Temple Of Lies’ you will get two bonus tracks, one being an extended acoustic version of the ballad ,,Comin’ Home” (rather boring, by the way) and a 20 minutes track called ,,Friedensreich 2, The Return Of The Zunsler Into The T.O.L.”, a rather weird, experimental sound collage which sounds like Frank Zappa….