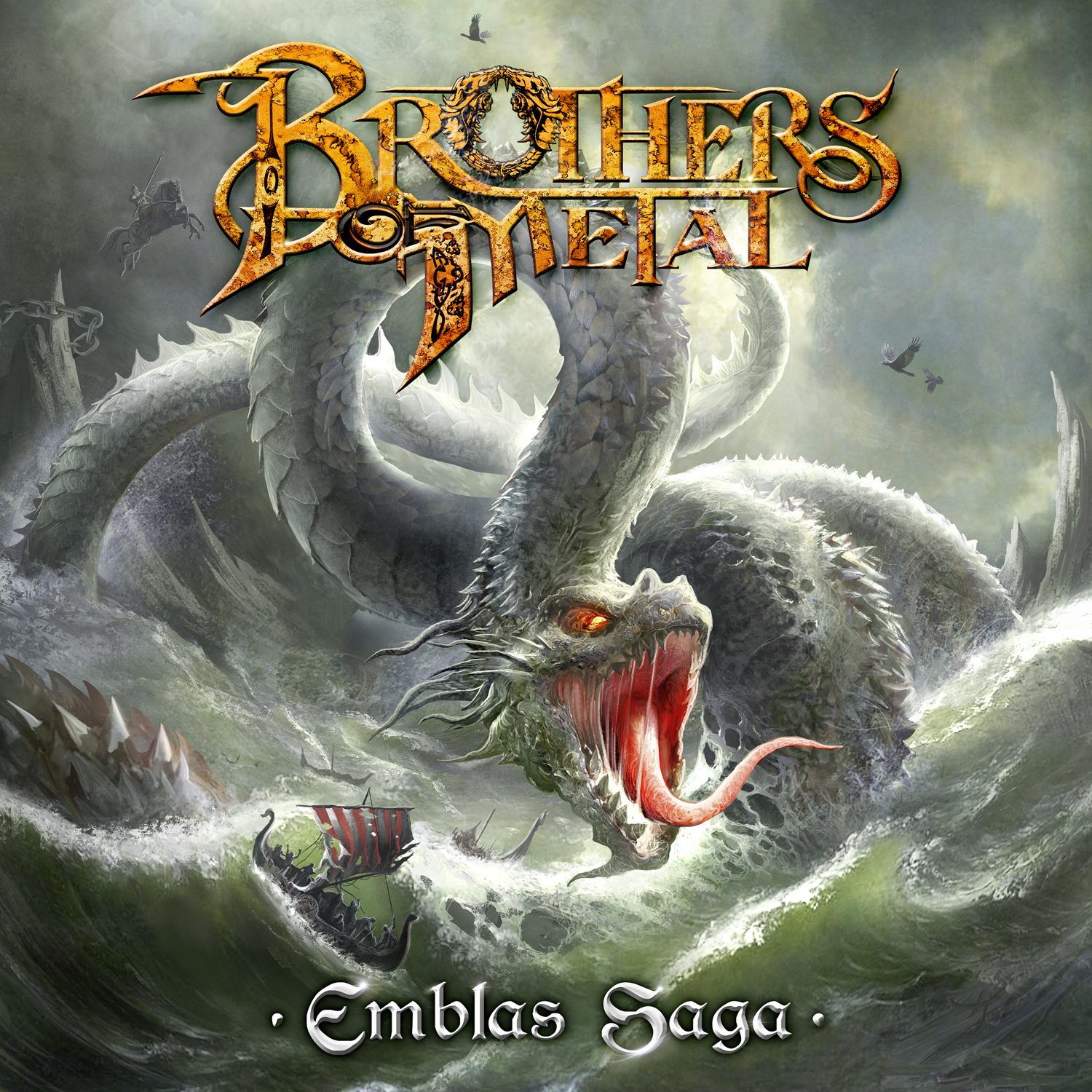 The first album’s re-release in 2019, instantly warped Brothers Of Metal to a fan favourite position as glory metal hopefuls. Their epic warrior metal is fused with Viking elements and outclasses many higher ranked acts on the spot. With the 3 piece vocal presentation of Joakim, Mats and Ylva, the band features a distinct and unique approach with an interesting vocal approach adding drama and power to their hymns. The fresh new edition of `Prophecy Of Ragnarök’ assured high rotation on YouTube and enabled the 8-piece metal outfit to sprout their creativity and seizing the moment.

`Emblas Saga’ further crystalizes their epic storytelling and transcends their debut. The songs have matured and the interaction between the vocalists gels more naturally than on the band’s debut. The first offering to make an impression, the 2nd album to grip the upward spiral certainly applies here. The new CD feature all key ingredients and delves deeper in the heroic realms of Northern mythology and its Viking sagas. Mystery and mythology find their way into the band’s symbolic lyrical content outplayed perfectly by the threesome on vocals. The crystal clear powerhouse vocals of Ylva Eriksson contrast deeply with the powerful chants and choruses laid down by Mats Nilsson and Joakim Eriksson’s loud howls and grunts. The contrast adds to the dynamics of the full frontal metal attack brought to you in your living room. Brothers Of Metal lay down a serious bodywork of driving thick triple axe attack riffs with exquisite solos, over a thunderous groove of blasting double beat drumming and sturdy pulling low bass Iines. From the heroic anthemic opening that leads into the earwax, yet predictable ,,Powersnake” all the way to the Celtic tinged folk hymn ,,To The Skies” the power is high and the urge is pulsating dominant. The diversity, if any in this genre, is making it enjoyable above many genre mates. On ,,One” the interaction is switching between narrative growls and grunts as well as Ylva’s towering loud vocals that carry the track. ,,Hel” and ,,Njord” are very scenic and cinematic with powerful double bass driving it forward. The ploughing madness is even more upbeat on ,,Chain Breaker” and the atmospheric and pompous ,,Theft Of The Hammer”. Personally I prefer the impressively crafted ,,Kaunaz Dagaz” with its Enya/Clannad-like opening suddenly bursting into very harmonious guitar melodies and drum salvos. The melody is thick layered and appealing with some Saxon elements from the ,,Crusader” era. It just feels magnificent and displays the bands variety and distinct qualities as composers. On ,,Weaver Of Fate” the band takes that Celtic folk element one step further into an almost elemental powerful semi ballad. If Bob Catley (Magnum) would have been singing this, it would have easily fit one of their classics even though it progresses in a much more metallic direction. Now rest assured, the ‘what if’ here fore mentioned only applies to the atmospheric and classic outpour of the track which is elevated by Ylva’s impressive vocal delivery. It is an angelic and heart-warming performance unlike topped by anyone else. It contrasts deeply with the powerful outcries of the rest of the album. The epic title track makes the vocal escapades collide on an entirely different level with constant interaction spitting the lyrics and joining into chants following the impressive sticky chorus. Turbulence is key and the song whelms with sonic perfection. It tells a story in words and music with imagery nesting on the spot. It is that cinematic elegance Brothers Of Metal have seen keenly embedded in their sonic pallet and which aligns perfect with their glorious choruses and chants. It is pitch perfect.

I won’t dissect `Emblas Saga’ like you might have grown used to from my side. It simply is an album with a captivating spirit and pulsating heartbeat that will reveal more of its power and musical dominance with every spin. Hell, this album is even appealing to fans not particularly fond of this subgenre. It has so much to offer.
It is a step up from the impressive debut and will hit you like Thor’s Hammer at the coming festivals!