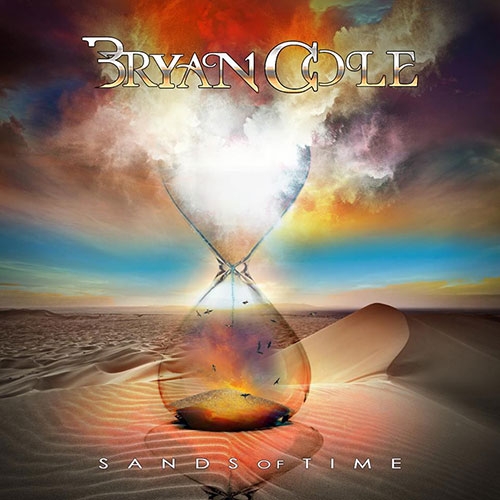 When Andrew McNeice of Melodic Rock Records first announced Bryan Cole I was rather prejudice as McNeice isn’t always as subjective when it comes to reviewing releases on his melodicrock.com website, nor with the launch of artists on his own label. The latter to be forgiven, the appraisal being a selling tool and the manager’s believe in the talents of his signing. Upon the first introduction however, I had to admit that McNeice didn’t come short in selling Bryan Cole’s debut album `Sands Of Time’. No, he was spot on with his statement that Cole is easily shared in the classic section amongst luminous names like Giant, Survivor and Pride Of Lions. A rather pretentious statement perhaps, but it hinds the league of musical perfection in which Cole operates. His debut `Sands Of Time’ is packed with slick melodic hardrock leaning towards AOR. Towering choruses and swirling keys, slick melodies and productional perfection. Bryan Cole is pushing the envelope of melodic rock without discarding the foundation on which the genre is built. Surrounding himself with songwriters to add a little poise to the plate, Cole managed to inflict the tunes with tremendous passion. His guitar playing foremost is simply jaw dropping and pitches to perfection. I’m not exaggerating when I state the man to be shredding in the same team as famed performers such as Michael Thompson, Tim Pierce and Mr. Lukather. His crisp and crystal clear scaling is simply magnificent. Exquisite toning and magnificent soloing adding up to the perfection of the songs, flown from the pens from AOR’s finest: Jim Peterik (Survivor, Ides Of March, Pride Of Lions), Johnny van Zant, Brett Walker, etc., etc. The opening ,,Burning With A Reason’’ instantly sets the standard with exceptionally played perfection. The throbbing bass provided by another great melodic rock musician, Mr. Mike Brignardello of Giant, fame is balanced out by the excellent fret board-magic of Bryan Cole. Screaming string bending and freakish fret board wizardry pull along the track in sheer harmony and with slick perfect. Cole’s voice is wide and soaring, hitting high at times but also oozing warmth needed to make it happen… and make it all work out as it does. The choirs are powerful and pompous underlined by a fine draped layer of keys. Brett Walker’s ,,Hard To find An Easy Way’’ immediately taps the vein of classic melodic rock with fine tuned harmonies and a nice edge on Cole’s voice that gives it enough bite to stand out. The guitars again are simply outstanding, as is the energetic drumming which propels the song. Picking highlights would be a gross injustice to the high quality of the material and versions of classic tunes gathered on this remarkable record. But if I have to pick a few, one of them will be the McClintock track ,,When Love Breaks’’ which simply is razor sharp and sparkling with panache. Cole at times emulates the grandeur of Mark Free and touches base with the heartfelt passion of Giant’s Dann Huff. The cocktail of greatness erupts also in Bryan’s renditions of the newer AOR classics from Peterik’s band Pride Of Lions. Cole’s versions are slightly fiercer leaning severely on the spit and fire of his guitar licks but doing justice to the originals. ,,The Courage To Love Somebody’’ is a perfect example of Cole spicing up the slick perfection of Peterik’s anthemic tracks. ,,What Kind Of Fool’’ also fires on all engines with Cole’s voice warm and introvert resonating off the edges. ,,Turn To Me’’ is more forward and powerful with a little progressive edge and fine tuned choirs over (again) brilliant guitar shreds. Funny enough the other picks as highlights of this album are the 2 songs Bryan co-wrote with his writing-partner DJ Gleeson; the pristine ballad ,,I’ll Be There For You’’ with it’s soaring heartfelt lyrics, and the ,,We Lost The Fire’’ which interlines perfectly with the grandeur of the masters who wrote most of the tracks on this debut. ,,We Lost The Fire’’ combines the Sambora BJ trademarks and interlaces it with the slick melodies of Peterik’s fine tuned feeling for drama. It’s fresh and modern but deeply rooted in the back catalogue of melodic rock. The album ends in sheer melodic mayhem. ,,Nothing Matters’’, from the pen of Soleil Moon’s songwriter and MTB vocalist Larry King, is simply jaw dropping. The song could have been on any late 80’s AOR gem, preferably the Signal debut or Alias’ classic. The song, as the entire album, oozes the grandeur of those days without lacking the punch of the present. The production of Doug Kasper is crystal clear and spot on, boosted by an overall top notch mastering from the hand of JK Northrup. `Sands Of Time’ is an album that will please a lot of fans of the genre and will ignite the sleepy tides we’re in. Bryan Cole is the rising star on the horizon and I’m already looking forward to his follow up… This being my number 1 pick of this year!