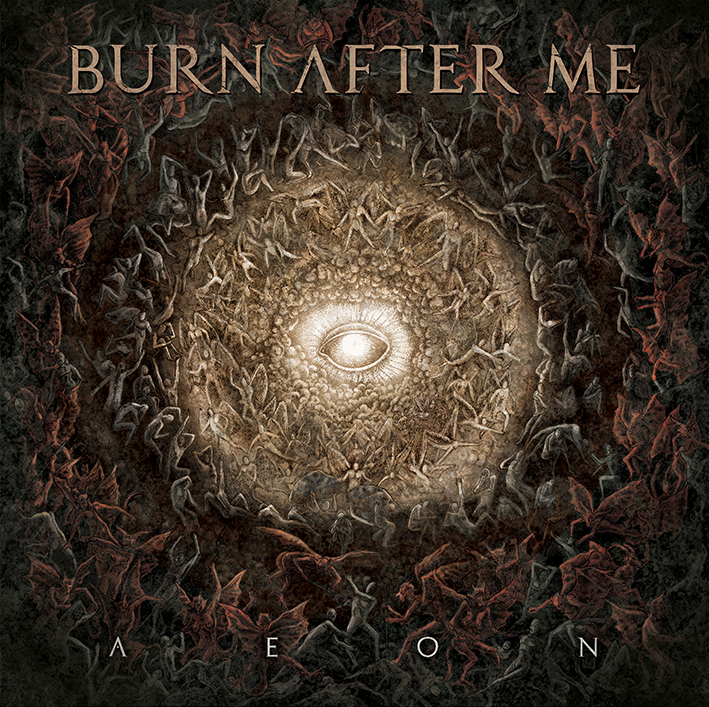 Progressive metal core band Burn After Me, based in Arona (Italy), is a relative young band that was formed somewhere back 2012 and so far known for their two (self released) EP’s `Healing My Wounds’ (2012) and `Ascent’ (2013). I haven’t heard these EP’s myself yet, but I can only imagine they were a good starting point of what this five-piece had up their sleeves for the future. `Aeon’ is the band’s first full-length debut and contains 12 brand new songs, based and inspired on La Divina Commedia by Dante Alighieri. The music and the way the songs are arranged show these musicians have talent and know how to challenge an audience. The album releases a big, aggressive and masculine sound and especially the first 3 songs ,,Cocytus’’ (after a short atmospheric introduction) ,,Chasm’’ and ,,Phlegethon’’ are like a hurricane force in which the grunts, growls and screams of Roberto Frigo seem to come from a very deep and dark inner abyss. Yeah, sure it is almost impossible to understand the lyrical message with this style of singing but the performance of Roberto is definitely convincing, diverse, emotional and one with the music. With fourth track ,,Lustful’’ the band exposures more melodic aspects and keeps that flow for the rest of the album. Here and there even normal vocal lines pop up. So what makes `Aeon’ intriguing and worth listening to? It is the way these guys weave the aggressive approach with the melodic sweetness, the smart complexity and a slightly symphonic touch in the background. The cool guitar melodies and guitar solos are delightful and give the songs the extra sparkle. The songs are driven by complex and blast beat rhythms but there is also groove and steady power in the drum foundation. Burn After Me even experiments with almost fusion like passages in for instance ,,Head Bowned’’ and ,,Fixed Stars’’. `Aeon’ contains raw and fiery energy (but arranged in a mature way) that you need to absorb for instance after a stressful week. If you are fond of bands like Bury Tomorrow and Gojira, you should give these guys a chance.