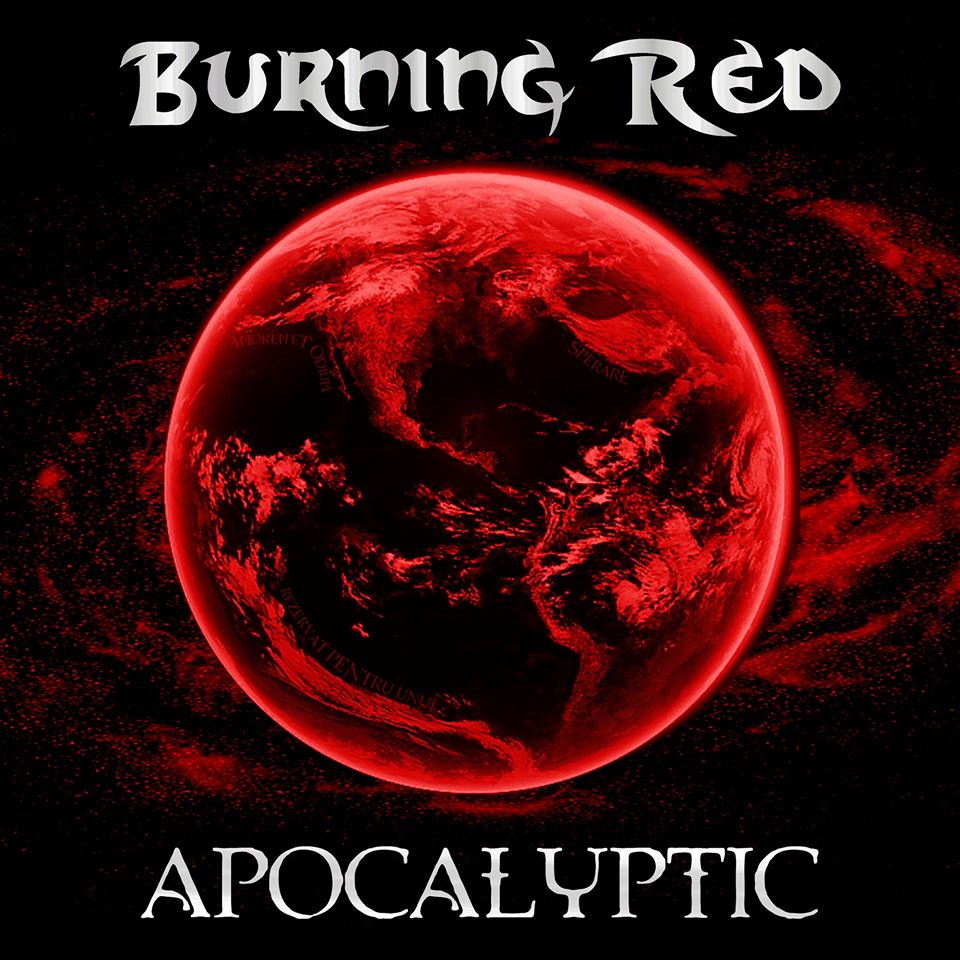 Many will disagree and surely there’s a lot of musicians that will differ opinions about the current state of rock and metal with companies unwilling to invest in acts and releases and television shows launching careers of one hit wonders rather than have artists developing a career, but on the other hand independent acts surface by the dozens now and reignite the good old days sprouting interesting music. With technology increasingly working in their favor and the World Wide Web serving as a portal to showcase their talents globally, the scene opens to wide varied possibilities.

Strolling the web I frequently come across talented acts which would likely have never caught my attention in the demo era being separated by oceans and traveling. One of the new discoveries strolling YouTube is California based trio Burning Red who recently released their debut ‘Apocalyptic’, which should (in my opinion) generate enough interest to warp their career into orbit. Burning Red’s ‘Apocalyptic’ is an album with intense swing and variety, and captivating musical craftsmanship.

Burning Red is a brand new band consisting of the talented siblings Michael (guitars/vocals) and Denise (bass) Gavrizescu and powerhouse stick swinger Jason Kaplan (drums). The trio recently cooked up an album packing tremendous power featuring the best of classic hardrock enhanced with the most enduring ingredients of the last 3 decades, spicing up their sound.

Right off the bat the band shoots into gear with the energetic ,,Cards On The Table” displaying their intrinsic emotive take on music and driven melodic rock. Michael’s playing is pitch perfect and his vocals pack power and diversity displaying an echoing glimpse of Caputo’s typical rings. He switches registers throughout the song and even more as the album evolves. The band’s engaging sound crystalizes further with the following ,,Don’t Let Go” that reveals interesting vocal interaction with enchanting and fascinating vocal harmonies. When the song slows down in pace with a gloomy sub note to build tension, Burning Red shoots into gear with even more panache and the time changes in drumming add to the explosiveness of the potion. The band swings high with Mindfunk’s distinct crossover sound coming to mind. Funky elements that are even more dominant on the powerhouse track ,,Down To The Ground”. The ‘uhhhs’ and ‘aahs’ are adding to the arena rock appeal of the track without falling short or displaying too much predictability. It is spot on. Burning Red manages to make the chants add posture rather than slickness, but on the other hand fuse the sound with insane power and recognizability in the process. Its groove is tremendous, reminiscent to Five Finger Deathpunch, especially midway when Kaplan and Gravizescu delve into jam packed progressive action with scattering sonic interaction. The song repetitively combusts with power with power and rides on momentum of its vocals, almost as warcries calling out for action to be enhanced. Performed live it will entice the audience and call out for serious fist pumping and air beating. Tapping from an entirely different barrel the title track comes barging in full frontal with anger laden vocals and a chorus with triple layered vocals added by Denise. It has a ring of King’s X specific choral vocals without  touching base with their typical elements, making it unique and stand alone. The groove is power packed, the raucous guitars in stop’ motion antics and frequently the song shoots into gear. Last Crack on Mordred acid, with Mindfunk groove ’n funk and vocals cutting through the melody instead of following the typical time marks. Kaplan ensures the backbone of the band is solid and adds insane progressive dynamics switching between double base and floors in drumrolls. Denise plucks her bass pasting the sound solid and injects the solid rhythm with bass riffs and funky solos. The overal sound is airtight and vacuum sealed with muscular persistent power laid upon us. Intense riffs and echoing solos with Hendrix-like string bending top it off raising the bar for the following ,,Take Control”, which is entirely different but packing the same intensity. The song is a semi ballad brimming with powerful bursts of emotion and timid instrumentation in its refrains. The song displays the variety and diversity of the bands capability with Michael’s vocal gymnastics revealing extravagant skills. It just gels perfectly and the chorus is instantly nesting, touching between classic power ballads and modern hard hitting emotion rockers. The searing solo is perfectly adding to the lustre of the track and the song keeps growing on you with every minute and every spin. The emotional outburst is towering and swirls towards the power packed end of the track. Opening with a punky riff ,,History” remains bending the boundaries of their sound, fusing Green Day riff-grit with huge melodic, arena-ready, choruses with exquisite vocal interaction and dense layered melodies. The track started out as the oddity of the album, but with its captivating energy and insane musicianship it kept growing on me. The groove and riff interaction is tremendous and Michael’s solo is entirely different in toning, morphing with the sound of the track evolving. Shooting up and down the ladder with piercing fretboard magic he injects a more metallic shreds allure over the melodic driven tune. ,,Thrown Away” packs the same ingredients but now crafted over more typical Green Day specific melodies, without straying from the band’s original approach and 70’s anchored groovy undertone. Burning Red manages to make all styles gel perfectly and blend it without force. ,,Hope” breaks the speed of the album and is a wonderful passion oozing ballad with appealing vocals. The lyrics are engaging and the track’s chorus is long stretched but nesting. For some reason Queensrÿche comes to mind due to the sophisticated execution, and when the dives into the swirling solo, Denise’s vocals add more intensity to the track. It is a powerhouse ballad with insane appeal. Running 4:23 the song is over before it even started and will have you searching for the repeat button. It is structured without following the genres golden rules for ballad-crafting, redesigning songwriting with keen musicianship and lyrical marksmanship fluently gelling in long stretching waves of melody. ,,The Holiday” opens with the band’s specific grooves and keys add to the powerful entrance. Funky bass fills make it swing with funk and the melody and chorus are captivating slick without lacking combustion.

‘Apocalyptic’ will appeal to many and certainly is one of the most impressive debuts of 2019. The sonic cocktail brewed up by the California trio is an audacious diversity of styles into their very own unique sound. You get a history lesson enjoying hard rocking styles and in the same moment you get presented and enthusing band bearing all the marks of greatness. Not only because this album is spot on, it also has you immediately trying to map out Burning Red’s next steps. And these might be as unpredictable as the album… This album is a must hear!