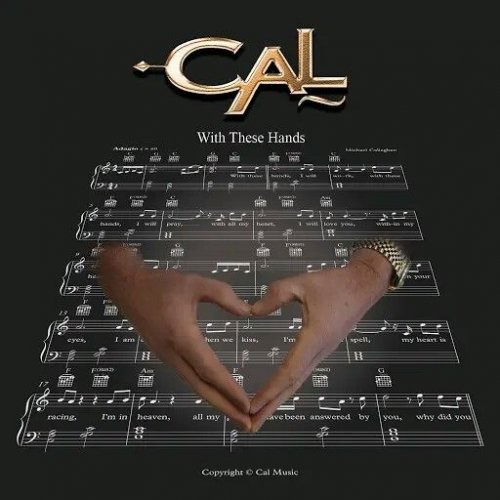 I understand musicians who are not aligning with the policies of platforms such as Spotify, especially with funds generated upon play, but there’s also an upside to these streaming services. You frequently get genre-like acts proposed based on your personal playlist and interests. Though most bear reminiscence due to selections based on common algorithms, the occasional surprise can be pleasant with new releases. One of these surprises is Scottish band Cal with their album `With These Hands’. Blending AOR and melodic rock with their Scottish roots, the band brews up an interesting album appealing to a wide and varied audience. Celtic roots shine through on this pleasant release, with Cal balancing in between the classic Big Country releases and melodic rock’s better eighties albums hailing from the UK. ,,100 Billion” is an excellent example of their abilities, and vocalist/guitarist Michael ‘Cal’ Callaghan sings in line with Adamson and The Alarm’s Mike Peters. It adds to the recognizable style. ,,This Is My Dance” and ,,Slip Away” open with later era Dare poise, to flower in the best Scottish tradition. The latter bearing reminiscence to Darren Wharton’s style song writing in general, but moving in a poppier direction on the chorus. Fluent guitar melodies and throbbing bass pull the songs forward, and the occasional traditional bagpipes and whistles add to the experience without ever falling short. Solos are top notch, melodic and tasteful. It all fits and adds to the joy of the listener. Absolutely impressive melodic anthems are the wonderful ,,Shipwrecked In The City”, ,,If It Is To Be”, and the atmospheric floating ,,The West Wind”, and the acoustic title track. It’s all very well arranged, breathing with passion for the AOR genre and Celtic music. With Callaghan being a gifted songwriter and singer, there’s no lesser track to be spotted, only the pace is rather low. Half of the album consists of (semi) ballads and acoustic outlined tunes. All adding to the atmosphere and sincerity of the album, but perhaps a little to low for many.

Cal’s `With These Hands’ is a tasteful album enjoyed during those long and endless summer days spend in the backyard. Fans of Westcoast AOR, and in particular Dare, should definitely grab a hold of this disc. All other rock fans should at least give it a couple of spins and enjoy. Nice….