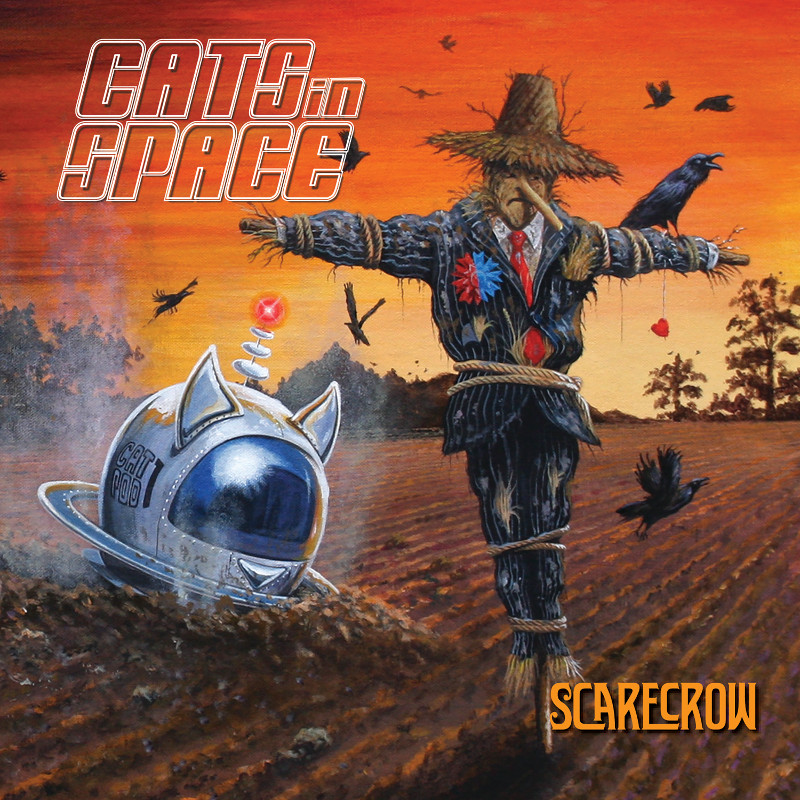 About two years ago UK based outfit Cats In Space really surprised the rock world with their first CD ‘Too Many Gods’. The band around singer Paul Manzi, guitarist Greg Hart, drummer Steevi Bacon, keyboardist Andy Stewart, bassist Jeff Brown and second guitarist Dean Howard produced a mixture of styles. Rock, pop, symphonic rock, progressive rock and even a bit of metal was combined in one fluent style. It was described as ’power pop’, but power rock would have fitted better in my opinion because that is just what these six dudes have delivered on their freshly recorded second opus. If you listen to the song ,,Broken Wing’’ on this ‘Scarecrow’ CD you basically get in one song all the ingredients that Cats In Space have to offer. Close harmony singing, heavy guitars and surprising arrangements go hand in hand with progressive and symphonic influences, all coming together in this blistering song. I must be mistaken but I have the impression that these guys have listened well to a bunch of old Queen recordings where Freddy Mercury experimented with vocal layers and choirs. ‘Scarecrow’ is a record for people who like some variety on their musical menu. Take for instance ,,Felix & The Golden Sun’’, yes, that is an experimental power pop track perhaps, but utterly brilliant as is ,,Two Fifty Nine’’. Cats In Space is a band that honours the old styles rock and prog rock but has managed to translate that into the current times when you look at the sparkling production that is one of the strong points of this album. This group just likes to mix it up and yes, it might take some time getting used to their musical escapades, but just as ‘Too Many Gods’ the ‘Scarecrow’ CD is very enjoyable and filled with quality music expeditiously executed by musicians who honour tradition and have the balls to do things a bit different. Too complicated and farfetched? Take a chance and try to get your head around these musical risk takers. There are far too many bands already who are just playing it safe, Cats In Space are exactly the opposite!!! They stretch it out, they try to innovate without losing their influences out of sight. A crafted and daring release!