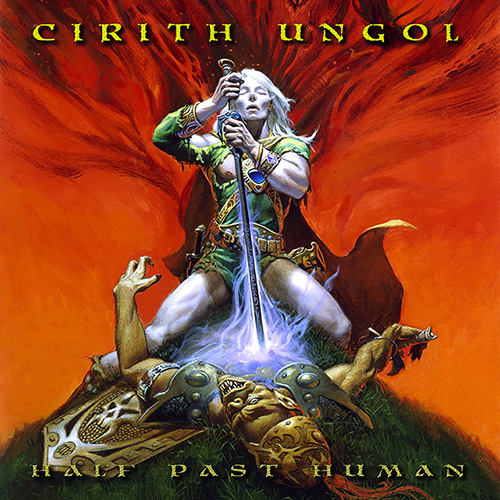 After almost three decades Ventura rockers and metal merchants Cirith Ungol released a new studio album in the form of ‘Forever Black’. Old times of unrelentless heavy metal complete with the scorching vocals of Tim Baker came back to life again. As also Cirith Ungol saw their activities on stage banned because of Covid-19 Baker, drummer Robert Garven, bass man Jarvis Leatherby and the guitar duo Greg Lindstrom and Jim Barraza decided to do something special. They dived into their musical archives to find the skeletons of a bunch of songs that were not featured on any of their old albums. The four songs they found were re-arranged, dusted of and recorded for the world to hear with Armand John Anthony at the production helm. ,,Route 666’’, ,,Shelob’s Lair’’, ,,Brutish Manchild’’ and the title track ,,Half Past Human’’ have been given the proper Cirith Ungol treatment: loud, hard, without any compromise and Tim Baker as usual torturing your ear drums with that one in a million voice.

Love it or hate it, the four songs that clock some 21 minutes all together would have fitted nicely on ‘Forever Black’. They have every trademark that defines Cirith Ungol. No idea why the price of the record with only four songs is that of a full-length record, so take that into consideration, as you should also take into consideration that only 5000 copies of this limited-edition EP were printed. But I bet a few dollars that if it would sell out a reprint would be definitely on the cards. Maybe only suited for the die-hard Cirith Ungol fans but as I am one of those I am happy with my copy of ‘Half Past Human’.