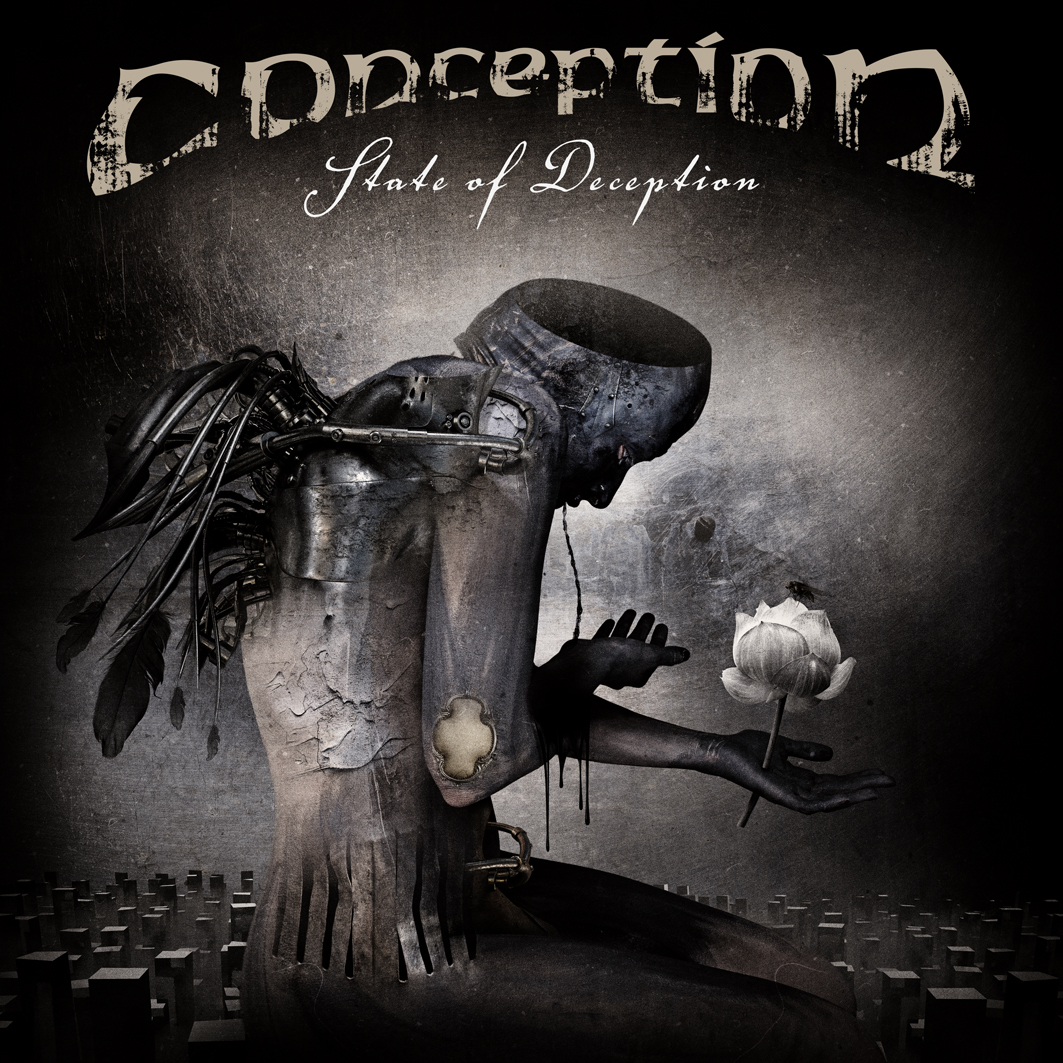 One rehearsal video it took to positively shock the metal community. The video of Norway based Conception’s reunion went viral and new music instantly became inevitable. The reunion of Tore Østby, Ingmar Amlien and Are Heimdal with their former lead singer Roy Khan snowballed downhill with F1 speed and the following crowd-funding campaign ignited the spark of inspiration with so many demanding the album. And by all means; the unfinished business of the band definitely was in desperate need of a follow up chapter to their acclaimed releases, and short-lived reunion. Being one of metal’s hopefuls of the nineties, the story abruptly ended upon Khan joining Kamelot for their chart busting successes story. `The Last Sunset’ (’93), `Parallel Minds’ (’93!), `In Your Multitude’ (’95) and the masterpiece `Flow’ (’97) not only displayed spawning creativity, it also made fans aware of the innovative craft of the band, laying down the groundwork for bands like Opeth.

`State Of Deception’ follows the release of the EP `My Dark Symphony’ (’18) and picks up where they left off with `Flow’ rather than the EP. As a fan of Conception in the past and Kamelot in their debuting days, I was also psyched by the reunion. Though Khan gained towering fame as vocalist of the Florida epic metallers, I also saw the man struggle with pressure before his burn out leading to his departure. Foremost however, I always felt he was out of place with the Kamelot’s demanding need for much wider range.
The new album features 9 tracks much in the vein of their debuting days, without lacking a stubborn thrive to grow and explore. The musical direction is as unpredictable as it is expected and the content of music and lyrics also falls amidst the state of deception following all struggles the band endured. From the band’s implosion and Khan’s battles as well as the struggles while creating the record with Pledge Music’s much published bankruptcy casting a shadow on the reunion and release. It all casted a shadow over the band’s work and affected the album. Fighting harder and working with more determination than ever before, this is definitely the album we expected. It is packed with rich textured progressive metal. Opening with the sinister ,,In Deception” with its blooming orchestration, the mood is instantly set. The entrance of ,,Of Raven And Pigs” immediately injects the polyrhythmic discomfort that grows on you. Khan’s echoing vocals at times remind me of Vanden Plas’ Andy Kuntz with his nasal tone and moaning growl. It becomes instantly clear Khan is at home and the centre of the action amidst Østby’s jazz infused patterns. The song is crafted around an intense and endless repetitive riff and drum loop that is overruled by the uproar of a revolution. Distorted vocals with hypnotizing welling emotion kick ,,Waywardly Broken” into gear. Khan displays his skills with a charismatic eluding vocal melody over a biting guitar hook that unloads with impressive chorus and load guitars. More metallic they plough through the riff driven (Ark-ish) ,,No Rewind” that packs an insane polyrhythmic drum pattern with Heimdahl going all in, switching between Portnoy and Bozzio as if it causes him no sweat whatsoever. The piercing solo is fingerpicking brilliant, though short. Østby however is very present with his intrinsic and staccato playing. ,,The Mansion” is an ominous piano ballad that flowers with intensity and great uplifting chorus that underline Roy’s impressive charismatic voice. ,,The Blues”; Metallers playing the blues? Yes indeed! With the riff progressing as a blues chord, the song itself packs tremendous jazz power and progressive elements unloading during the soul of the chorus. An insanely well crafted song that floats on the tidal wave of Khan’s harmony vocals. Going in more experimental with ,,Anybody Out There” Conception draws from Pink Floyd’s darkest symphonic scales without lacking ominous overhaul that nests deep in your head. The melody of the chorus is striking and infectious and rolls forward with a slow doom note. My absolute favourites are saved; the tentative urging ,,She Dragon” with its enormous riffs and wonderful melodies, and the wonderful ,,Feather Moves”. The first features Khan’s most captivating performances as where the last is one of the most jazzy infused tunes ever recorded by the band. ,,She Dragon” bears the trademark of all Conception and Ark records with extravagant music interaction and tons of breaks. Held together by an infectious melody and captivating vocal performance the songs instantly nests. The song opens slowly and Amlien reveals his exquisite skills with an impelling bass line over the vivid drum shuffles and ebbing guitar licks. The songs starts to evolve slowly and only breaks from its pattern midway with a powerful string arrangement. The solo is jazzy and deeply rooted in 70s classic prog.

`State Of Deception’ is likely Conception’s best record to date. It packs all the bands stubbornness and key ingredients without lacking their explorational spirit and genre defining drive. The jazzy patterns are dominant as are the typical progressive metal elements and hooks. Much like Psychotic Waltz they keep pushing their boundaries and their progression aligns with their typical band sound. Not repetitive, never a dull moment. Conception is back and fires on all cylinders. Damn…. 2020 starts like a bliss!