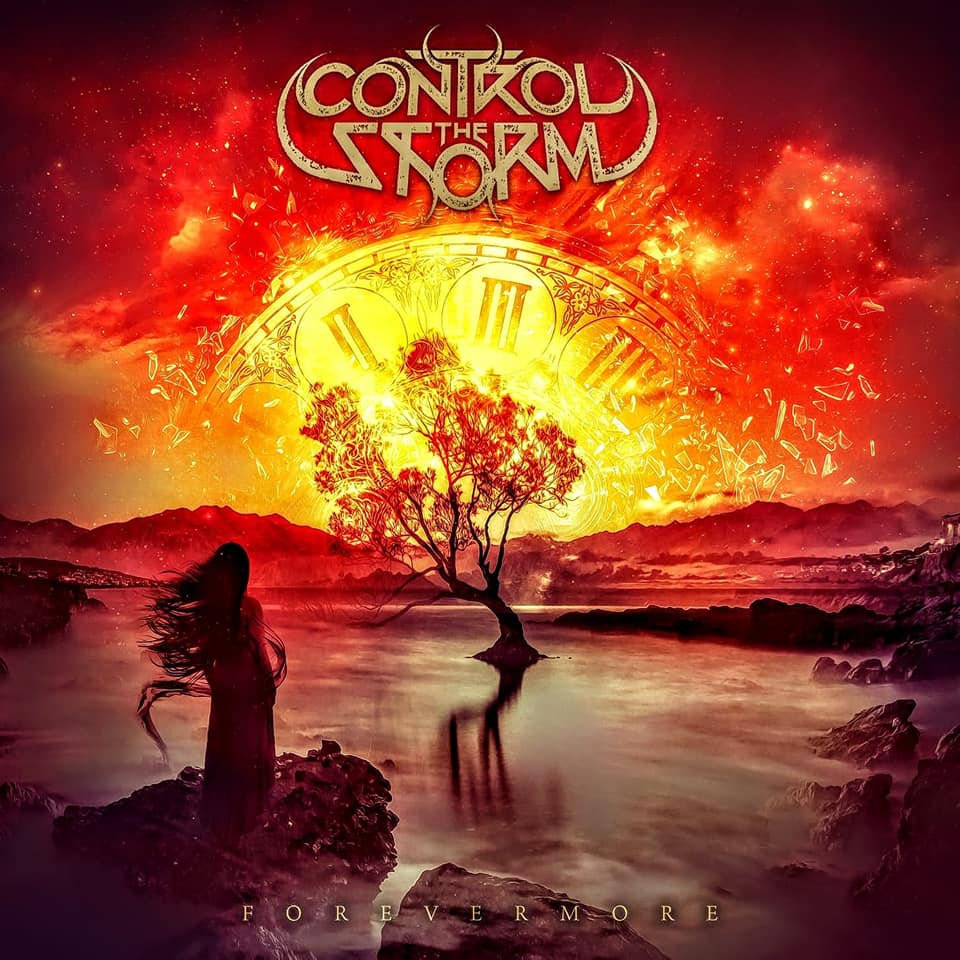 From Bristol in the UK hails epic power metal band Control The Storm, who deliver their second album following their debut `Beast Inside’ in 2015. As I dive into their new record I have to recoup on their debut and it instantly made clear why they stuck below my radar: the songs missed the appeal to uplift them from the many other acts in the female dominated genre. `Forevermore’ is their second attempt in winning over, and a recent performance at the raved Bloodstock festival put them on the map more firmly already.

It is impressive to hear how fluent the band lines up the pompous symphonic arrangements and injects them with propelling thrust. Ilyan Vasilev’s double bass kicks fire with whooping pace without losing the slick appeal of the track. The speed spit is reminiscent to black metal’s most persistent blast beats recorded, yet Control The Storm maintain their melodic glance over all this explosive force. Clearly the band is a seasoned metal band operating in fine form, leaping away from their debut album. The band has grown musically and cemented into a slick operating power band. Melodic and slick the songs evolve with insane hooks and recognizable nesting choruses. Riffs are delivered in large chops and the solos are simply excellent. It all lines up perfectly for vocalist Firouzeh to pitch her vocals over. Her crystal clear voice is impressively powerful and that power and appeal compensates the lack of a defining raw edge. She switches registers continuously and does it with impressive thrive and gut. Guitar tandem Rich Shillitoe – Matt Smith interact on high level with fierce riffs and dropping solos and melodies. The way they storm forward on the enormous ,,Strike To Defend” is insane. Progressive melodies switched with progressive hooks and riffs, sculpturing the track towards a melodic overhaul. Paul O’Shea keeps a low profile unlike keyboard player Raedon Mac who intensifies the performance injecting pompous power and towering arrangements. Yes, we have heard it all before, but once delivered with such fine tuned feeling for drama, it elevates a band from mediocrity. Frequently they balance on the fine line of overdoing it, much like Queen, who also comes to mind from time to time. Fusing pompous power with intense drama, the intro instantly raises the bar with the wonderfully composed ,,Darkest Fantasy”, packing insane wallop. Absolutely brilliant is the wondrous orchestrated ,,New Era”, drawing from Iced Earth’s withering allure and the glimmering Evergrey edge enrolling a melancholic serenity erupting with magnifying keyboard swirls and prog drum patterns. The song maintains is melancholic and melodic appeal though it rolls forward with the gearshift used constantly. Towering in its chorus the song has Firouzeh pitching high and displaying her impressive vocal chords. Spot on she pitches up with poppy appeal delving deep and displaying a nice echoing edge. In the meantime the song switches its drama while double bass drums push it forward with great intensity. Intense is the mournful piano ballad ,,In The Night” which is simply wonderful and reveals more of Firouzeh’s marksmanship. We hear an emotional tear as well as impressive power taking the song into a more powerful direction. Sincere emotions well while the sniff and tear ebb.

Switching to more melodic epic metal the song spits fire with the German toned ,,Follow Me” and the blast beat driven ,,Hidden Wonder”, with its Celtic elements and enchanting refrains. Another stake is the propelling gallop of the dense ,,Chaotic Mind” with its screaming guitar pitches and tremendous drive. An ominous and taunting outline is paving the way for the lustre packing ,,Curse Of The Voiceless” which unravels like a traditional power metal track before Firouzeh steps up to inject it with her superb vocals, the starting point for the band to morph the track into an epic tune with outstanding dark grunts packing the doom. The band’s magnum opus is the 13-minute title track, which whales with Celtic signatures and instrumentation (bagpipes). The song has a strong cinematic scope with wonderful arrangements enrolling it with majestic force. Imagery is instantly driven into your head with the song breathing fire. Chants and drum rolls enhance the song’s appeal, all pitched into form by the amazing vocals. It all adds up…

,,Forevermore’’ concludes the album with force majeure. Control The Storm have definitely outdone themselves on this second album and leaped to the higher ranks of cinematic epic power metal.  With Firouzeh as their charismatic frontier the band has a gem at their disposal able to uplift tracks to a higher rate. Even though the comfortable dramatic pitched range might chase off the grumps, it is the sheer quality of the performance hauling new fans in. `Forevermore’ packs insane quality and is likely one of the finer records of the genre. I’m convinced it will attract a wider array of listeners than most epic and gothic tinging releases, because of its honest thrive and metallic power. Check it out!