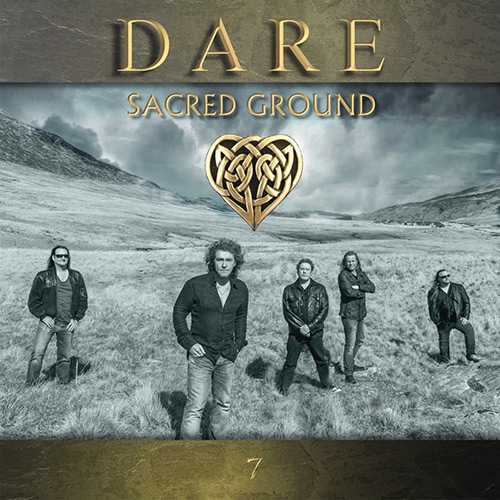 Dare has been around since 1985 with Darren Wharton as the main man. They started out as a band but after the first two albums the line-up fell apart and Darren kept Dare alive working from his own studio, based in his house in Wales, using some friends like Richard Dews. Furthermore he released the CD’s on his own label Legend and finding only a company to distribute the albums like for instance the German label MTM that does not exist anymore. The heavy rock sound from the first two albums changed into melodic AOR with a lot of Irish influences in the music that was carried by the warm voice of Darren. He has certainly not produced a lot of records during 30 years of Dare, but they were always good. In 2012 he came up with ‘Calm Before The Storm 2’ and in 2009 there was ‘Arc Of The Dawn’. Some time ago Darren reunited with original Dare guitarist Vinny Burns and bass player Nigel Clutterbuck. But there is no going back to the beginning. ‘Sacred Ground’ is yet again a very polished sounding melodic AOR record. The big difference is that Vinny Burns has managed to beef the sound up a bit with his playing, a thing that works very well for ‘Sacred Ground’. I have always loved this band and this CD just makes me even love them more. Okay, some songs are a bit of the soft side perhaps, but there is always Darren’s warm voice, Burns’ spicy guitar bits and off course those Irish influences in a song like ,,Until’’ that make it all worth it. If you are familiar with earlier work like ‘Belief’, ‘Calm Before The Storm’ and the two above mentioned CD’s ‘Sacred Ground’ will not come as a surprise, because to be honest, it is more of the same. But if you do it with the integrity and the class that Dare is showing on ‘Sacred Ground’, that should not be a problem. Yet again there is a guest role for Darren’s son Paris Wharton who plays lead guitar on ,,Along The Heather’’, in my opinion the best song of the album.