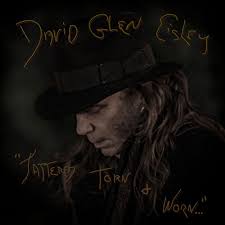 Vocalist David Glen Eisley mainly gained his reputation with the bands Giuffria and Dirty White Boy. The man has a very distinctive and above all recognisable sound, which makes him stand out from many others. But although Eisley is a master of his trade he is only known by the happy few, even after Giuffria and Dirty White Boy. In 2017 he more or less re-emerged recording an album with guitarist Craig Goldy entitled ‘Blood, Guts And Games’ and Eisley also featured on the Bob Kulick album ‘Skeletons In The Closet’. With those involvements Eisley ended his self-chosen retirement but it was Craig Goldy who was the key factor encouraging Eisley to get his act together and return to what he does best: singing. Those activities with Goldy [and Kulick] must have given David Glen Eisley inspiration because at the age of 66 here he is with his 4th solo-album with the help of drummer Ron Wikso, bass player G.D. Tubbs and guitarist and producer Paul Clem Calder. Style wise ‘Tattered Torn & Worn’ does not supply any real surprises. Eisley has always been a solid rocker on his solo material and this album offers more of that. With his trademark voice as leading beacon this album features 13 solid rockers, some up-tempo, some more laid back, a very melodic acoustic track [,,Red Raven Blue’’] but overall powerful and nicely accessible. Especially the first four songs of the album bring back that good old fashioned eighties rock feeling where David Glen Eisley sings in a comfortable yet intense manner being escorted by a very capable band. The music just sounds good with the emphasis on solid performances and ditto sound. It is not that ‘Tattered Torn & Worn’ explores any new avenues for David Glen Eisley but the overall quality is more than good enough to convince the listener that David Glen Eisley has not lost his singing touch at all and that he is back. Maybe not with a vengeance or a feeling that he has anything to prove, but for himself this record must be the satisfying result of a journey that he started again when Craig Goldy called him out and told him to shift his ass into gear. Not as slick as Giuffria in their day or as bold as Dirty White Boy perhaps but somewhere in between those groups is where David Glen Eisley has found his current corner with ‘Tattered Torn & Worn’.