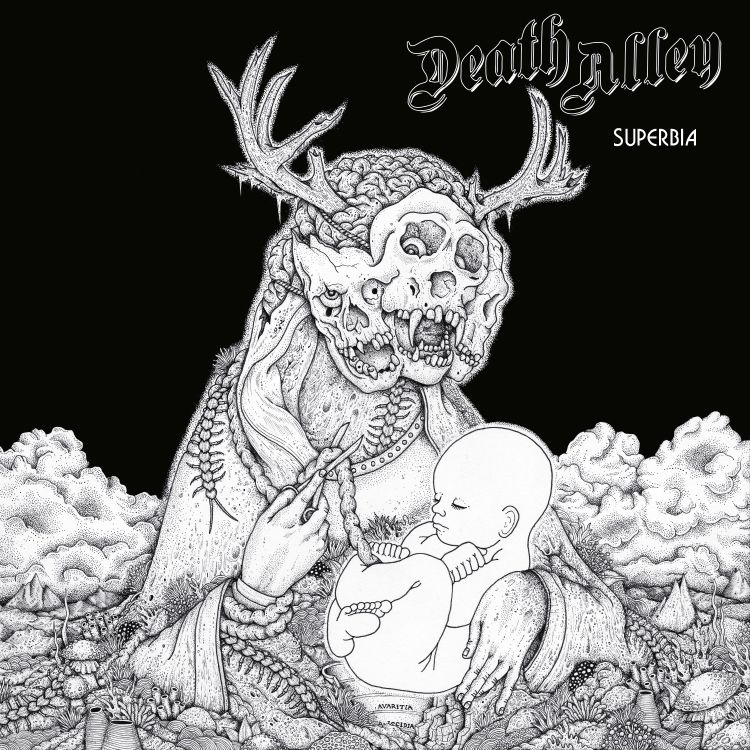 With their first full album ‘Black Magic Boogieland’ Dutch outfit Death Alley made quite an impression. Now almost three years later and with a new rhythm section (Sander Bus on bass and the Swede Uno Bruiniusson on drums) the band around singer Douwe Truijens and guitarist Oeds Beydals have slightly changed their musical approach and are on some tracks like ,,Pilgrim’’ for instance flirting with progressive rock, giving the music a different flavour. Also the very solid production by Pieter Kloos (Motorpsycho/DOOL) has put an extra dimension on the music, the band sounds powerful and more dynamic as a whole. A song like ,,Feeding The Lions’’ with its intensive groove has more melody in the vocal approach than you might have expected from Douwe Truijens, who as singer has surely been developing himself. But the songs that sum up Death Alley these days are the long pieces ,,Daemon’’ (9 minutes) and ,,The Sewage’’(almost 12 minutes). Here the psychedelic and spacy influences from a band like King Crimson are truly displayed combined with other ingredients like melody and heaviness. Death Alley is not just an everyday rock band. The four lads try to avoid the conventional path and choose to sound a bit different. Truijens has a certain desperateness in his voice while the rumbling bass of Bus in a track like ,,Daemon’’ gives the music something extra. Coming from a bit of a hardcore and punk background Death Alley has gone through a big development of which ‘Superbia’ is the first result. Not a record that is easy to grasp at first sight, it needs time to grow on you and it demands an open mind from the listener, but a higher intensity, groove and a big jump forward in song and production quality are ingredients that the band has added. Still, somethings tells me that Death Alley is still developing naturally and these guys will be around for a while yet, so it will be interesting to hear (and see) what the musical future of this band holds in store. But in the meantime ‘Superbia’ should not be ignored.