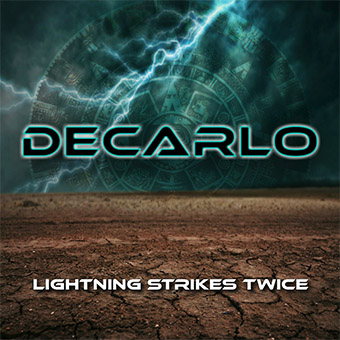 Singer Tommy DeCarlo has been singing with Boston since 2007 filling in for Brad Delp who so unfortunately for the rock world took his own life in March of that year. Boston is of course a legend among the rock bands but the truth is that the group around Tom Scholz has not done much the last decade. Yes, they played live but hardly any new material has surfaced. In 2013 they released ‘Life, Love & Hope, a rather disappointing piece of work. Tommy DeCarlo has also his own band with his son Tommy Jr. on guitar, drummer Dan Hitz and bass player Brett Nelson, operating from their hometown Charlotte. As far as I know ‘Lightning Strikes Twice’ is the first studio outing of DeCarlo with his own band and the question is of course if his time in Boston has rubbed off on this record. You can hear some ‘far’ influences in the song ,,You Are The Fire’’ (in the chorus of the song) and that famous organ sound of Boston every now and then pipes up but it is safe to say that on the twelve songs that have been recorded for ‘Lightning Strikes Twice’ Tommy and his fellow musicians try to follow their own path. It is a path that is paved with pretty smooth and clean sounding AOR and heavy rock with some really excellent songs but unfortunately also a few fillers that add little to the genre. It must be stated that the singing voice of Tommy is pretty easy on the ear and I can understand why he was chosen by Tom Scholz. To the highlights we count the short but very subtle instrumental ,,Into The Storm’’, the rocking title track and  the ballad ,,Still In Love’’ while ,,Rock N Soul’’ with its horn arrangement is a bitter pill to swallow. Overall not a bad CD in the genre, a bit played on safe perhaps and at moments lacking consistency.