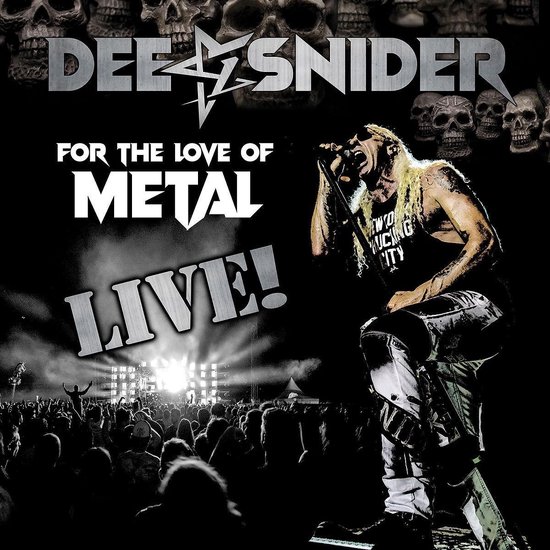 Dee Snider is a rock/metal icon, if you like it or not and he will not quit performing even though Twisted Sister stopped. Two years ago Snider released the excellent album ‘For The Love Of Metal’ and it was indeed a “metal” album and much heavier and better than the Twisted Sister albums. Now, two years later Dee F… Snider (as he yells out a couple of times), releases ‘For The Love Of Metal Live’; featuring 17 metal/hard rock anthems. Snider overwhelms you with six songs from his last solo album, eight Twisted Sister classics, two Widowmaker songs, one cover, being AC/DC’s ,,Highway To Hell” and one new studio track called ,,Prove Me Wrong”. The latter being a typical Snider song, groovy, loud, and cheeky; excellent track indeed. This live album, recorded at a.o.  Bloodstuck (Walton on Trent) is a true heavy metal album and Snider (and band) sings with a lot of passion and enthusiasm, although Dee’s voice is not what it used to be as he definitely has a deeper voice now. No need to say that classic Twisted Sister songs, like ,,I Wanna Rock”, ,,We’re Not Gonna Take It” have the most impact on the audience, but I prefer Sniders new songs like ,,Tomorrow’s No Concern”, ,,I Am The Hurricane”, ,,Roll Over You” and ,,Lies Are A Business”, which are real metal songs. And these are all filled with great guitar work, catchy hooks, and excellent vocals by Dee and they stand out of this album as they are played with very high energy; it is really in your face metal as these songs kick you in the balls. Sniders small talk (scream “fuck yeah”…) is in my humble opinion absolutely redundant, but the music and the quite raw production of this great album even this up without a shadow of a doubt. ‘For The Love Of Metal (Live)’ is a great album, grab yourself a beer, put this album in your CD player, play it at maximum volume, sing or scream along and keep head banging till you are out of breath…. as Snider yells out in the third track “You Can’t Stop Rock ‘N Roll” !!