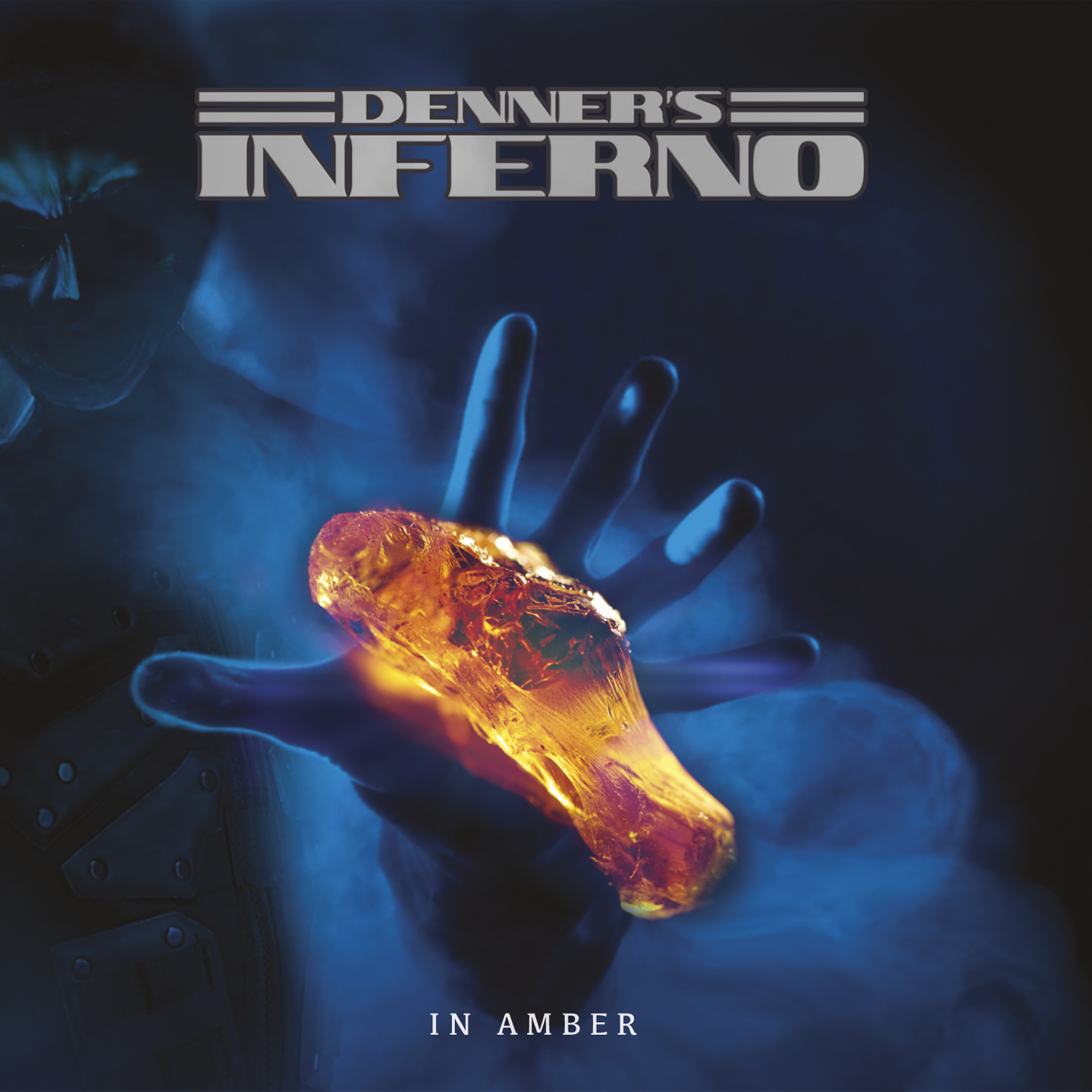 Michael Denner has become a household name in metal since his recording days for Danish Mercyful Fate and later with King Diamond. Since then the man’s legacy has expanded and he released a wide variety of metal and hard rock albums of which most established as memorable. Zoser Mez’s `Vizier Of Wasteland’ is one of those albums bearing the ‘cult status’ mark since its release in 1991. In 2012 Denner released `Denners Trickbag’ exploring a more progressive side of music, but it all led to this brand new band Denner’s Inferno. A band I like to link to Zoser Mez’ classic rock ingredients, though differentiates in terms of style lacking the psychedelic tone. `In Amber’ is an album displaying Denner’s varied interests and musical craftsmanship.

Especially the addition of US powerhouse shouter Chandler Mogul (Outloud, Chrome Public, etc.) makes a difference on this debut. With the music crafted around Denner’s impeccable shred skills, it is Mogul adding panache. His vocals whelm with classic grandeur and 70’s power. It gels perfectly with the sound of the band that pulls forward in classic tenure. Opening ,,Martriarch” is build around Denner’s intrinsic playing and marches forward in UFO style and pace. Michael’s soloing is jaw dropping and on par with the music, though he plays his shred card too frequently. All songs are of high quality and have that occult side-line and lustre so present on Denner’s catalogue. The album unravels with intensity and Denner’s and his band of seasoned veterans draw from rock’s finest era. We hear low toned ominous heavy riffs in Iommi-style (,,Fountain Of Grace”) being exchanged for Page like melodies and progressive elements touching all ends of the spectre. ,,Loser” has a Bad Company vibe, without jawing too bluesy. Memorable moments are plenty, though it takes time for the tracks to really nest. ,,Sometimes” is top notch and spotlights the variety and capabilities of Denner and his men perfectly. Of course Michael is present, a bit too much at times, and his riffs and melodies are impressive and rich. He has the ability to implement contrast and richness without straying from the tone of the track. Though he is all too present at times, it adds to the organic classic sound of the album. And above all: Denner apparently enjoys the interaction with his vocalist who does add to the potion of `In Amber’. ,,Taxman” oozes a Deep Purple vibe and revives the Blackmore-Gillan tension, ,,Run For Cover” links perfectly but features a Uriah Heep glance. This variety is also what enhances the album. That, and it’s organic honest sound and appeal. It is classic as classic can be, and there’s tons of joy in this classic rock jukebox called Inferno. Absolute highlight is the prog injected ,,Pearls On A String”, which really nests on the spot. It twists and turns with classic symphonic rock elements from 70s UK giants, and it morphs into a pleasant rock track.

`In Amber’ is an album oozing confidence and it feels like a homage to the classic acts that influenced Denner. The guitarist manages to inject the package with his typical occult feel and also fires it up with his impressive guitar soloing and riff-rage. Sometimes a bit more than beneficial, but always rich of tone and with jaw dropping skill and style. Denner’s Inferno is a step in the right direction and hopefully this band gets the chance to compose and jam for a follow up revealing its real potential. Pleasant…