DENY THE FALLEN-Symptoms Of Eternity 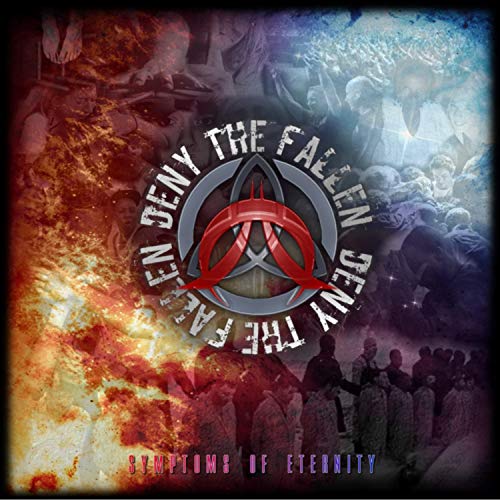 DENY THE FALLEN-Symptoms Of Eternity

Worldview’s `The Chosen Few’ brought one of metal’s finest vocalists back to the plate: Rey Parra of Sacred Warrior fame. Unaware of a possible follow up to their grandiose debut however, Rey was invited by former band mate Jonathan Johnson, to take the helm at a brand new metal band Deny The Fallen of which their debut album `Symptoms Of Eternity’ was released several weeks ago. Being stunned by his vocal performance on Worldview, I wondered if Parra could repeat this release, and above all; what would he have in mind with this new band?
Anyone hooked on intense power metal can rest assured: Deny The Fallen is a perfect match for Parra and his catalogue. The music seamless catches on were Worldview left off, and twists it up a notch! Deny The Fallen kicks into gear full frontal with the blunt ,,Oblivion”, leaving no room for questions. They pack power, hitting you in the gut with impressive power and drive. Loud and fierce riffs kick it into gear, and the following double bass packed ,,Mortem Amici”, even pushes the metallic envelope further. Thrashy riffs fire on all engines and Parra lays down a brilliant performance. He roars his pipes on the following and blunt ,,Hands of War”, which is driven by steep curbed riffs and progressive drumrolls. The title track has a jumpy nu metal touch, with great stop – motion interaction, delivering a modern twist to the traditional fierce power metal galore. It’s this progressive touch, combined with the rhythmic ponderous sound and piercing guitars that really keep this album thundering onwards like crazy. The powerful and recognizable riffs don’t lack melody nor miss impacting hooks and are perfectly add to Rey’s impressive vocal range. The whole album is packing power and sounds fresh and modern, though deeply rooted in the classic US (extreme) power metal era. Sometimes tilting towards nu metal, while a moment later they roar with bay area power. It’s deep and dark-toned with anger unleashed on every track. The package is impressive and extremely well crafted, and comes with Parra’s typical lyrics, not lacking social criticism. The progressive toned ,,Murder Machine” really showcases the band’s key features, with its near death metal breakdown. Immense power, with double bassdrums firing away while deep grunted narratives overpower Rey’s towering and roaring vocals. The ominous tone is present on all tracks and the anger spits from the inside out. ,,Burning the World” is another power packing highlight that breathes fire. Tougher and darker are the faster paced ,,Razin’ Kane” and the immaculate ,,Death Rattle”. Both tunes pack a lot more power than the last Metallica album does while played on double speed. It just shreds with genuine power and unloads power chords by the dozen. Not only musically it is all brought with heartfelt emotion, the production of the album is as impressive as the sonic beating the band serves up.
Deny The Fallen not only reunites Johnson and Parra, it also unites the musician’s elusive past with today’s most powerful metal possible. Fusing their astonishing feeling for melody with aggressive toned music works out perfectly on this remarkable album. Genuine and heartfelt is their emotion, packed with intense power, delivering an excellent album that grows on you with every spin. An impressive record that grabs you by the throat upon first spin.