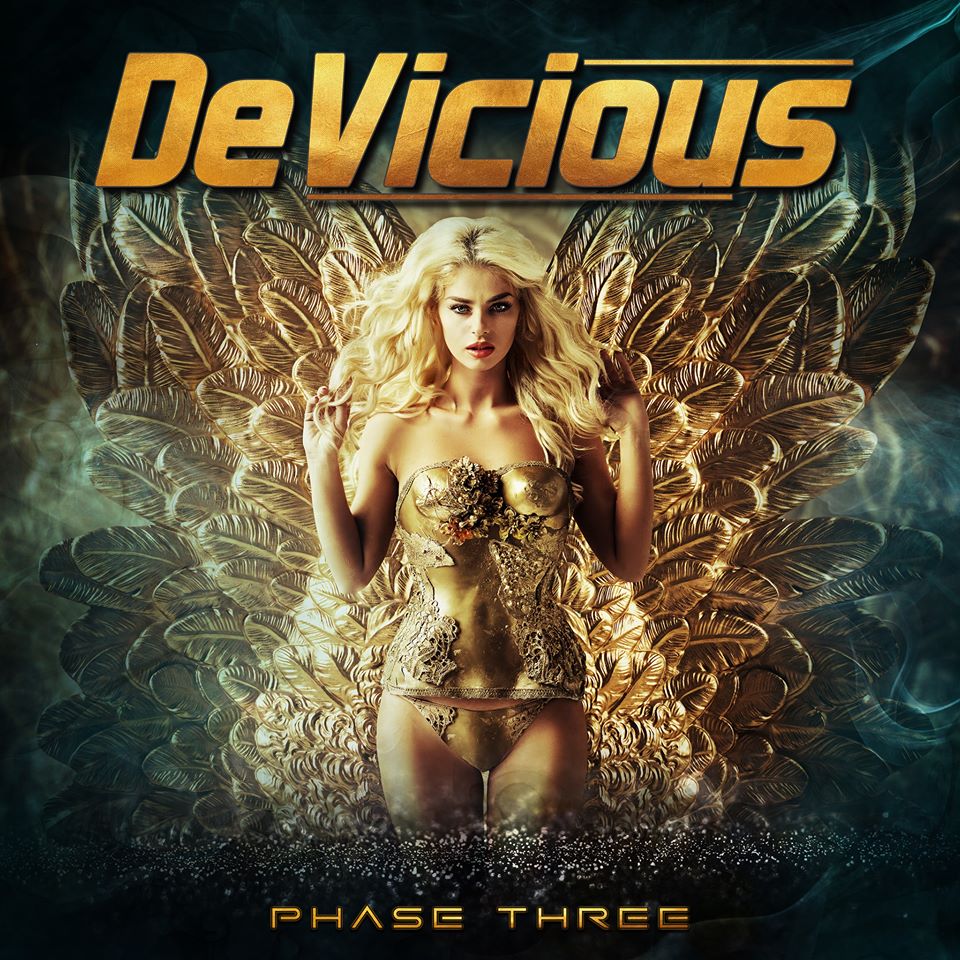 No band is more productive than Karlsruhe, Germany based DeVicious. Within a year they released their debut `Never Say Never’ and their sophomore 2nd coming `Reflections’. Followed by this brand new `Phase Three’ the band grips momentum. DeVicious shed skin on this third chapter replacing powerhouse vocalist Zoran Sandorov with Italian youngster Antonio Calanna, making this his debut recording. Calanna however already managed to impress during the DeVicious tour with Creye and Bormann’s Jaded Hard in the fall of 2019. His energetic stage performance and appeal radiated off the stage. Let’s check out “Phase Three”!

“Running on adrenaline, Music without safety pin…” is one of the lines in the new video single ,,Firefly”. It’s a typical 80s/90s power anthem with sticky melodies that launches Calanna who’s warped into our lap from those heydays. His radiant personality and rough edged (higher) voice perfectly match Radivoj Petrovic’ ravishing metallic riffs that drive the song. It is trademark DeVicious deeply rooted in those roaring heydays, but also capture the driving edge of modern rock and metal. Melodic with great metal texture and drive. It is all keenly twisted into form by the band’s main songwriter Alex Frey (bass), who manages to kick out melodic earworms by the dozen. Surprisingly Frey choses lighter topics and typical rock lyricism instead of his social critical points of view. Following Frey on Facebook, the man has a spot on view on modern day society and topics and is spot on in his social observations making his lyrical content surprising.
Back to the album however Frey uses of the hair metal ingredients such as on ,,Mysterious”, the keyboard opened and double kicked (Hello House of Lords). ,,Higher” and the sing along evoking ,,You Can’t Stop Now”, preceded by the 70s sci-fi reminiscent ,,Unstoppable Interlude”. ,,Our Song” kicked into gear with towering keyboard swirls and Petrovic laying down his signature steep metal riffs. Easy to devour and matching the style of the music. More exquisite and daring moments are present: The bass pulled ,,Calling My Name” shows excellent interaction between Frey and Lars Nippa laying down thunderous breaks and hooks and packing subtle dubbed keyboards from silent force Dennis Kunz. ,,Burning Skies” is of the same magnitude, yet radiates a darker and rawer edge with growling vocals from Calanna, clearly schooled classically as his vocal work oozes some musical appeal. Pitching high and being all over the board, he gives the lyrics the needed “schwung”, though somewhat forced at times. The youngster frequently switches register and he holds the comfortable lows needed as well as some higher register. Not always instantly comfortable, but always belting out with grace and drive, making the songs radiate. It is all executed with appeal and enthusiasm, and `Phase Three’ features instant classic tracks such as ,,Pouring Rain” with its throbbing bass and switches between multi layered bridge and chorus. The vocal interaction is absolutely phenomenal emitting ear mingling melodies in repetitive motion. ,,Walk Through The Fire” also follows that pattern with bridge and multi-layered choirs pulling it forward over a driving riff. The bass is pushing it forward and more melodic than this it won’t possible get. ,,Rising From A Thunder” has a forceful drive and urging vocals on high pace, with great drums and double bass firing. The melody again is very sticky and fuzzy. The genre mandatory (piano) ballad ,,Bad Timing” is announced as ‘bonus track’ but can’t be discarded on this release. It is sticky sweet and Calanna delivers with an emotional sniff and tear. Not powering up it only fires on different cylinders with the welling vocal interaction.

`Phase Three’ again drops within a year from its predecessor and I was anxious for it to be rushed into. The album however is very consistent and displays Frey’s writing streak to be phenomenal, dropping rock tunes by the dozen. All tracks have an untameable energy and feature inspired performances. The choruses and melodies are sticky and immediately nesting, with the drive being magnificent. Calanna needs but adds to the sonic palette of DeVicious. Much like fellow countrymen Bonfire, Mad Max and US counterparts Danger Danger, newer acts such as Brother Firetribe and One Direction, DeVicious served up your daily potion of melodic rock. Fuzzy comfortable hammer anthems that easily nest on the spot. Their enduring qualities to be unveiled…