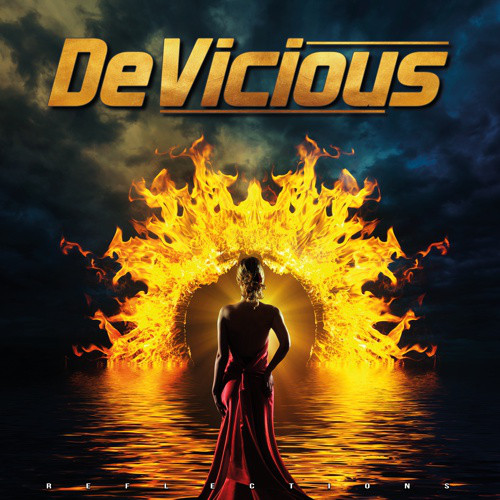 International rock band DeVicious released their debut independently prior to a re-release on the Pride & Joy Music label six months later. An album packed with driving melodic hardrock that set their name firmly within the European rock scene. To not lose that buzz, the band took off to the studio to record `Reflections’, which was released upon the masses on March 1st.

The album takes off with the solid and melodic rocking ,,Long Way Home”, which links to their debut directly. With producer Alex Frey twisting the knobs, the band is presented with more depth and a stalwart production taking highlighting the band’s most attractive ingredients. Melodies are slick and subtle, guitars are pulled to the front end of the mix, and vocalist Zoran Sandorov (aka Mr. Sanders) is encouraged by Frey to push the envelope on `Reflections’. His voice is powerful and radiates more than on the previous album, as does the impeccable guitar work that is supported by swirling and impelling keys. DeVicious showcases to be one of the genres most promising acts and really impresses at times. Half the album is of impressive high quality with melodic rock hammer such as ,,Desire”, the rock anthem ,,Saturday Night” and the keyboard pumped ,,Run Together” with its sticky melody and chorus, nest in your head on the spot. ,,We’re Dying” is an impressive rock track with straight forward rocking riffs and drum ‘n bass over swirling keyboards. The song features Zoran’s best vocal delivery with him expressing himself by nailing an impressive vocal job, versatile and powerful with a poppy outline ringing through. Hit potential in line with the fine tuned melodies and appeal of the album. The hyper melodic and extremely catchy ,,Feel The Heat” is another example of their song writing skills, and it will be a live classic for sure. ,,Never Let You Go” is another sticky tune featuring Wig Wam’s Age Sten Nilsen who lines up with Zoran perfectly. ,,Flying” is a tasteful rocker with Pink Cream ’69-like harmonies and biting guitars in the best Kofler tradition. Throughout the album it becomes clear that Radivoj Petrovic is more than content with this production as he gets the spotlight to lay down his intense riffs and piercing guitar solos. It adds to the depth of the tracks. There are no really weak songs on this album, but still I get the feeling the band has opted to go into studio to seize the moment a bit to fast. Some songs simply aren’t as intense and perfectly crafted as the tracks on their debut and the aforementioned songs. Some sound to predictable and remnants of their debut recording days, or likely the songs haven’t given the time to mature enough, which is a shame. ,,Understand” simply hasn’t got the magnitude of the DeVicious songs and falls a bit short laden with its clichés. Though this is only a minor issue, the band should weigh their options. Funny enough the bonus track ,,Manhattan Memories” would have perfectly suited the album better than “Understand”. But that’s a matter of choices.

DeVicious’ `Reflections’ is an energetic and poisonous melodic rock album that will certainly land among this years’ best releases. It is perfectly produced and shines brightly with Zoran’s vocals as a binding factor. The fact that it comes across somewhat as a rush job with lesser-matured tracks is a minor subject as the overall quality level is extremely high. I’m convinced DeVicious simply has a lot more to offer once taken time for the songs to mature, and I’m already looking forward to their next album. Listen in and love it!