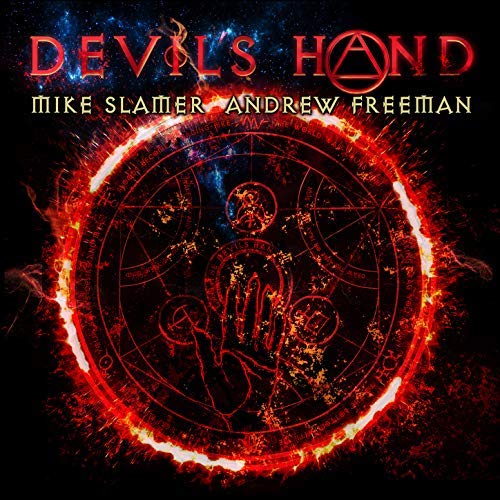 December 7, 2018 by Michel van de Moosdijk - More about our team

When I hear that British guitarist/composer/producer Mike Slamer is involved with a project or band my heart always starts beating faster. Ever since his City Boy days I have been following this talented musician on his adventures with Streets, Steelhouse Lane, Seventh Key, Terry Brock and the several production and sessions jobs he has done through the years. Around this time Mike should finish up production of the third solo-CD of Snakecharmer and Heartland vocalist Chris Ousey, so that is something to look forward to in 2019! It is safe to say that when Mike Slamer is involved the final product just does not disappoint. Slamer is a studio man, he is not a fan of performing live. The last decade or so he has hardly been on a stage I believe. His latest project is called Devil’s Hand where he has joined forces with Last In Line vocalist Andrew Freeman. Lately I have been reading some articles stating that Devil’s Hand is one of the weaker Slamer productions as his music does not fit totally with the vocal abilities of Andrew Freeman. Really? I have a different opinion. Freeman fits right in with what Mike Slamer has written. On the first Last In Line CD Freeman already showed what a great vocal range he has got and on this CD he shows a lot more of that. The thing is that when Mike Slamer is involved you hear that immediately. The man has a specific sound that has done magic for Streets, Steelhouse Lane, Seventh Key and those ‘features’ and signature sounds are also there on this record. You just know that you are going to get top notch melodic rock with lots of variety in between the songs. The binding factor between all these above mentioned bands is the way Slamer plays his main instrument and the way he builds up his songs and sound. It is so typical, so stylish and so god damn good. Whether a song is fast and up-tempo (,,Push Comes To Shove’’, the title track) or semi-acoustic (,,Justified’’), they all have this certain ‘I don’t know what’ charisma in them that is so typical for Mike Slamer. But it is not all about Mike Slamer on this album. Andrew Freeman came really to the attention of the rock audience as a member of The Offspring (as guitarist), Hurricane and of course Last In Line. He has developed into an all round rock singer, being able to handle all types of songs. On this CD he just feels at home, free and relaxed. These type of rock songs suit him like a glove and although it may not be on the cards for the near future we might hope that this project gets a continuation in the next couple of years or so as the eleven songs are without any exception rock royalty!