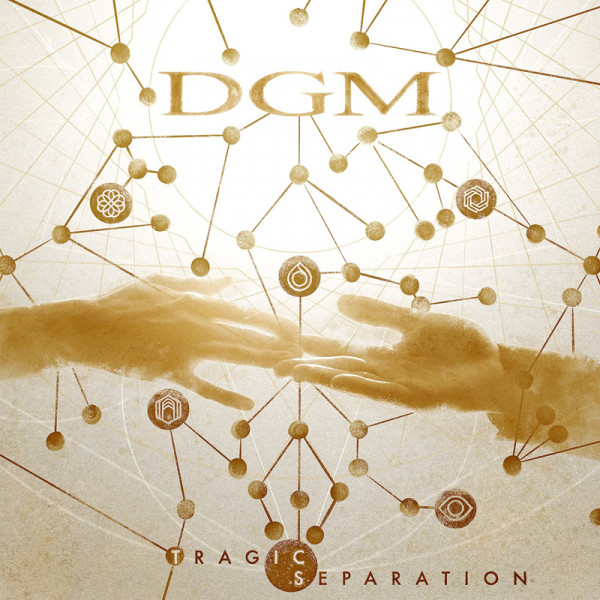 DGM are one of the long stayers in the Italian rock scene. They have been around for a few decades now, producing nine albums and presenting number ten with ‘Tragic Separation’, the successor to the 2016 release ‘The Passage’. During the years DGM has been led by guitarist/producer Simone Mularoni and power vocalist Marco Basile. They have taken over the command (DGM does not have any original band members left) and although there has been a four year gap between ‘The Passage’ and ‘Tragic Separation’ especially Mularoni has not been resting on his laurels. Having his own studio called Domination the last couple of years he has been involved with Sunstorm (Joe Lynn Turner), Sweet Oblivion (Geoff Tate) and Lione/Conti albums and other projects.

‘Tragic Separation’ is a concept album dealing with choices people make in life and the consequences that follow. With the exception of closing song ,,Curtain’’ all tracks clock between five and eight minutes each starting of immediately with a firm statement in the form of ,,Flesh And Blood’’ that sets the tone for a very upbeat and energetic progressive metal album where especially Marco Basile is able to show all the different ranges in his voice and the man really has outdone himself. The whole album is a perfect example of modern, melodic yet accessible progressive tinted metal dominated by an outstanding rhythm section (Andrea Arcangeli on bass and drummer Fabio Constantino), a guitarist that impresses with heavy riffs and melodic solos and a keyboard man in the person of Emanuele Casali who knows his place. He does have some solo spots like in the title song where there is a flashy duel between the keys and the guitar but in general Casali is the man adding the colour and the depth in the sound of DGM. I have already mentioned the prominent role of singer Marco Basile and can only say that DGM has used the gap between this album and ‘The Passage’ well by composing all thrillers and no fillers. Add to that an explosive sound and there you have it: the finest record in the history of DGM!