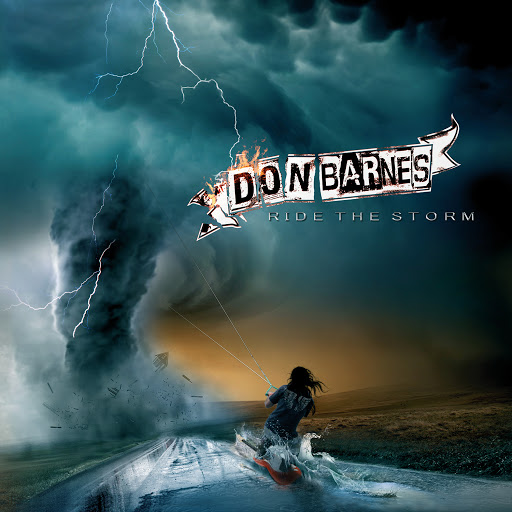 Shelved for nearly 3 decades Don Barnes’ debut album finally sees the light of day through Andrew McNeice’s Melodic Rock Records. Alongside `Ride The Storm’ McNeice also managed to release another shelved classic, but that’s to be reviewed later. First we focus on Barnes’ album, and check whether it has stood the test of time.
Well, for those still in love with 80’s melodic rock and AOR, much like me, will embrace the album as much as they’ll embrace McNeice’s efforts to have this see the light of day. `Ride The Storm’ is an impeccable record, featuring all there is to shoot it to the top of the charts in the old days. Don Barnes’ typical roasted and hoarse voice combined with the more melodic edge provided by the wide array of studio and session musicians guarantee 10 tracks tearing down the sun roof of your convertible, cruising down main street. Yes, those days are long gone, but taste is of all times, especially with us, seasoned rock adepts. Whether you play the title track of the keyboard pumped ,,Looking For You”, you know you’re in for a wild ride. It warps you back to your record player taping tracks you love for your cassette player. Odd times come to mind indeed.

`Ride The Storm’ also takes 38 Special’s flirts with AOR and contemporary rock of the 90’s one (or two) step(s) further towards Journey, REO Speedwagon and Desmond Child-like proportion. Slick melodic tracks with memorable choruses and ditto melodies. Drenched in nostalgia I spin through this excellent CD, wondering why so much money spent had to collect dust for this many years, as it might have been a milestone album if it was released in the days. Much like VanZant’s album it combines the best of both worlds: southern rocks distinctive edge and melodic rock’s close harmonies and impressive melodies. Perhaps it may balance the fine line a bit often (,,I Fall Back’’, ,,Maybe You’ll Believe Me Now”), `Ride The Storm’ delivers for sure. Yes, some of the tunes nowadays might come across tacky, but let’s not forget, it took 30 years to reach us.
Just check out the wonderful ,,I’do It All Over Again” with its distinctive 38 Special Barnes’ vocals combined with Giant-like melodies and guitar work, the song could have easily been featured on any 80’s or 90’s movie soundtrack. Same goes for the driven roadscore ,,Everytime We Say Goodbye”, and the half paced ,,Feelin’ Stronger Everyday”, typical slick 80’s tunes, with towering choruses and sticky melodies! ,,After The Way” revives the 38 Special spirit slightly more, and ,,Johnny Ain’t So Cool” warps me back into the ,,Reckless” Bryan Adams days, but the overall winner is the impressive melodic powerhouse ,,All My Life” with it’s impressive chorus and sticky harmonies.

Yes, our beloved music stood the test of time easily. Sometimes the songs come across dated, but that’s exactly what 70% of my gut feeling nowadays demands from my CD collection. I most frequently grip back to those days and dated albums, and some ‘new’ music is gladly taken in to expand my collection. Even better is the effort made to bring this album into the present using a brand new remix bringing the guitars more to the front and pushing the polished harmonies to the background a bit. With Barnes’ vocals highlighted it sounds more vivid than the original 80’s mix featured on CD2. It’s the best of both worlds in one 2CD set…

AOR and melodic rock fans: spend your money…. all others may discard!