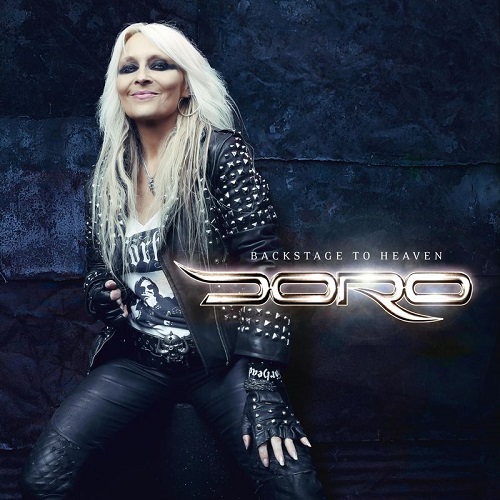 Bridging the gap between her last album(s) `Forever Warriors, Forever United’ and the current tour and upcoming summer festivals is `Backstage To Heaven’, the 4-track Doro EP that just landed in my mailbox. Doro surprises us with two studio songs from the 2CD album featuring 2 guest musicians, as well as two live tracks from the album as fillers to uplift the status of single to EP most likely. The surprise is the fact that this 4 track is released as a limited edition colored vinyl in the irregular 10-inch format.

,,Backstage To Heaven’’ is a melodic rock track featuring German multi-instrumentalist and comedy icon Helge Schneider playing the saxophone solo on the song. The song doesn’t differ from the original and is the same melodic tune, with Doro moving away from her nasal vocals slightly. ,,Heartbroken” features none other than Doug Aldrich of Dead Daisies and Whitesnake fame laying down an impressive solo packed with his benchmark Gibson sound. Frau Pesch is moaning and expressing her agony of being heartbroken, to burst into her typical Doro toned chorus. The song benefits from Doro’s performance and Aldrich’ rich toning and storming screaming entry does match the mood of the track.

Side B opens with the live version of another crowd pleaser; ,,Blood Sweat And Rock ‘n Roll” on which Doro sounds vibrant and typical as in her prime. The metal queen never seems to lose her charisma, and radiating personality shines through on the dynamic and honest live recording. ,,If I can’t Have You – No One Will” brings in another guest to star on this EP; Amon Amarth’s Johan Hegg, who roars loud on this live performance. Contrasting deeply with Doro’s nasal voice, Hegg spits dirt and gravel on this live performance that fires on all engines. Guitars are fierce and pitched high, igniting the live atmosphere captured perfectly.

Though it won’t have me running to the record store directly because of the music, the appealing coloured vinyl and format will be something that finds its way to record collectors and fans worldwide. It is a nice addition to any collection for sure, and it is worth listening in digitally.