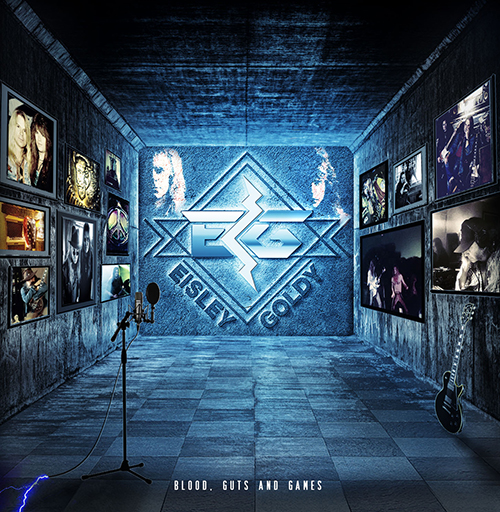 December 4, 2017 by Michel van de Moosdijk - More about our team

Singer David Glen Eisley and guitarist Craig Goldy worked together on the very first Giuffria album way back in the eighties and remained pals ever since. The last couple of years things were a bit quite around Eisley while Goldy was still rocking with The Dio Disciples and Resurrection Kings while he also played a big part on the latest Appice album ‘Sinister’. During the years Craig Goldy has developed himself into a multi-instrumentalist mastering bass and keyboards as well. One day totally out of the blue he visited Eisley in his house and told him it was time to get back to work. This led to performing some gigs and ultimately a new CD with the title ‘Blood, Guts And Games’. They called in the drum skills of Ron Wikso and together they manufactured this CD keeping the production in their own hands while Alessandro Del Vecchio took take of the mixing and mastering of the album. You can hear clearly that the roots of these guys lay in the eighties. Especially the first three songs ,,Lies I Can Live With’’, ,,The Heart Is A Lonely Hunter’’ and ,,I Don’t Belong Here Anymore’’ take you back to those Giuffria days when they produced their hit single ,,Call Of The Heart’’. It is good to hear that David Glen Eisley still has that certain determination and that undefined emotion in his voice. Especially on ,,I Don’t Belong Here Anymore’’ that characteristic can be heard at its fullest, but also the ballad ,,Believe In One’’ shows Eisley at its best. At the age of 65 the singer can still produce quality. With Craig Goldy at his side it is not hard to recognize that ‘Blood, Guts And Games’ even with a few mediocre tracks present, is an excellent comeback for David Glen Eisley and also for Craig Goldy another piece of evidence that he is not passed it yet.