ELVENKING-Reader Of The Runes – Divination 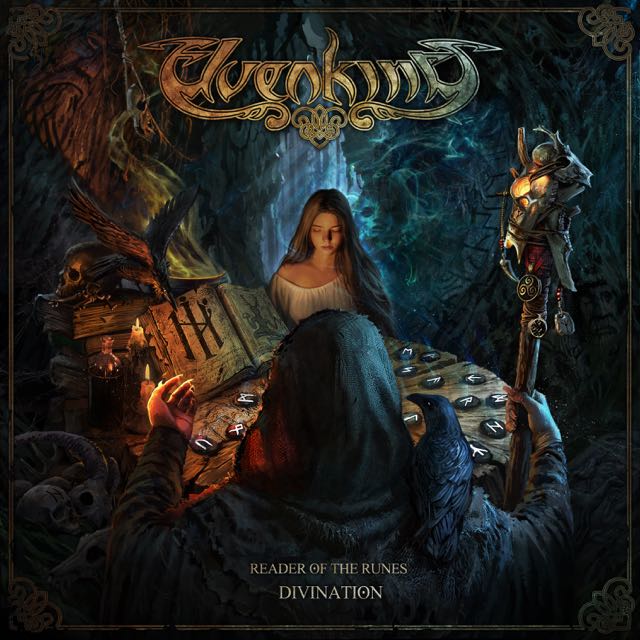 ELVENKING-Reader Of The Runes – Divination

I remember over 2 decades back being introduced to this band through a sampler in my Hellion records order. The band managed to seize my attention with their symphonic folk-injected heavy metal, which later would become widely accepted sprouting many offspring acts surpassing the band igniting my initial spark for the genre. `Divination’ is the first chapter of Elvenking reinstating their position as frontrunner of the genre.

Not only does the band reinstate their position, `Reader Of The Runes / Divination’ also injects the genre with a fresh breath of air. From the ominous chants on the intro ,,Perthro” onwards, the album unravels with tremendous allure, packing drive and power. Galloping drums and signature melodies are fused with medieval folk themes pulling forward with excellent pace. The progressive time changes are adding to the dramatic scenery. Lyrically the songs are kept together by the keenly crafted musical outline holding the concept together. Little twitches and recognizable melodies with reoccurring themes are implemented in pasting a cinematic outline. Big melodies and towering chants are impacting on the dramatic turn of events. Folk elements are in place and enhance the medieval touches with Lancs’ violins as the band’s benchmark sound kept alive. Ayden and Rafahel’s guitar interaction is dense and intense and add the fuel for Damna to ignite the vocalic fire. Though his vocals are somewhat isolated and stand alone in tone, the outcome is eminently impacting on their sound. Especially the title track brings out the best in the band’s cohesive sound. More memorable tracks are at hand like the gradually intriguing ,,Silverseal”, with its cluttering pace stomping into the slick chorus, or the melodic violin pulled ,,Eleanor”. ,,Malefica Doctrine” brings an entirely different side of the spectre to the plate. Opening with black metal allure the band storms into blasting choruses with blast beats drums and towering guitars. Dark grunts add to the drama of the vocals going all the way in with towering melodic pomp. The band touches all sides of their catalogue with the diverse and sticky ,,Sic Semper Tyrannis” with its variety and eponymous tragic hauls. It sums up the multi-layered mastery of Elvenking. With the first half of the album focusing on more symphonical elements the band keenly lures fans unfamiliar with their elegiac medieval roots and captures the attention while slowly enticing chants and folk sections. The depth is inevitable and the alluring qualities are well balanced making it an enjoyable album on the verge of tackiness. Never tilting the bowl towards predictable Elvenking handles their musical mood board well. The overall power is excellent and puts an exclamation point to the first chapter of the concept for `Divination’. Thus this new album might well be their finest moment, and definitely their most glorious release.

Elvenking is an enjoyable band with a wide and varied musical direction appealing to many fans of the genre. Less generic than many of their counterparts, more true to their medieval and folkish rites injected, they pull forward with an intense new album. Little more experimental they touch the mental vein frequently, but in a good manner. Though it will not immediately attract a new audience, it will definitely firm their status and spread joy to the community they are addressing with their high wallop packing cinematic music. Enjoyable and medieval clad.