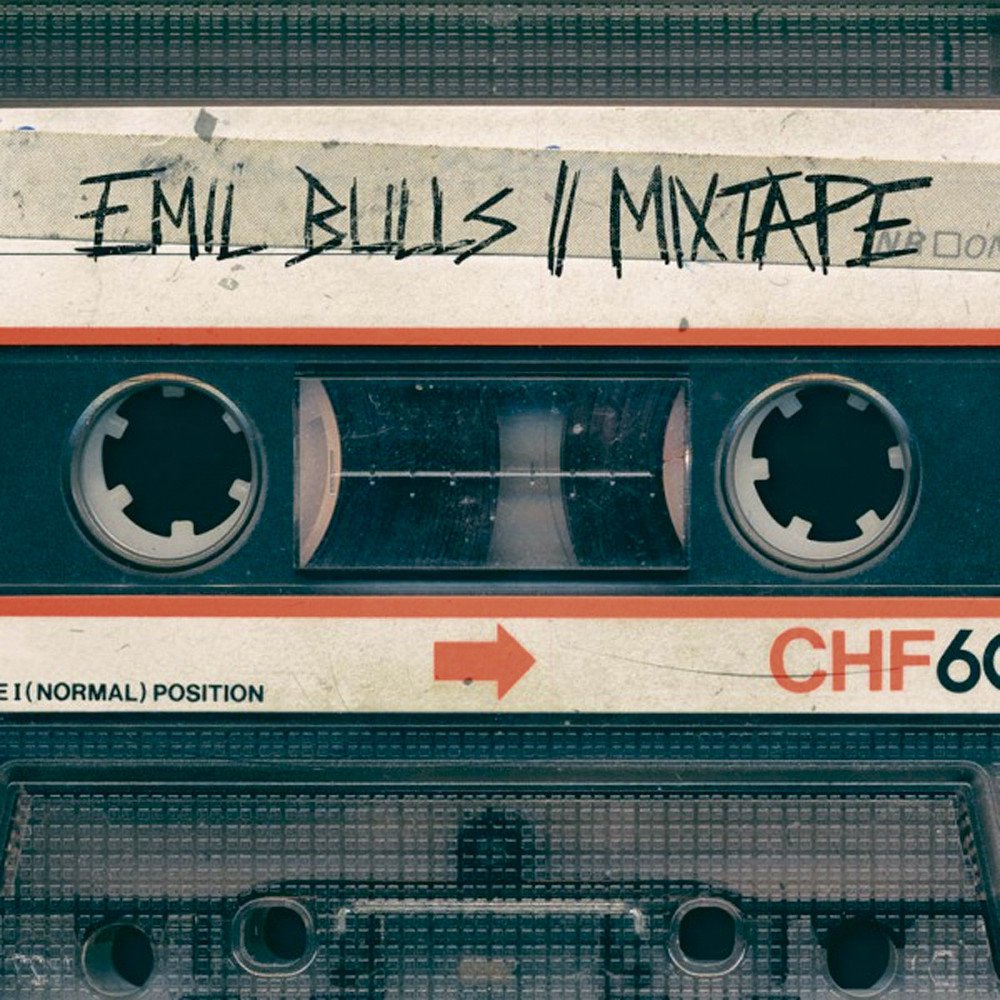 That moment you realize you can’t come home anymore without your daughter having invaded your computer. With me being very aware of the frailty of my privacy on my personal pc, I today was flabbergasted by the experience of the 14 year old rocking out to one of the promo albums in my mailbox. Teenagers and music usually mix into strange potions, incomprehensible blends of beats, soundfiles and repetitive jingle-like hooks that propel one hit wonders. Most of these, if sung, are boosted by layers of vocals with computersync technology. Odd gems often wander in between grabbing attention in a subgenre. One of them: Billie Eilish. The teenager with the melancholic taunting songs is appealing to youngsters all over the globe. Teens that never ever heard of German metal band Emil Bulls…. And this is where my daughter comes in; she was spinning the soundfiles of their promo for ‘Mixtape’ on my computer, mainly because of the mention of her idol Billy Eilish.

‘Mixtape’ warps us old farts back to the comfort of our own teenager years. A time when vinyl was expensive, and trading tapes was the most obvious. Those buying 7” passed around the recordings of their latest obtained tunes to friends who passed it onwards building a mixtape. Or you recorded your tunes from radio, carefully pushing the knobs to records the least of the ever-talking DJ announcing your favorite track. It would allow you to enjoy new music and in the meantime saving up for the new full album of your idols. It is the idea behind ‘Mixtape’ by Emil Bulls, the German alternative metal band. A band with a stubborn idea playing metal music, and a unique identity developed over the years. With this new album they managed to achieve grabbing the attention of my teenager daughter who recognized a handful of classics as well as newer pop classics. From Destiny’s Child’s ,,Survivor”, to Billy Idol’s ,,Rebel Yell”, the band injected it with a unique driven metal sound. Loud riffs and thunderous drums and bass hold together the blend that kicks in motion instantly. The injection of thick and bold grooves into the pop structure of most tracks gets me psyched as much as my daughter. Helloween’s ‘Metal Jukebox’ comes to mind, but that looks rather pale compared to Emil Bulls’ take on the situation. Modern pop tracks and singer songwriter tunes from Eminem feat. Ed Sheeran (,,The River”), The Weekend (,,The Hills”), Bruno Mars (,,Grenade”) and previously mentioned shooting star Billie Eilish (,,You Should See Me In A Crown”) all sound full on metal. Eilish and Mars are perfect examples of how well Emil Bulls executes the coverversions, firing on all engines. It is these songs that have my daughter psyched as were I choose the classics like Placebo’s ,,Every You Every Me”, or the more subtle Pixies classic ,,Where Is My Mind?”. With variety flying of the scale in terms of musical styles, the Bulls manage to stay on par with the delivery of the songs with impressive drive. Genesis’ ,,Jesus He Knows Me” is executed with tremendous power and progressive thrive. KoRn-like guitar scratch and breaks push it into its predictable chorus. The arrangements of the song are close to original, but the progressive elements and guitar firing it up is simply brilliant. It’s the energy injection sustaining off the edges as a frightful metal hymn. One of the songs I originally tend to fast forward is Starship’s ,,We Build This City”, that overtime gone from poppy and playful, to tacky and corky. It seasoned as one of the biggest misses even though it sold millions, but Emil Bulls go into it head first creating an impressive alternative metal track. Clinical opening with raunchy chorus bursts into a wall of driving guitars with stop motion combustion. Double bass kicks and drum rolls power up to tone down and shoot into gear. Not rearranged, close to its initial base, the song just flowers with pompous power. When you think you’ve heard it all it is time to put on the driven version of ,,Jungle Drums” (Emiliana Torrini), which is simply shuffling radiance and ignites every party dulling down without liquor. It is a grenade exploding over and over again with ‘boom boom shakkalacka boom boom’ jumpcore. Scared you off, didn’t I?!
Well, rest assired, cuz this track will nest in your head and heart for a long time. Much like the Eilish song with its subtle and melancholic subnote unloading sudden power in its chorus, and The Killers’ ,,Mr. Brightside”, they pack an unstoppable urge. The Weekend’s “The Hills” is revamped with powerful keyboard effects and humming guitars to follow the original’s heavy tone into the chorus. Powerup with harsher vocals and double bass blasts, the song unravels like Eilish’ heavy poetry.

Without any doubt this new Emil Bulls album is the most pleasant surprise binding hardrockers and metalheads at parties, making them bond with singer song writer addicts and pop freaks as well as classic rockers. Drawing from rock and pops widest outposts, Emil Bulls deliver one of the most enjoyable albums with cover versions ever recorded. Whether you like it or not!