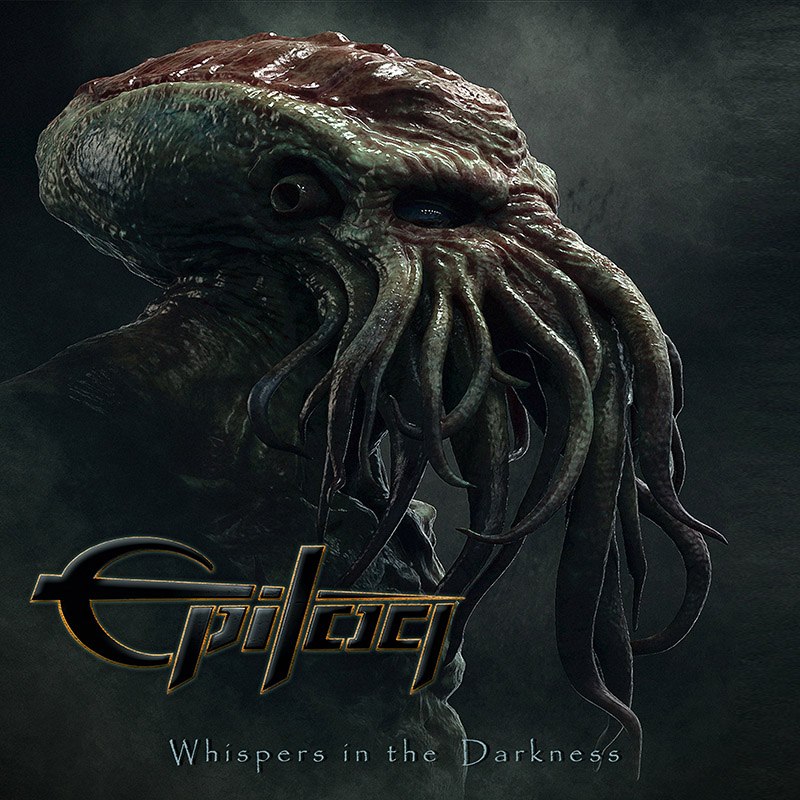 Czech metal?
I did not know what to expect until I heard the new and official debut album of Epilog. “Official” because the band has already released two albums prior, both being demo-recordings put on the market in their surroundings as an album release. Bandleader Michal Zeman stated, `Whispers In The Darkness’ to be their first official release. A release packed with classic rock and with songs mature and powerful. For vocal duties Zeman called upon Charles Rytkönen of Morgana Lefay who gladly accepted and added lyrics for the opening (single) ,,Guardian Angel’’. Unfortunately the Morgana Lefay shouter was unable to join the band during the recordings due to his packed schedule and with Tony Martin (Black Sabbath) declining, Epilog found themselves with a new challenge. A kick in the right direction leads them to young Swedish session vocalist Rob Lundgren, best known for his many cover versions of rock and metal classics posted on a variety of internet sources. Rob’s vocals are a perfect match with Epilog’s classic metal tunes, deeply nested in the 80’s and 90’s. Forceful and driven melodic hymns rooted in the US metal movement of those days leaning strongly on melody and power. Epilog’s vocalist does justice to the previously opted vocalists packing the power and ominous roar of Martin alongside the melody and toning of Lefay’s vocalist. The songs bring out the best of him leaning strongly on melody with the emphasis on the dynamics of US power metal, without discarding the occasional wink to the NWOBHM. It becomes instantly clear ,,Guardian Angel’’ is not the fruit of labour from the Zeman-Lundgren collaboration. The song fits the album perfectly but lyrically differs from the rest. It is however a perfect opening to display the band’s impressive qualities. Zeman’s skills are impeccable and his guitar work is fierce were his solos are exquisite and perfectly toned. A rock solid foundation with powerful drum and bass is providing the thunder the album packs. Epilog might be rooted in the classic metal era, the songs sound fresh and modern. ,,Nightmare HPL’’ kicks out loud with great harmonies and tasty guitar work. Loud riffs pull forward with drums occasionally galloping Euro-style. The title track is extremely melodic and sticky with a dark undertone of gloomy effects. Lundgren howls like Tony in his Sabbath days and certainly is a vocalist we’ll hear about more often. Just check out his loud pipes and skills on the dynamic ,,Entropy X’’. The album features a ton of pleasure for fans throughout the metal world thanks to the excellent craftsmanship of Zeman and his band. Highlights are the title track, the excellent ,,Terminal Train’’ and the wonderful ominous ,,Sun Goes Down’’ with its great vocal work. ,,Other Side’’ ends the album with a dramatic turn. Piano and guitars in moodful setting creating a spooky chime, suddenly kicked into electric gravity with excellent melodies and clean choruses, unloading into jaw dropping solos and a tasty guitar fade out. Most of the band’s lyrics are hailing from HP Lovecraft’s adding up to Epilog’s gloomy undertone. Epilog collides their metal with a classic war epos in the sublime epical ,,Apocalypse Now’’. A taunting and dramatic metal track gripping back to Coppola’s classic from the seventies with the same hectic and primal madness as the 1979 classic. When the pedal goes down, Epilog spawns excellence, but when they crawl forward in slow pace, Epilog is at their very best. Combining the two reveals the bands real skills and Lundgren’s qualities as a performer. `Whispers In The Darkness’ is an excellent introduction to Epilog and their classic metal. Tasty crafted melodic power metal with enough identity to succeed. Only focal point for the future is the production, which can be improved. This production is somewhat ‘open’ and focusing on Lundgren which takes away the overall feel. Drums are too isolated from the rest, especially the splash cymbal, unfortunately. Epilog would benefit from a more dense atmosphere-heavy production intertwining all instruments to create a solid wall of sound. An easily fixed minor issue if a record company would step up. Monsterfaces.net’s Josh P. Crockett took care of the dark artwork of the album.