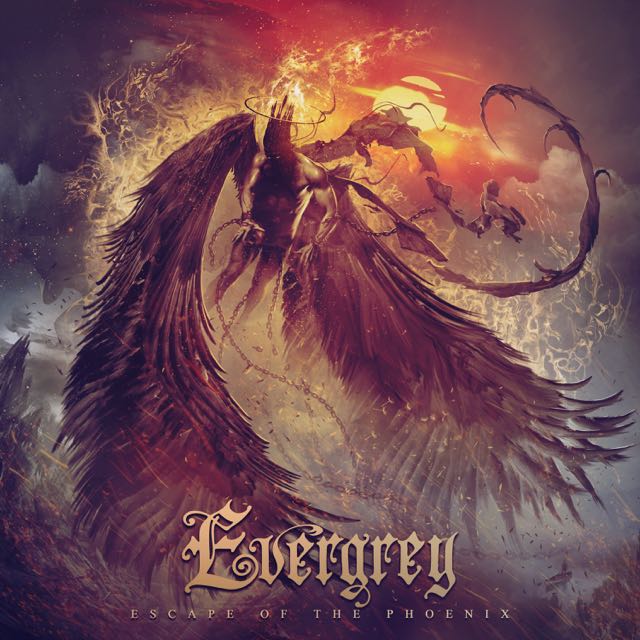 Much like two years ago when `The Atlantic’ hit us on the verge of old and new, Evergrey excites us with the drop of their brand new `Escape Of The Phoenix’ album. With `The Atlantic’ as the closing chapter to the trilogy, which started with `Hymns Of The Broken’ and touched deeply on the withering `The Storm Within’, `Escape Of The Phoenix’ frees Englund of the context and delves deeper in his personal experiences. No concept, no restraints, no holds barred.

Barging in with ,,Forever Outsider” the song lyrically links to the album’s predecessor, as does its tremendous powerful hooks and welling orchestration. Dramatic and powerful the song kicks up a lot of dirt, less progressive, more metal dominated. Ploughing deep, it even features a mid-section with insane breaks and haunting keys. ,,Where August Mourn” is melancholic and exciting. Pulled forward by an insane heavy riff from the tandem Henrik Danhage-Tom Englund, the track is brought to life by melancholic powerful vocals and ominous keys and dance scene reminiscent fragments from Zander enhancing it. A modern twist uplifting and diverting. The urging drums laid down by Jonas Ekdahl are phenomenal as always and his interaction with Johan Niemann’s throbbing low tuned bass adds a significant amount of grit to the track. Its gripping chorus nests instantly. On ,,Stories” Englund shows his great range and sensitive feel for drama. Evolving from piano-vocal spun sincerity, the track suddenly unloads intense power warping it into orbit. The song packs tremendous power and towers with heavy orchestration. An ethereal solo meanders in the midst of delightful arranged piano tingles. Drums and low roaring bass pulsate in ominous tenure. Vocal interaction pushes its envelope further with the song conjuring the best of Englund’s recently released Silent Skies album and the bands deepest gripping tracks. There’s a certain comfort over the discomfort of the lyrical content that hits like a ton of bricks.
,,A Dandelion Cipher” revamps the more traditional elements of the band’s classics and Zander’s sound effects pump it further onwards. Again, the (almost) danceable sound effects add posture to the power bursts of riff and drum. Ekdahl’s drums are dominating underneath the insane brutal riffs and the bass is low and fierce. Diverting from genre mates Evergrey manages to implement subtle smoothening musical tapestry underneath the turbulence driving the track. Zander’s keys add the right amount of density to paste the sound solid without cluttering it. It is subtle and deep, adding to the drama and gripping persistence of the chorus and refrains. Running point on ,,The Beholder” with the modern opening, Zander kicks one of the most powerful intros into gear. Slow stop – motion riff over ebbing and welling thin keys create a transparent sound over which Englund’s most melodic vocals whale and scatter. The song definitely injects a more modern twist without oozing the specific elements of Evergrey’s powerful sound. Its chorus features a bold melody and powerful vocal layers before Tom executes his best performance ever balancing out the guest appearance of Dream Theater’s James LaBrie. The elemental shift of the track upon that break is jawdropping with both vocalists lining up perfectly.

The piano opening of ,,In the Absence Of Sun” is spawning melancholy and Englund twists his words into the spiralling swirl of keys. Epic orchestration with subdued chants opening to a throbbing bass and temporal fluctuations of progressive breaks ‘n shuffles in a meandering low pace. Double kicks and steep riffs are almost jazzy before plunging into the open dark waters. Englund’s solo is simply gorgeous. Towards the end the song picks up pace and starts to flower with a piercing solo from Danhage over pumping orchestration and powerhouse drums and heavy as lead riffs. Barging in comes the heavy hammering ,,Eternal Nocturnal” with blistering syncopated riff and double bass battering away. The song breaks unexpectedly for a strong melodic bridge and chorus with intense dense orchestration. An amazing signature twin solo and duel between Danhage and Englund is star studded. The album’s title track is one of the most progressive tracks of the album. Dominated by Ekdahl’s double kicked breaks and Niemann’s low scattering bass lines it flourishes with heavy orchestrated sections and anger laden lyrics. Questioning whether to rise up for a next battle rather than cave in and escape, the song captures the internal stride of mind versus body. Piercing solo and hard as hell keys resonating through the intense drums and wall of guitars give it that dark poise Evergrey is known for. The song could be a lead in to ,,Leaden Saints” with its powerful intro and withering epic despondencies, breaking from the root of the drum pace. ,,Leaden Saints” is typical Evergrey, yet it packs ample distortion from the classic ingredients. Tough to crack open at first spin, the song keeps growing on the listener. Wheeling riffs and sudden towering arpeggios fired add to the lustre. When riffs align and go against the grain of the orchestration and hooks, the song starts to electrify. Englund reveals a different tenure pushing to the edge of his range, especially towards the end when the larger than life chorus builds up for a final breakdown. Insane!
,,You From You” is another slow mover with hovering guitar and vocal interaction instead of the expected piano swirls. Englund oozes comfort gripping back to his personal life and break up 3 years ago. Musically the tasteful instrumentation appears to reconcile with the pompous magnitude of the chorus and bridge. Midway ,,You From You” scatters with walls of keys over the tasteful epic solo unloading tons of emotion, in line with the desolation oozing from the tune. ,,Run” blasts away from the opening with distorted keys over Ekdahl signature double bass turbulence. Heavy as shit the guitars pull onwards and accolades for the comfort of the chorus suddenly hitting you blindsided by its perseverance. The coherence of melody and arching melodies with the load ponderous drums and bass is hard to define. It is typical Evergrey.

`Escape Of The Phoenix’ is and album that packs all the trademarks of Evergrey’s unique sound. Hooks, nesting melodies, smoothening melancholic passages and enormous orchestration go hand in hand with blistering drum breaks and thunderous double bass. Niemann’s bass riffing and low-end playing is even more dominant than on the conceptional trilogy adding deep grooves. Memorable riffs and piercing solos give way to meandering piano and keyboard swirls as well as jawdropping cinematic solos unloading emotion. The tapestry of the songs is enhanced by impressive keyboard orchestration, or stripped to the bare essence when needed. Even the modern sound effects borrowed from the dance scene DJ’s add to the diversity and emulating depth of the new album, as does Englund’s vocal delivery. He belts deep and pushes to the edges of his range. His performance is topping of the overall performance, which is magnificent. `Escape Of The Phoenix’ is already a highlight for 2021 and again… might be the best metal album of a year just starting. Adding to the appeal of the band’s insane talents is the magnificent artwork from Giannis Nakos of Remedy Art Design.

For collectors and fans I want to point out the art book release of the album featuring the extra track ,,The Darkness In You” on 7” picture single as well as extended artwork. Needless to say the album comes in a variety of formats with a range vinyl issues of different colours and styles.