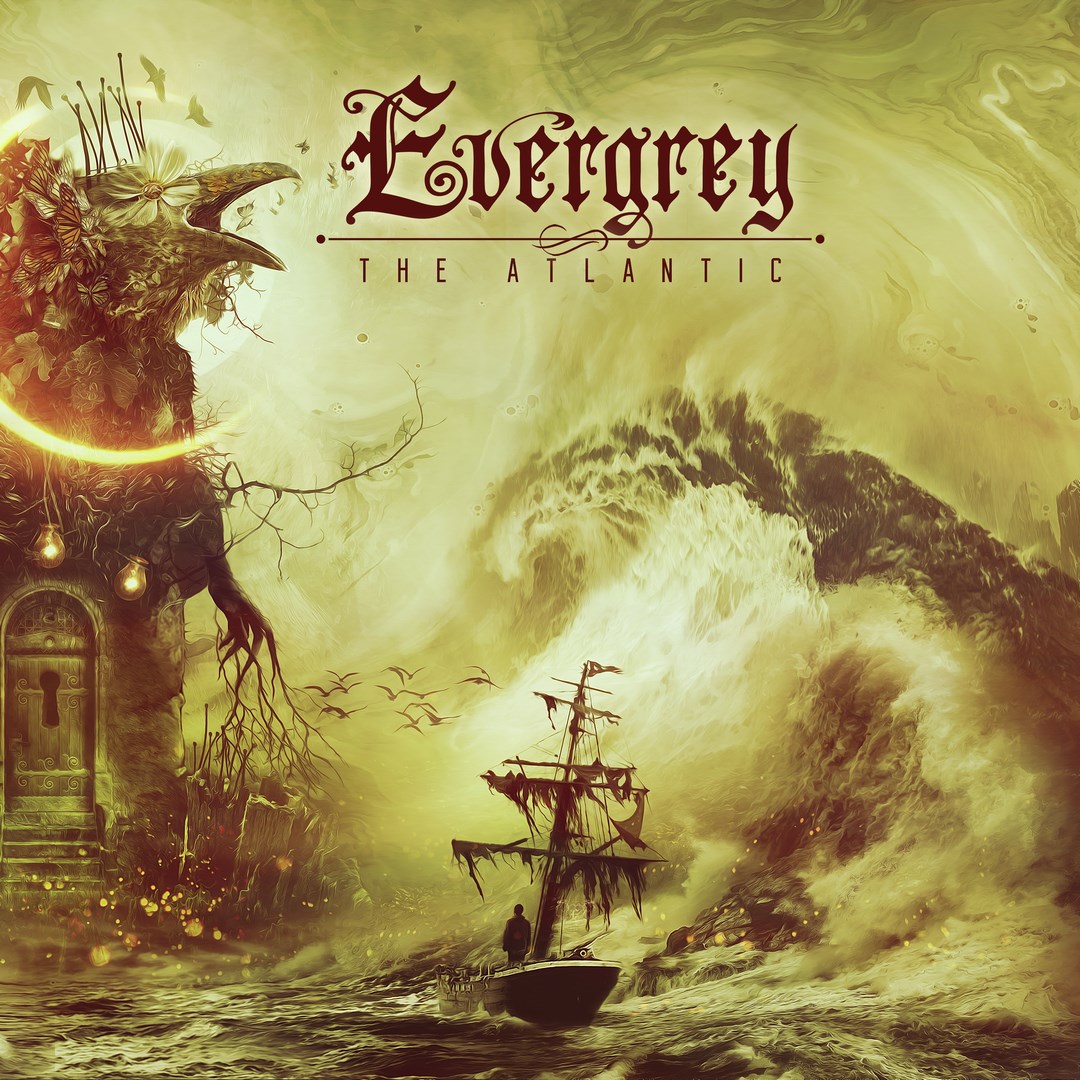 With the band surprising EU press with an interview stint to promote their 11th successive release `The Atlantic’, I found myself boggled preparing my interview. Not having heard anything other than fragments from their recording sessions, I really didn’t know where to start. Compiling my questions I received a mail notification, and there it was: The pre-listening stream of the new album, due to be released on the 24th of January, two months from now. Two months away still, but this is something I wanted to have finished a.s.a.p.

With Evergrey always delivering, it was not a question if the album was good, but rather “how good”. But I always carried prejudice towards their releases, hailing from my past. With their old(er) releases never being able to capture my attention front to back, I hoped the new direction chosen on `The Storm Within’ was continued and elevated on `The Atlantic’. The albums predecessor was breathing all of the band’s signature sounds and, on top, was injected with a profound sense of catharsis and élan, with more harmonies and melody than ever before. It was the majestic follow up to `Hymns Of The Broken’, the sprouted the Hymns concept. Let’s cross the Atlantic to discover new terrain!

,,A Silent Arc”, the album’s debuting single release, is exactly the opposite of what its title suggests. The song opens cacophonic with progressive and loud assaulting drums scattering in high pace. The groove is vigorous and the atonal riffs are impressive. The urge and tremendous drive of the opening returns in between slow creeping melancholic sections with impressive melodies upholding the progressive bodywork of the song. Midway the 7+ minute epic track, it spawns an impressive and captivating slower section with a piercing guitar solo and ominous keyboards and piano pulling it forward. Tom Englund appears to feel right at home as he belts his most impressive vocal work to date with him delving deep emotionally. The song appears to be benchmark for the album, which compels with impressive hooks and melody, contrasting with the harsh drive and anger-laden outbursts.

The turmoil spawned from the forceful opening of the album is endured when ,,Weightless” is released upon us. Buzzing low tuned guitars propel it forward, and the melody implemented in the refrain is impressive and adds to the grandeur of the melodic enhanced prog track. Guitars tuned in A hit with us nu-metal magnitude grooves, delivered with sterling attitude. Again the song shifts shape midway with sensible piano elements injected. Loud bass lines strikes contrasting from the lush riffs laid down take it into a steep dive as the song swings into a stop-motion paced fierce progressive corner, unleashing the bands impressive signature craftsmanship. Though its polyrhythmic shuffles contrast with the melodic underscore, the song feels remarkably comfortable.

,,All I Have” is the doomy melancholic and brooding anthem with balladesque pretentions, propelled by hard-hitting bass riffs complementing the staccato drum pattern and lush keyboard swirls. Though guitars are less dominant, they colour the grim landscape with impressive short chords spit. Sustaining chords outline the sombre mood erupting. Another melodic tinged solo flies from your speakers with both, Englund and Danhage displaying their impressive skills going head to head with motivic solos. The outro of the song wells out with both guitar players’ distinct sound fluently flowing into one another in an impressive melodic twin solo.

With the all over pace of the record being a lot higher than usual, ,,A Secret Atlantis” is the third song ripping up your eardrums. Johan Niemann’s loud ploughing bass coinciding with Jonas Ekdahl’s progressive and driven drumming are the backbone of `The Atlantic’, and the interaction radiates an intensely organic and vivid live atmosphere. Tom lays down an anger laden vocal line adding to the sonic lash laid upon us. Rolling drums fire it up with raw energy and the guitars shred ahead with blunt force. Evergrey’s maelstrom of emotions in unleashed channelling emotionally on multiple levels. Cinematic narration and sound effects are adding to the gripping atmosphere. ,,The Sky is Painted in Sorrow…” spells the agony of the lyrical content, and the song progresses onwards with towering and sophisticated grandeur.

Thank God the band holds its horses for the short lived interlude ,,The Tidal” which is the intro to the majestic progressive monster ,,End of Silence”, that again delves deep lyrically and musically. The carcass of the song is a lot like ,,All I Have” with loads of tempo changes and impressive hooks and melodies. Towering and pompous it evolves with Evergrey’s signature melancholic and dark drenched soundscape, throwing the listener off at any given moment. The difference with the band’s trademark tracks is the fact that the songs seem to progress and evolve in a more melodic and dramatic magnitude. Impressive melodic guitar parts contrast deeply with the ominous and bombastic keyboard sections, alternating power and passion, ambience and disconnection. This also spices up ,,End of Silence” and slings it into the stratosphere with its sonic exploration of melancholy.

,,Currents” is a lot more forceful with dominant keyboards and drums. Heavier in terms of turmoil rather than drama. It’s a lot less epical, with Tom’s vocals shifting emotions between the highly melodic chorus and the dramatic refrain, which is injected with fierce hammering snare drums accompanying the blunt riffs making it combust over and over, and over again. Focussing on the metallic side more than ever the band leaves no stone unturned with fierce and bold riffs hitting us, and impressive guitar solos and twin solos rousing from the songs. Dying out with chants the song brings us into the next chapter of `The Atlantic’.

,,Departure” starts with piano tingling from Rikard Zander over Niemann’s loud bass firing on all engines, perfectly colouring the palette for a moody and warm vocal performance. Lush riffs only roar their head during the songs chorus. It’s the intimate mood set, which makes this a standout track, perfectly balancing out the overall heaviness of the album’s concept. Though the song stretches for over 6 minutes, it feels so heartfelt passionate and frail, that it dies out withering before you can grasp for air. With the waves hitting the vessel in the outro of ,,Departure”, it builds up to a cinematic intro for ,,The Beacon”. A narrative voice over screaming seagulls and washing tides erupt in an overwhelming heavy intro. Ominous and taunting grim keys fly loosely amidst the fierce riffs, and Englund’s echoing vocals. It is exquisitely melodic, but also flowers with impressive pompous elements. Progressively pulling forward it is a repetitive motion of this album’s typical ingredients. Screaming solos and heavy progressive drumming plunge into the heavy and multi layered harmonies of the song’s bridge and chorus. Again the interaction and organic live feeling is pristine.

The album is brought to an end with eclectic drum and guitar interaction of ,,The Ocean”. Heavy progressions and whammy guitars with loads of chorus battling over the intrinsic drum patterns. It is not the average track, even though it bears the typical benchmark sounds and elements of the band. ,,The Ocean” has an intense dark sky cast over it and the marching keys underneath add to the gloomy atmosphere clawing deep in your head. Chants and heavy multi-layered keys make it die out over intensely dramatic guitar and drum hooks. The harsh and abrupt ending is exactly what adds to the dominance of the track and it has you instantly reach for the repeat button.

`The Atlantic’, though a 3rd chapter of the band’s concept created, is an album that stands alone, and stands on its own. Evergrey keeps pushing the envelope. With `The Storm Within’ being the album that finally won me over in its entire, `The Atlantic’ is the one that will land in my heart and head. It fuses the band’s impeccable craftsmanship and dark metallic ingredients with a modern and heavier progressive overall tendency. The urge of the album is gripping and the entire concept breathes fire. Though it has its (keenly implemented) slower paced tracks, the overall power and thrive is tremendous. Intense musical craftsmanship on display, `The Atlantic’ also embodies a captivating intense production adding up to the vibrant and vivid live feels. Interaction is polarized and especially Niemann and Ekdahl are delivering the grit and gravel that mark the significant heavier turmoil presented. The noise and turmoil provide Tom Englund the needed foundation for his emotional lyrical content, clearly affecting his performance positively. The guitar interaction with Danhage is phenomenal, and Zander’s swirling and ominous keys added colour the atmosphere intense and grim.

Evergrey fires on all engines, and its combustion is spawning one of the best albums to start off 2019.
`The Atlantic’ is a BEAST!