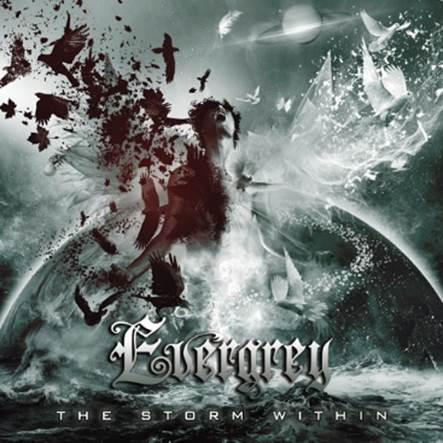 ,,When we were making this album a lot of these relationship issues were going on around me; people losing a partner or a loved one and grieving. `The Storm Within’ is about a search for identity, trying to make yourself full when you feel half empty, and I placed that storyline in an interstellar world.’’ Thus are the accompanying words of Evergrey’s mastermind Tom Englund on the band’s tenth album in their 20-year career.
`The Storm Within’ musically taps directly into the vein of the band’s impressive musical catalogue setting back it’s predecessor, the hailed `Hymns Of The Broken’, by a mile. The album combines the grandeur of the band’s elusive past with the present inflicting it with the right amount of grief and tragedy. Through the darkness and withered bitterness of Englund’s lyrics hope and elevation shine brightly. The dark metal outline and cinematic pompous overhaul are shooting the new release into orbit. Dramatic twists and turns are delivered with musical panache and perfection unmatched by any band in the field. Englund feeds off the storyline and inflicts the melancholic setting with his dramatic vocals. A dark and powerful pull with fierce guitar interaction spitting riffs, melodic choruses and dramatic vocal interaction topped off by brooding swirling keys, brought to the front of the mix for good measure. Shivers went up and down my spine with Evergrey revealing more of their qualities with every spin of the silver disc. The album simply keeps growing on you and grips the listener in a breathtaking stronghold. From the opening ,,The Distance’’ onwards you are taken on this stormy journey, furthermore empowered by cinematic genius Patric Ullaeus who signs for the graphic video. The sonic bombardment from Nieman and Ekdahl creates a solid foundation for Englund and Danhage to elevate the music with their excellent guitar interaction. An absolute live hammer is the high paced ,,My Allied Ocean’’ hammering away with double bass outbursts and jaw dropping guitar duels. ,,Disconnect’’ is another pearl on the crown, a captivating musical journey with melodic (pre) chorus distracting you from the musical progressive elements thrown around: Pompous and powerful.
The progressive melodic blending reaches a new height with ,,In Orbit’’ featuring Floor Jansen (Nightwish, After Forever). Stripped from the usual drama Jansen belts the duet evoking Englund’s best vocal work to date. ,,The Paradox Of The Flame’’ is another duet featuring Carina Englund’s crystal clear vocals in a dramatic setting with her husband. The tension is felt instantly and classical arrangements boosted by a violin section create a dramatic setting. Evergrey explores new terrain on the melodic, almost poppy, ,,Someday’’ which to me works perfectly. But it is the traditional band tracks that make fans go wild for sure. ,,Passing Through’’, ,,Astray’’ and ,,The Lonely Monarch’’ feature the band’s perfectly executed dramatic heavy metal, warping you back into the band’s first 2 albums.
Evergrey’s `The Storm Within’ offers the best of their long spanning career combined in one. A must for fans of the band and genre and all metalheads out there. It’s time Evergrey to claim their rightful place on top of modern metal’s charts.