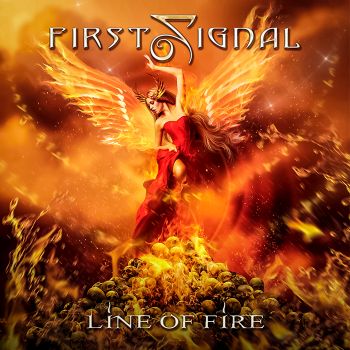 The third First Signal album ‘Line Of Fire’ is as its predecessors ‘First Signal’ (2010) and ‘One Step Over The Line’ (2016) again an impressive display of Arena rock/AOR and melodic rock. With Harem Scarem front man Harry Hess behind the microphone and producer/drummer/keyboardist Daniel Flores (Find Me) as main contributor First Signal brings us a familiar sound that is full of variation, superb vocals and intriguing melodies. After working on the 1st First Signal album with Dennis Ward, Harry Hess got teamed up with Daniel Flores by the people of Frontiers. As for the songs on this CD, they have been coming from musicians like Carl Dixon (Coney Hatch), Nigel Bailey (3 Lions/Bailey), Bruce Turgon (Warrior/Black Sheep/Shadow King) and various others like for instance Stan Meissner who recorded an album under the moniker Metropolis called ‘The Power Of The Night’ in 2000, an absolute peach of an AOR/melodic rock CD of which two songs (,,Walk Through The Fire’’ and ,,Never Look Back’’ ) were chosen to be re-recorded by Hess, Flores, guitarist Michael Palace and bass player Johan Niemann. By the way, former Harem Scarem drummer Darren Smith features on this album as a background vocalist, a guy with a great voice as well. Hess also contributed song material himself. If you like the first two First Signal albums ‘Line Of Fire’ will be well up your alley. The record is set up in such a way that even fans of heavy/hard rock could be interested as the songs are not only balanced but also from time to time up-tempo with great guitar parts from maestro Michael Palace giving First Signal enough credibility, power and toughness, being able to reach a large audience. And Harry Hess still sounds as great as in his early Harem Scarem days so there is nothing that should stop you from investigating this very convincing and very accessible CD.