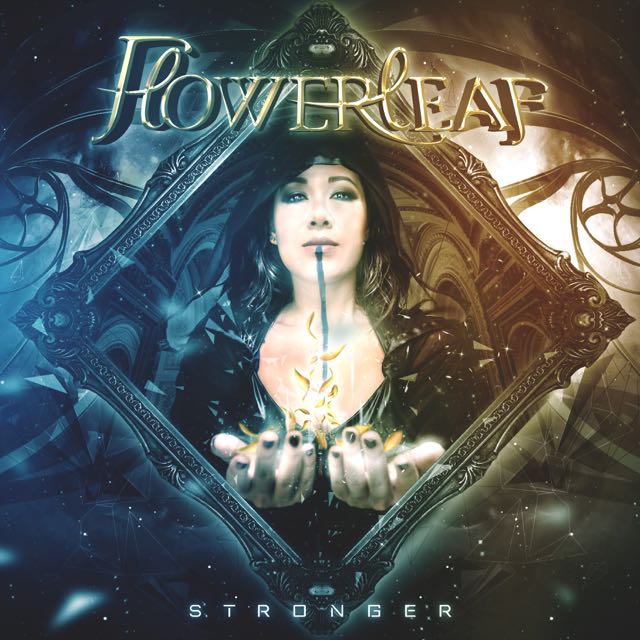 Female singer Vivs Takahashi and bass player Marcelo Kaczorowsky are the beating heart of Brazilian symphonic power metal band FlowerLeaf, but actually relocated to Germany. In 2017 the duo formed their band to realize a musical vision, which resulted in the release of debut album `Stronger’ last year. Because the band works independent and self-supporting, it was actually by accident I met Vivs and Marcelo briefly at a concert in The Netherlands recently and spontaneously got my hands on this CD. Vivs and Marcelo gave the impression to be very serious and dedicated about their music career, which definitely also shines through the well taken care of artwork and press kit. How about the music? `Stronger’ presents 11 tracks, which are mainly written by Vivs and produced, arranged, recorded, engineered, mixed and mastered by a third (guest) musician named Raphael Gazal. This guy also took care of all the guitar parts and overall I think his role in general is an important key to the end result. Especially his guitar approach and very melodic solo eruptions give the compositions an extra touch and shine. The voice of Vivs is the centrepiece of the album, she has a lot of sweetness in her presentation, but at the same time she sounds strong and confident. Like for instance Simone Simons of Epica, also Vivs vocally moves between a classical approach, high notes, `normal singing’ and emotional tenderness that capture a very pleasant sound. Vivs’ vocal lines have a clear purpose and (catchy) melody and I am convinced her performance will even grow stronger in the future. I guess it is difficult to stand out in the female fronted, symphonic power metal scene these days but I have a feeling that’s not what FlowerLeaf is aiming for. It seems they are not consciously trying to be original, bombastic or complex for the sake of it, they clearly focus on telling a story and follow an honest emotional journey that build up the music. During that journey Marina La Torraca [Exit Eden, Phantom Elite] appears in the driven ,,We Will Stand’’ and both voices blend really well together. Another guest appearance happens in the heavy loaded ,,Not My Fault’’ in which Mylena Monaco growls and grunts to spice up the dynamics. Out of all the heavy and faster songs to me the furious sounding ,,Firesoul’’ is the real anthem here and out of the softer and compelling tracks, ,,Girl In Pearls’’ and the melancholic, orchestrated ,,The Flower And The Leaf’’ are instantly my favourites. I noticed that Vivs and Marcelo in the meantime found themselves a guitarist [Noelle dos Anjos] and drummer [Murilo Frade] to form a real band and play live. I’m curious where all this will lead to…