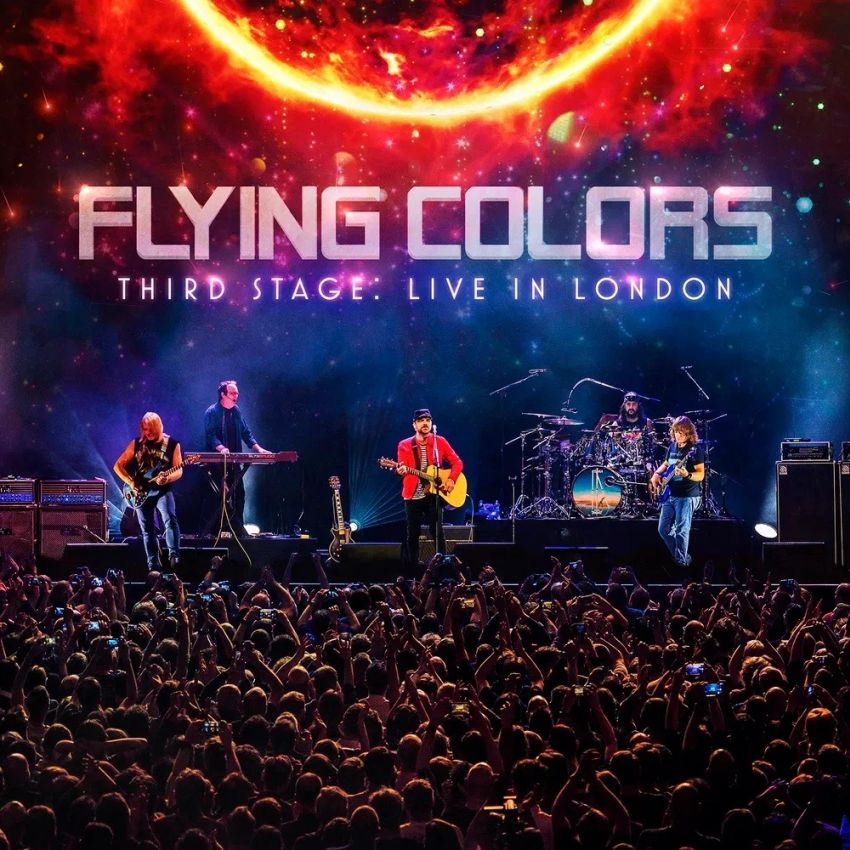 It has become more a less a little tradition for Flying Colors. Whenever there is a new studio record like the last one ‘Third Degree’ the band records and films a show or two while on tour. Some might say that is overkill and that might be in some sort of way true. But the five band members have some many other commitments in various other groups and projects that there is usually just enough time to do just a very short tour, so not everybody that would like to see them has actually the chance or opportunity to do so. So a new live CD/DVD is done whenever there is a new album out so that all fans are able to catch some of the action. I mean drummer Mike Portnoy has several projects and bands on the go, guitarist Steve Morse’s main concern is Deep Purple, bass player Dave LaRue, singer/guitarist Casey McPherson and keyboardist Neal Morse also have other things on the boil. Critics might say that fans are confronted with live-releases where several older songs keep coming back (like ,,Kaya’’). All true but still we are not talking about a bunch of money grabbing musicians here. Although I have not seen the images for this release I am pretty sure that it will look spectacular as the music on this release is exactly that. Several old songs are now accompanied by some tracks fresh from ‘Third Degree’ like my all-time favourite Flying Colors song ,,You Are Not Alone’’, a song that is carried by the emotional voice of MacPherson, so fluent, so breakable and oh so gorgeous including that wailing guitar of Steve Morse. The only track that I am missing from ‘Third Degree’ is ,,Last Train Home’’, another superb highlight from that album but that is richly compensated by great interpretations of the tracks ,,More’’, ,,Love Letter’’, ,,Crawl’’, ,,The Loss Inside’’, ,,More’’ and ,,Geronimo’’ mixed with older songs like ,,The Storm’’, ,,Peaceful Harbor’’, ,,Infinite Fire’’, ,,Mask Machine’’ and ,,Forever In A Daze’’. Available is various formats (the BluRay seems to contain some extra material) this release is more than likely the best concert you will see in 2020 and that from your own home. This compensates some of the pain we all suffer of not being able to see our favourite bands in concert. Do I really need to mention that the execution of the songs is beyond imagination and that the sound is immaculate? That all instruments including the bass of Dave LaRue sounds like there is no tomorrow? What are you waiting for people? Get your own copy and get into the Flying Colors zone once again.