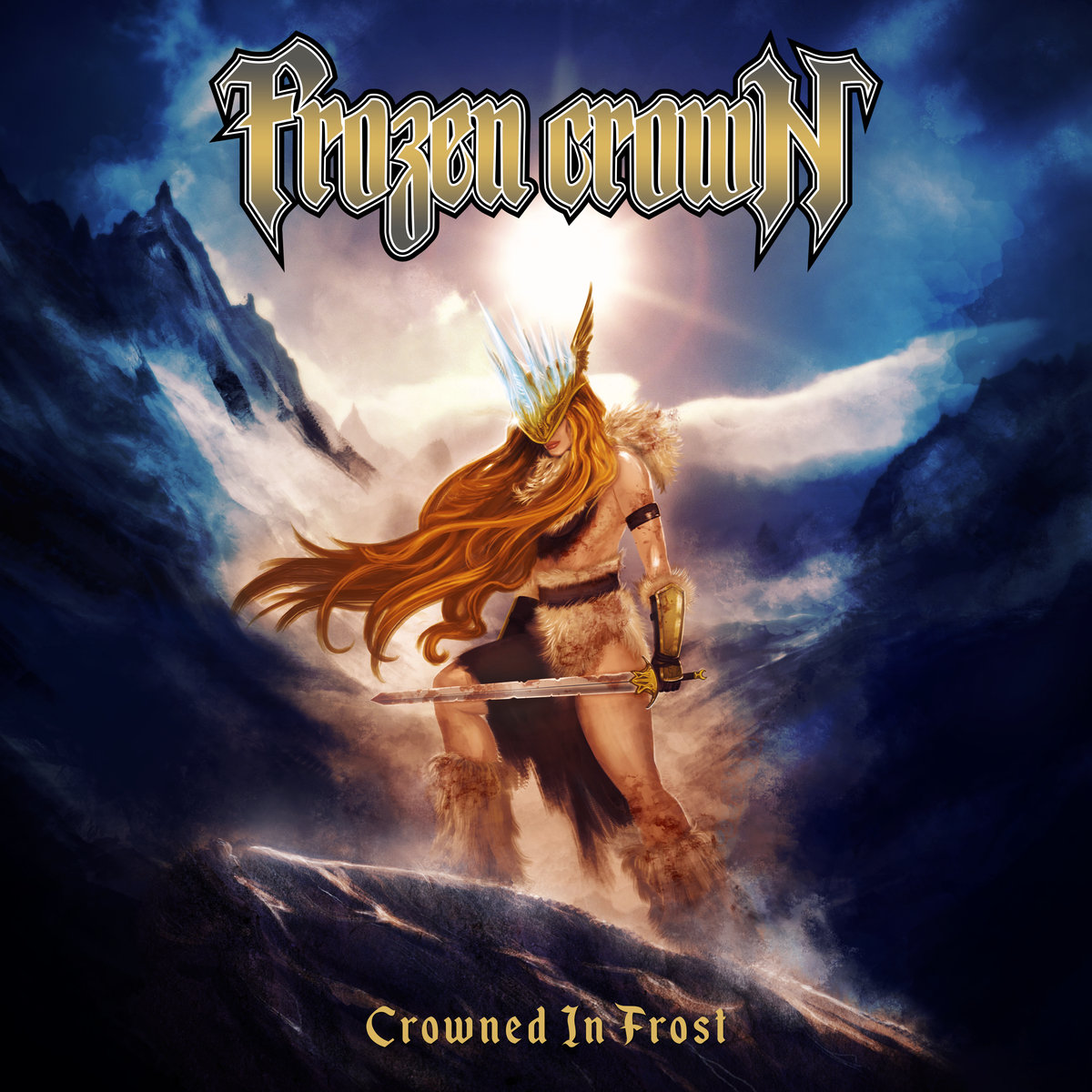 Frozen Crown is the young power metal band lead by Frederico Mondelli (vocals, guitar, keyboards, songwriter) and fronted by the talented female singer Giada `Jade’ Etro, releasing this second album within a year after the debut ‘The Fallen King’. With the debut collecting stellar releases, and the band’s video channel being flooded by likeminded fans, the band seized the moment to establish their name more firmly with the brand new ‘Crowned In Frost’.

The band moves in the female fronted epic metal genre but stands out with their imteresting blend of classic powermetal shreds and fierce speed metal-like powerbursts. Though they don’t wander off in the classical direction too often, the band manages to maintain a high level of enthusiasm radiating off the edges of this silver spinner. Much like the genre leaders Frozen Crown also packs tremendous wallop and draws from fantasy stories implemented in their lyrics, pushing them into a cinematic direction occasionally. The turmoil is tremendous and action packed, with excellent double bass drive laid down in front of the mix frequently. The guitar work is exquisite and pulls forward with great drive and harmonies. Topping off the spiced up metal dish Giada Etro belts an impressive job. Not delving into genre specific soprano heights, she delivers a more metal voice with gothic grandeur. It is mega melodic, high end, and insanely comfortable. Of course she reeks of the infamous genre defining frontwomen, and she does stay loyal to those, but Etro simply is a stand-alone force. All songs performed with intense devotion. Recognizable songs that sink in upon second and third spin, revealing the defining Frozen Crown style. Yes, you have heard music like this before, and sure it is a rather predictable genre they operate in. But by all means, Frozen Crown executes it with such devotion; it will knock you off your socks. It packs enough power to attract listeners from more classical metal genres, as well as sympho goth adepts. ,,Lost in Time” is an example of the symphonic strength of the band as where “Unspoken” reveals subtle details of their NWOBHM influences. From the tasteful intro onwards, the band dives into this excellent album with hammer hard combusting tracks like ,,Neverending”, the drum driven ,,Battles Of The Night” and the galloping melodic ,,Winterfall”. Intense guitar harmonies and solo’s are fired upon us frequently, The epic grandeur is present, as are the slick melodies and choruses. Cutting a corner with the cinematic instrumental ,,The Wolf And The Maiden” Frozen Crown burst into flames again with the high velocity ,,Forever”. The song is pulled forward with intense wallop but unravels in beauty with multi-layered bridge and choruses. It fuses genre specific elements with a bionic drive, reminiscent to Amaranthe and Kalidia. Though Giada has to really delve deep, stay stays upright firmly, even in the higher registers. ,,Enthroned” is another (short) ethereal intro building up tension towards the band’s grand finale, the 6:33 titletrack which is packed with impressive drum salvos opening to the impressive riff duel. Another stellar track fusing all elements of the above mentioned genres and it also has Mondelli grunting in death metal manner.
The album is a perfect album closer. Those in need of extras need to pick up the Japanese edition of the album, which features an extra track ,,The King’s Rest”, an instrumental piano track matching the atmosphere of the story depicted by Frozen Crown.

For many Frozen Crown might be frowned upon as ‘just another female fronted epic metal band’, but I would strongly advise to listen in. Frozen Crown does operate within the narrows of the genre, but also injects impressive musical wizardry and classic metal elements, making their music move sideways as well. Remeniscent to Amaranthe at times, pushing the envelope much like Sonata Artica overall, Frozen Crown does deliver another stellar album.