GALACTIC COWBOYS-Long Way Back To The Moon 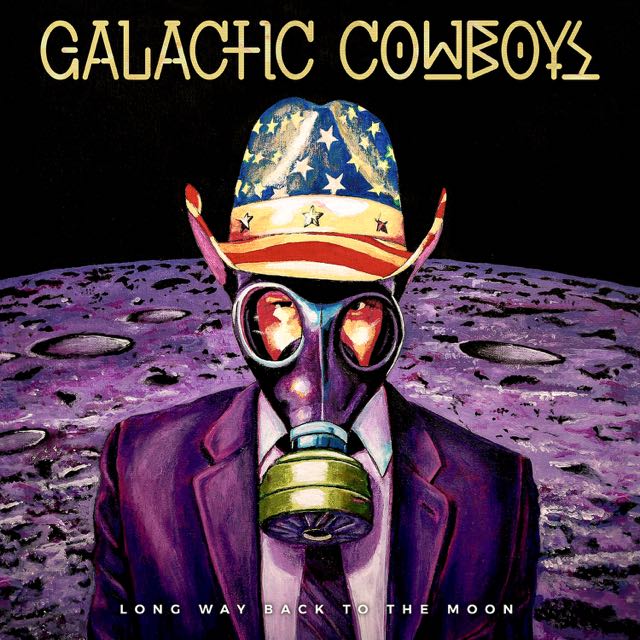 GALACTIC COWBOYS-Long Way Back To The Moon

My God, am I glad my intensely growing musical anxiety is fed with new music from one of the most criminally overlooked bands ever: GALACTIC COWBOYS!
`Long Way Back To The Moon’ resets time and resets the sonic landscape of musical stubbornness warping me back into the comfort of the band the world will never be ready for. Galactic Cowboys re-joined forces in their classic line up to once more overthrow the musical masses and inject discomfort into the mind of all those who dislike cross blending and diversity of styles.
The axis around which their music turns is tilted and shifts with every drum kick, much like it did in the past. Galactic Cowboys instantly grip back to their truly unique approach and their unmatched talents to create disrupting hard rocking songs with Beatlesesque close harmony choruses. They blend their cocktail of heavy metal and melodic styles as easily as Mariah Carey lip syncs the shit out of her million selling pop tunes.
Mind boggling sonic tapestries once again too complex and highbrow for the masses, but fused with Beatlesesque three-part vocal harmonies to give it the exact amount of comfort to get into the ponderous grooves of Doss and his merry men. The rhythm is wildly fluctuating over the course of this new endeavour and switches from knuckle busting trash to pompous progressive, stoked with fierce riffs and textured guitar symphonies. The vast array of sounds sets off and sling shots into orbit immediately when the band unleashes the slow moving ,,In the Clouds” followed by the upbeat ,,Internal Masquerade”. The combination of melody and crunch is impressive and facilitates for inventive song writing and always-eloquent lyrics. Trademark stop-start riffs return on ,,Blood In My Eyes”, with Ben Huggins flexing his vocals aggressively around the steep curbed blunt riffs. Bass pumps the following ,,Next Joke” forward underneath towering vocals that also launch the thrashy ,,Zombies”. Again the music morphs and shifts with 3 dimensional pretentions. The album keeps piling highlights such as ,,Agenda” and the pretentious and marvellous title track, with the Cowboys battering the sonic landscape like they did in the past. The melodic nuances are impressive, the quirky sense of humour present. They even unleash a ballad upon us with the awkward but ethereal ,,Amisarewas”, though I can’t stop thinking they hint at the cheesiness of the genre rather than be loyal to drama and romance. ,,Hate Me” is as Galactic as it can get with Henry Rollins’ anger packed blunt force over the typical harmonic nuances of The Beatles. Harking riffs spit dirt as the neurotic ,,Losing Ourselves” and ,,Believing the Hype” enroll towards the sonic boom of ,,Say Goodbye to Utopia”. It ends the album euphorically and has one reaching for the repeat button frequently. `Long Way Back To The Moon’ scratches your senses and nests into your head upon first spin. The album easily surpasses `Machine Fish’ {1996] and links more easily to their majestic debut. It is musically as Galactic as the band has always been, but it won’t land them stardom. I’m afraid Galactic Cowboys will remain obscure… and perhaps that is why metal-music aficionados will hold them in their hearts forever.