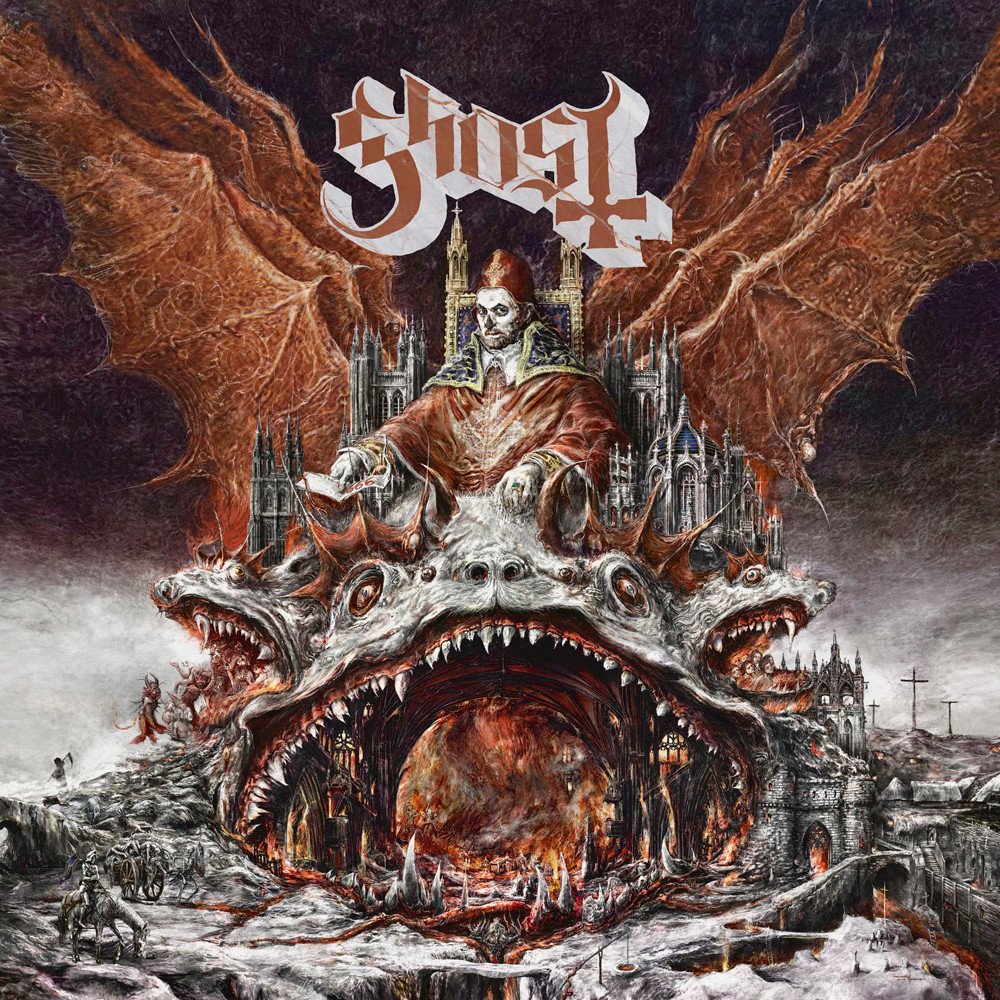 My my, what a lot of controversy has surrounded Ghost the last couple of years. The Swedish rockers dressed up to the max and becoming really popular as well had a singer in Papa Emeritus and a bunch of instrumentalists called Nameless Ghouls. Several musicians unveiled their true identity after they sued their dear Papa for not paying them their rightful share. So even Papa Emeritus had to come clean about his own identity being Tobias Forge. The man claimed that Ghost was a one man project in which the musicians for the studio and live were hired hands. Nothing more, nothing less. At the end of 2017 Forge started the recordings of the fourth Ghost album with new Nameless Ghouls while creating a new identity for himself in the person of Cardinal Copia making it possible to change costume, make up and other relevant things for his appearance. Speaking for myself these dress up parties by any band in the music genre has never impressed me. Sure, it gives the viewer something to look at whether the band is called Lordi, Kiss, GWAR, Crimson Glory or Ghost for that manner. I find it just amusing that grown people find it necessary to dress like a clown, a demon, a Santa Claus or whatever. Sure it will help you get noticed but for music fans it is and always will be about the music you bring, whether you can impress people within their own four walls with your songs, your arrangements and your musicianship and sound. And prove yourself on stage. That is what it is all about and nothing else. Maybe that is the main reason that I never went for Kiss although they have made some cool records like ‘Monster’ and the legendary Kiss ‘Alive’ albums. Looking though all the hype the musical body of most of these bands was just a skinny skeleton although Crimson Glory and sometimes Kiss were the exception to the rule. The same goes for Ghost. ‘Prequelle’ has a theme that is loosely based around death and doom but the music is not so heavy at all. On this record Forge and his anonymous tribe present a musical cross between rock, AOR, a big snippet of progressive rock and a touch of metal. In fact, songs like the instrumentals ,,Miasma’’, ,,Helvetefonster’’, ,,Witch Image’’  and ,,Life Eternal’’ are quite mellow and melodic. Must say that producer Tom Dalgety and mixer Andy Wallace have given ‘Prequelle’ a clear sound but based on the music presented by Ghost on this record I find the band far from scary or sinister. For me Ghost is a band that gets noticed because of their looks and presentation, the music on this record is okay but is it really impressive? Hmm…..