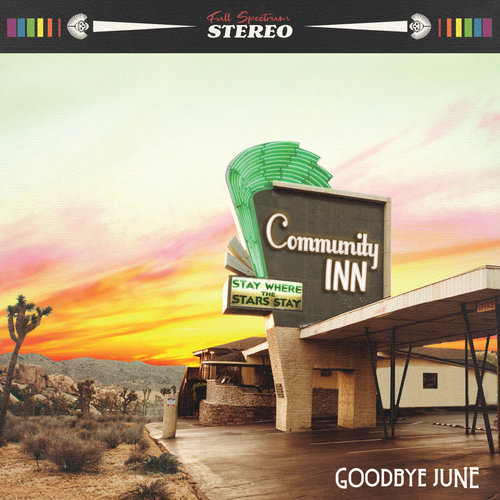 I was pleasantly surprised when Nashville cousins Landon Milbourn (vocals) and the guitarists Tyler Baker and Brandon Qualkenbush released their predecessor ‘Magic Valley’ about two years ago. A fine rock record where the band showed multiple musical faces reminding me somewhat of Rival Sons. The band had signed a deal with major company Interscope and I already expressed my doubt whether a major company would be able to market and promote the album properly. It comes as no surprise that the trio has now signed with Earache Records, a company that started out as a pure metal and extreme record label. That image has changed through the years so maybe Goodbye June has found a better home to develop their music and their career as it should be. Also on ‘Community Inn’ the trio mixes things up. Southern rock, classic stuff, some alternative tunes…. It is a potpourri of styles that quite possibly could please fans from Rival Sons, Led Zeppelin and even a fan of Greta Van Fleet might like this. Landon Milbourn has a very specific voice, melodic, yet at stages high pitched but not as rough as Brian Johnson of AC/DC of Josh of Greta Van Fleet. He moves more in between these two singers and puts his mark on the music in a more than remarkable manner. At stages you have the feeling listening to several different bands. Take for instance ,,Be Yourself’’ a very distinctive sounding song with choirs and a more alternative approach. A track that could have been on a Zep album. But then the bands rocks and rolls heavy and wild on several other songs (the first three tracks on the album really kick ass) before switching things around again. I must admit that my preference lies with ‘Magic Valley’ as ‘Community Inn’ has a few songs in store that not really impress (,,Switchblade Heart’’ is too poppy for me) plus the fact that it seems that Goodbye June on this CD has a problem finding their real identity. Not saying that Goodbye June has produced a less album but my overall feeling goes towards ‘Magic Valley’ as that album seems to be more cohesive in songs, style and sound. But I could well be mistaken……