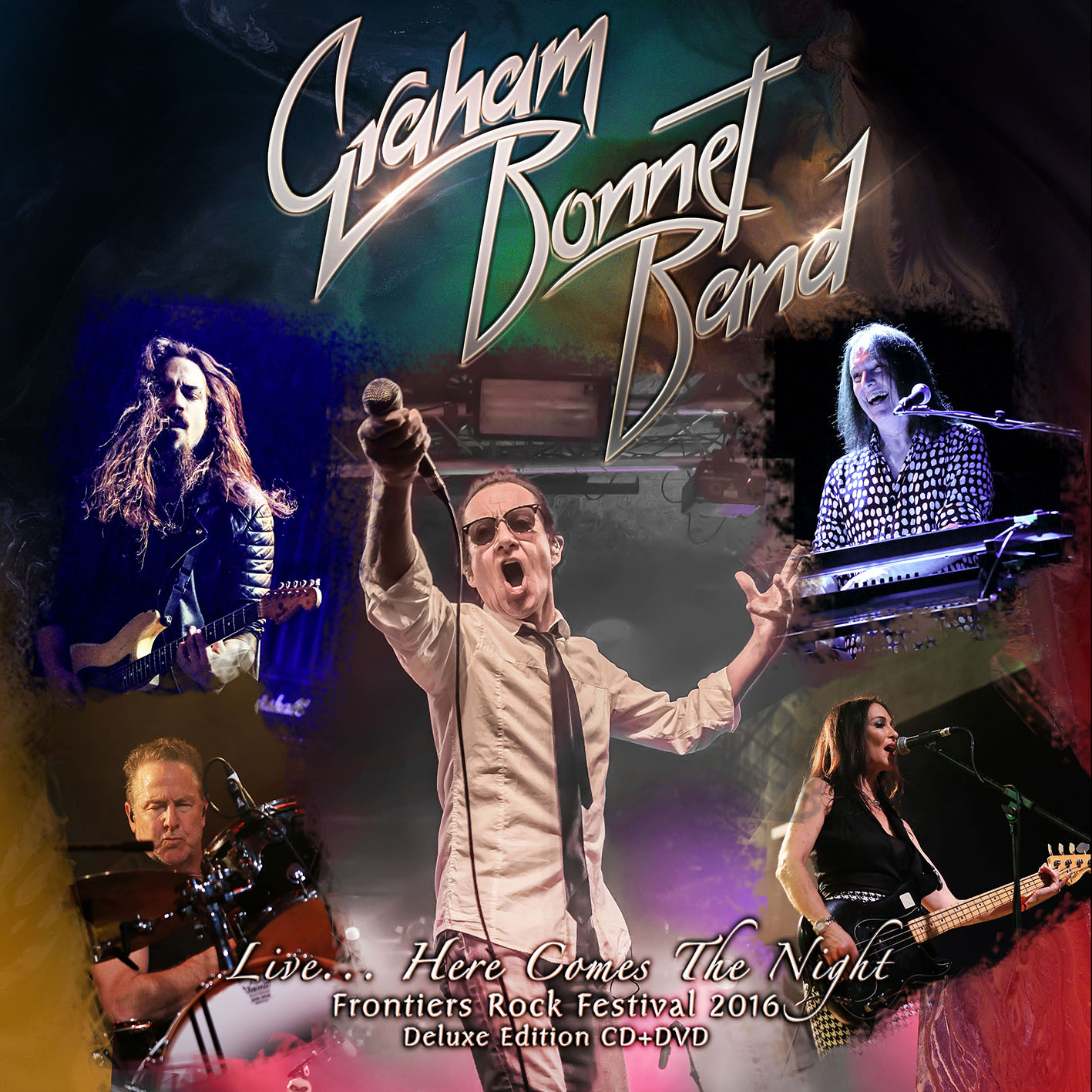 You can truly say that Graham Bonnet has made a glorious return to rock and roll. Look at the facts… He was involved with the Michael Schenker Fest release, launched his own band and 2-CD ‘The Book’, very recently recorded and released a CD with Italian guitarist Dario Mollo under the banner Ezoo, toured with his own band and now brings out a CD/DVD of a show his band did at the Frontiers festival in Italy a few months ago. So that is four releases within about six months or so. Overkill or not? Well, that is up to the potential customers and fans I guess. I have always been a big fan of Bonnet, I even have some of his pop releases he did in the seventies. ‘The Book’ consisted of a CD with completely new material and a CD on which he re-recorded stuff from the heavy bands he was involved with in the last four decades (Rainbow, Alcatrazz, MSG, Impellitteri). On ‘Live…Here Comes The Night’ we are being confronted with the past of the singer who is getting on in age (69 years old) but who has found new energy and stamina. But this release raises questions. From the new songs that Bonnet recorded with his band (drummer Mark Zonder, guitarist extraordinaire Conrado Pesinato, keyboardist Jimmy Waldo (not too sure if he is still with the group) and bassist Beth-Ami Heavenstone) not one (!) is featured on this CD/DVD. Why? I can understand that when you play on a festival you like to give the audience material that they might know in order to create familiarity, but on the other hand you might start to wonder if The Graham Bonnet Band is just a vehicle to play some old stuff. It is also a bit insulting towards your band members as now they just play other bands songs, while their own songs are ignored completely. Strange. Anyway, it is what it is. This release shows in more ways than one that Bonnet himself as singer is far from over the hill, he still delivers with power although you sometimes have the feeling that when he goes into the higher regions it gives him a bit of trouble every now and then. His musicians are just doing a good job, especially Conrado Pesinato plays the stuff that was written by greats like Yngwie Malmsteen, Michael Schenker, Steve Vai, Russ Ballard or Ritchie Blackmore with ease. Don’t know what it exactly is, but Graham Bonnet has always been able to get involved with great guitarists and songwriters and yet again he has found another legend in the making with Pesinato. I have not seen the DVD images as I write this but the music sounds more than acceptable. Here and there it might be a bit wobbly when Graham turns up the ‘hight’ but the integrity of songs like ,,Since You’ve Been Gone’’, ,,Lost In Hollywood’’, ,,God Blessed Video’’, ,,Dancer’’, ,,Eyes Of The World’’, ,,Stand In Line’’, ,,Desert Song’’, ,,Islands In The Sun’’ and ,,Will You Be Home Tonight’’ is kept in full. There are no strange new arrangements or something like that, the band sticks as close as possible to the original versions. And yet again, without wanting to exclude the other instrumentalists or the epic Graham Bonnet himself, I have to conclude that Conrado Pesinato is the real ace in the hole on ‘Live…Here Comes The Night’!