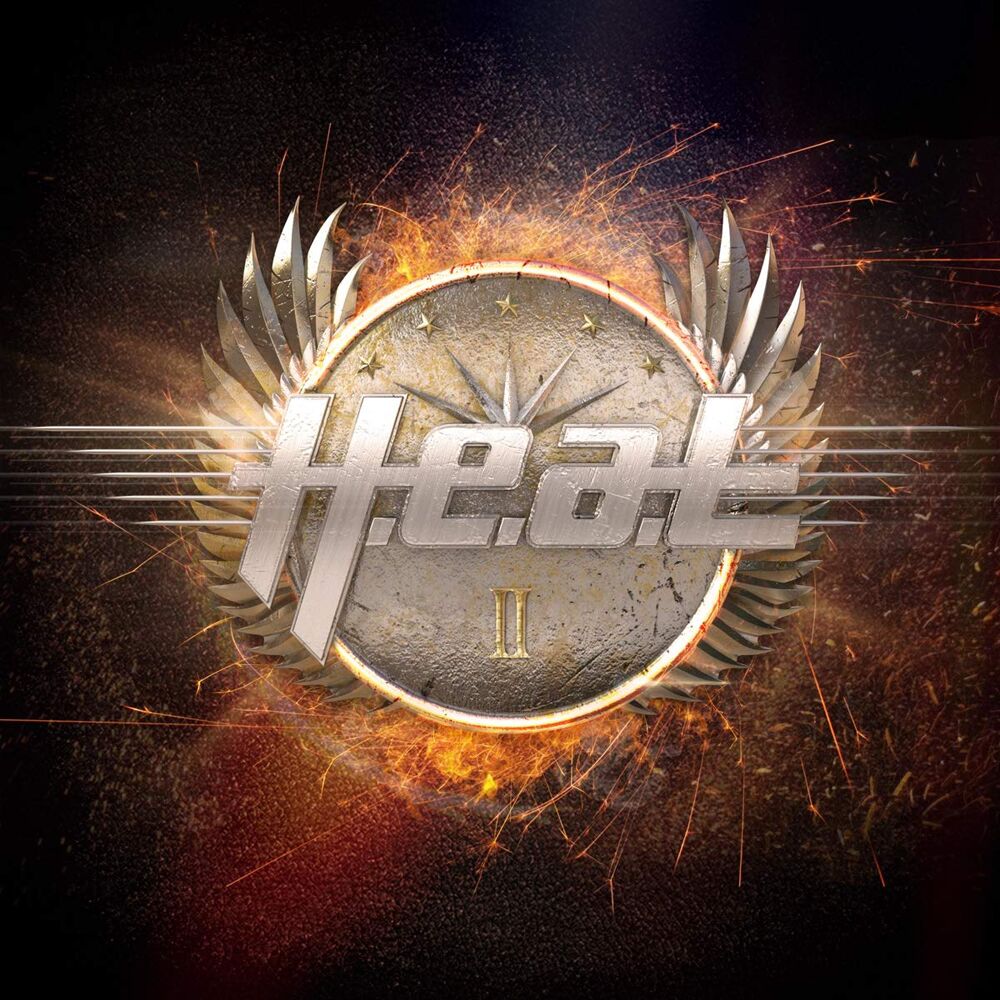 `Into The Great Unknown’ immediately nested in the comfort of my ears and my AOR / melodic rock collection. It finally made H.E.A.T to the standout band they also proven to be onstage. Where all of the previous albums had great moments and momentum, ITGU was the album that perfectly fused their vision with the top-notch quality and craftsmanship of their performances. It blew life into the dream the band has set out to come true over the last 12 years. `H.E.A.T II’ is their 6th consecutive studio album and it picks up where ITGU left off. Pushing the envelope once more and impacting like a comet.

Entering the arena with ,,Rock your Body” is the perfect choice as an opening track to `H.E.A.T II’. The song swizzles with keys that stir up to high and dense musical pomp. The track flourishes with rich orchestration reminiscent to the `Hysteria’ days of Def Leppard. Gaining momentum it unloads in a head nodding and fist pumping area rocker that will be a perfect show opener. It is that insane momentum that is present all over `H.E.A.T II’. The untameable energy, the drive and musical marksmanship aligns completely making this their ultimate album off the bat. Starting the car on ,,Dangerous Ground” makes the engine come alive even more with H.E.A.T spitting fire rather than radiating heat. Erik Grönwall is the perfect vocalist to put it all into place. He is the exclamation point on the music with his agility and raw energy. The move from Leckremo to Erik now even makes more sense as he belts the perfect job. All over the board is Jona Tee with his tastefully embedded keyboard swirls. Not only does he add the density in their crystal clear powerful sound, he also pumps up where needed. Dave Dalone happily adds his impressive solos and riffs. The interaction is simply superb and is only overpowered by Don Crash’. Tremendously staggering performance. Double bass kicks alternate with drum and floor dynamics much like prog drummers. The funky low end is provided by Jimmy Jay who is present and pasted the openings shut. It is the well-gelled machine that has taken the world’s stages by storm that also radiates of the new tracks. The soundscapes are ravishing beautiful and perfectly produced by the band themselves. Switching to a different style H.E.A.T fires up the keyboard driven ,,Come Clean” to display their enormous capabilities in song writing. The diversity of compositions is depicted by the following ,,Victory” with its storming opening of compelling guitars and pompous keyboard turmoil emphasized by the scattering drums. The song unfolds with powerful classic hard rock elements and a slick melody and vocal line towards the hymn like chorus. It is Grönwall belting another impressive job as he works through the musical extravagance. The guitar solo again perfectly falls with tune when it pitches fret board magic into the revamping vocal line. Followed by ,,We Are Gods” is almost pretentious, as if the Swedes are aware of the status of the execution. Grönwall powering up with ominous power as the song slowly progresses with power and persistence, much like a heavy metal hymn. Jay’s throbbing bass taking centre stage alongside the rock solid heavy riff and the powerhouse vocals. The solo is fierce and perfectly adding to the sutra of this exiting track. Injecting a shot with ,,Adrenaline” H.E.A.T puts their foot down for a higher pace with more clean transparency. The density is waved for the dynamics and clean delivery of the song. With the vocal line empowered by the keyboard line it unloads in slick, somewhat predictable, melodic magnitude. Going more pompous again on ,,One By One” with typical H.E.A.T elements, the track enrols with insane melodies and exquisitely alternating between pomp and heavy rock. The chorus is slick and polished, contrasting with the heavy plough of the bone shaking riff and drums. ,,Nothing” is the mandatory tearjerker of the album. Tastefully orchestrated it slowly builds up tension to hit its power ballad mark midway in. Swirling keys takes into another benchmark `H.E.A.T II’ track that balances out the band’s ingredients perfectly. Bass and drums are again in great harmony and guitars firing striking riffs towards the flourishing melody of the chorus. More dynamical is the entrance of the hammered ,,Under the Sun” that again displays the band’s insane qualities. Catchy melody and vocal lines with astonishing dynamics propelling it forward. It feels comfortably instantly but is so keenly crafted with progressive dynamics, it is standout. Sugar-coated choruses and piercing howls add the drama to orbit the track. It takes off frequently and its solo is just jaw dropping. ,,Rise” closes the album in style. Fuzzy keys announce it and the song is shouted alive by Erik, after which guitars and drums take centre stage again. Crafted around another slick hook the song oozes comfort and its appeal is tremendous.

H.E.A.T is dynamic and fires on all engines throughout the entire album. Well-balanced tracks and fuzzy melodies are fused with insane dynamics and powerful executions. There’s a distinct progressive note that makes it less predictable without affecting the arena rock appeal. The power is tremendous as are the melodies and slick choruses. `H.E.A.T II’ is the band’s best album for sure and might well be the absolute best melodic rock release of 2020 already. Melodic heaven!
—
HBLS Fun Q&A with Erik Grönwall here